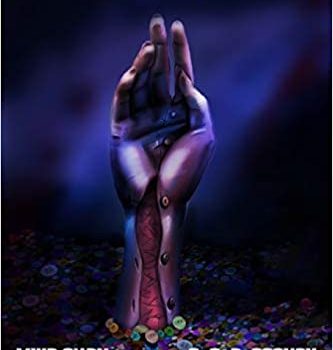 Mike Allen’s Mythic Delirium is one of the smaller presses which sustains our field by publishing original anthologies and story collections. He has put out A Sinister Quartet, an anthology of four novellas (well, three novellas and a novel!) by himself, C.S.E. Cooney, Amanda J. McGee, and Jessica P. Wick. Cooney’s ”The Twice-Drowned Saint” is fully novel-length at perhaps 60,000 words. It’s as extravagantly imagined and lushly but playfully written as we have come to expect from Cooney. Ishtu is a Saint in the town of Gelethel, which is ruled by 14 Angels (the 15th having left). The Angels provide well for their subjects, but rule them closely and are terribly cruel. Ish’s Angel, Alizar, is something of a rebel, and the ally of Nirwen, the departed 15th Angel. Ish’s mother is very rich, but is now very ill. Her father is a rare immigrant to Gelethel, a would-be filmmaker who instead founded the only movie house sanctioned by the Angels, which plays the same movies over and over again – and Ish now runs this place. Ish has Good Uncles, who serve as Hosts for the Angels and carry out their edicts, and Bad Uncles, who are rebellious and playful. (The two sets of Uncles, of course, are one and the same.) If all that seems complicated, it is, and it’s only the start!

The action turns on the arrival of a boy, Luzarius, who is ready to offer his sister Betony as a sacrifice to pay for the right to immigrate – something the Angels delight in. The sacrifice is accepted, and Betony is drowned, but Alizar has other plans, for Betony too is a Saint: she can see Alizar, and so Alizar resurrects her. Naturally Alizar’s other Saint, Ish, will be enmeshed in his plans, which are revolutionary. Ish befriends Betony and, to her surprise, is forced to help Luzarius as well. Ish’s own plans involve leaving Gelethel to help find a cure for her Mom and to free her Dad for his own dreams. But what about her beloved Good Uncles? And now Betony and Luzarius? And of course Alizar.

This is lovely and fascinating work, though it didn’t fully come together for me. It might be one of those stories that should be longer or shorter, probably longer. I felt that the most central characters, Ish and Betony, oddly didn’t quite come fully to life, even as Ish’s parents and uncles, and minor characters like Nea the Zilch, really blossom. And the plot, very involved at the beginning, unravels a bit quickly at the end. All that said, the lovely and fascinating aspects matter the most!

I expect great things from C.S.E. Cooney, but I am less familiar with Jessica P. Wick, thus ”An Unkindness” was an unlooked-for thrill. Ravenna is a princess, worried about her brother Aliver, who suddenly is not himself, disappearing at nights, a mysterious darkness in his room. So (of course!) she decides to follow him, and we see the strange underworld he enters, and the fairy ball, the glittering woman, Aliver’s fate, that he seems unwilling to escape. And then the duel. All this is familiar ground, but told so delightfully – Ravenna’s voice is wonderful, and the imagery, the descriptions, and the characters are beautiful. Really fine work.

As long as we are discussing Mike Allen and his Mythic Delirium Books, let’s briefly note his own collection, Aftermath of an Industrial Accident. Allen is primarily a horror writer, and most of these stories are horror. Three are new, and I found, not surprisingly, the least horrific of these the most interesting: ”Blue Evolution”, about a team exploring a strange planet who are attacked by alien plants. But the local lifeform turns out to be the real menace – fortunately, the explorers have a defense prepared…. It’s kind of goofily imagined, in a way that doesn’t really hold together but does hold the interest. 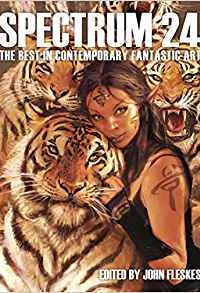