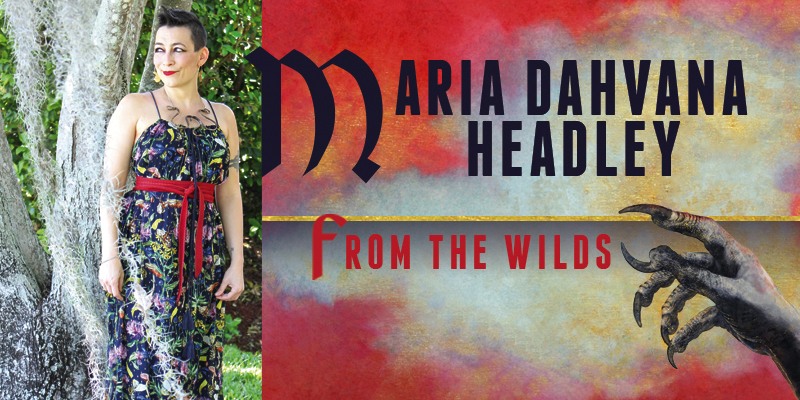 MARIA DAHVANA HEADLEY was born June 21, 1977 in Estacada OR. She attended NYU, where she studied dramatic writing.

Headley’s first book was memoir The Year of Yes (2006), chronicling a year in which she said “yes” to every person who asked her on a date. Story “Give Her Honey When You Hear Her Scream” (2012) was a Nebula Award finalist, and other notable short works include novella The End of the Sentence (2014, with Kat Howard), World Fantasy Award nominee “Little Widow” (2016), and Shirley Jackson Award finalists “The Traditional” (2013) and “Adriftica” (2018). With Neil Gaiman she edited an­thology Unnatural Creatures (2013).

Her debut novel, Queen of Kings (2011), is a historical fantasy about an immortal Cleopatra. YA Magonia appeared in 2015 and was followed by sequel Aerie (2016). World Fantasy Award nominee The Mere Wife (2018) is a literary reimagining of the Old English epic Beowulf. Her latest work, a new translation of Beowulf, is out this month.

Headley lives in California with her part­ner and son, but they will soon relocate to the Carolinas.

“There are lots of translations of Beowulf out there – the scholar Marijane Osborn listed over 300 translations and adapta­tions in 2003. The first scraps of it were translated into English in 1805, but the majority of the 19th-century translations came out mid-century to the late Victorian era. Those are the ones everybody studied to get to the next genera­tion of translations, which hit in the early-1900s, and then another generation took us through the 1960s. That ends up with Burton Raffel’s 1963 translation, but it has Tolkien’s 1920-26 version in the middle of it, though that wasn’t published until 2014. Raffel’s is the one most of us read in high school. It’s a poetic translation, and actu­ally quite beautiful. Seamus Heaney’s version came out in 1999, so it’s 21 years old. I was at the end of college when it was published, and it was the known cool translation, the one I was slavering to read. Those are the main, major ones. The ones from the early 20th century still have that Victorian ‘noble’ language, a certain kind of medieval courtliness, along with a desire to honor the true obscurity of the kind of poem it is. They wanted it to feel weird and Old English. Unfortunately, it’s hard to do that with the meter of Early English verse – let me interrupt this to say that until recently, we’d probably have used the word ‘Anglo-Saxon’ to refer to this poem, but there’s been a big discussion (led by the group Medievalists of Color) about the white supremacy inherent in that phrase, and about white supremacists using those words, in order to claim Early English verse as their national treasure. It’s tempting for white supremacists to say, ‘Anglo-Saxon, that means us, we’re white heroes. This is white verse, for white people, it is our birthright.’ They’re wrong, of course. The medieval world was very diverse, and integrated, and I’d argue that Beowulf itself is about othering and monsterizing, and critically about the moral consequences of same. That’s part of why I’m interested in it.

“It’s an intense moment right now. I’ve been thinking about this particular topic for years, about the way we construct the value of folklore and mythology, and the way early texts have frequently been grabbed up by agents trying to make their case for the allowability of violent othering. ‘Of course we’re allowed to call people monsters – we’ve always done it, it’s normal, it’s part of our human tradition.’ It’s basically what I always write about. It’s what Magonia‘s about. I mean, it’s what I want to change, so of course I want to write about it. We are once again, and I hope more successfully this time, having an uprising around some of those bullshit invented traditions. They’re not real. Beowulf is not a text about heroic whiteness – it is a text about wealth and privilege and comfort, and the ways in which wealth and privilege and comfort don’t neces­sarily equate to goodness. There are plenty of people in it who are wealthy and ruling, but aren’t good. There is also a dragon, and the dragon is a hoarder of gold and comfort, just like almost everyone else is. It’s an interesting, complicated text – way more complicated than I first thought. Working with it for The Mere Wife, I read tons of translations, everything I could find. I read all of the oldest translations, then read the 20th-century translations again, and went into the scholarship on the original text – which is how I ended up making a translation of my own.

“When I was nominated for a World Fantasy Award for 2016’s ‘Little Widow’, I read from The Mere Wife at the conference. I was talk­ing shit about how a lot of the translations had disempowered Grendel’s mother. The Mere Wife came from the idea that Grendel’s mother had been miscategorized as a monster, when in fact she’s actually just an ‘other‘ to some of the people who have power in the text; she’s not like them: she’s a warrior, and a single mother at the same time. I talked a lot of shit about all the male translators who’d translated her as a monster and added to her monstrosity. Seamus Heaney makes her a hideous troll hag-wife. A lot of translators – myself included – have feelings about what Beowulf is really about, and choose words to make the story they’re telling make sense. Some translators needed Grendel’s mother to be a definite monster. Nobody seemed to real­ize that Grendel’s father could be the monster. They were working off Biblical tradition, and it’s coming from that. In the text there are some words, things like ‘fingernails’ that get translated as ‘claws’ or ‘talons,’ because they already had in their minds that she’s a monster. She’s also carrying a knife, though. If you have long claws, why carry a knife? Grendel doesn’t use a knife – he uses his claws.

“Anyway, two of the World Fantasy jurors came to that reading, Betsy Mitchell and Eliza­beth Engstrom, and they raised their hands at the end and said, ‘So, when’s your translation com­ing out?’ I said, ‘No no no no, why would I do that? I’m totally not qualified.’ One of them said, ‘You sound as qualified as a lot of the men who translated it.’ I’d had in my mind that I needed to be a scholar, a PhD with maybe, you know, a Nobel prize, but I thought about it for a little while and thought, ‘Maybe I could do that.’ I was done writing The Mere Wife by this point, and was theoretically on my way to work on something else entirely, but I went to my agent, Stephanie Cabot, who said, ‘Go, do it.’ I had the idea to have ‘Bro’ be the first word, because the whole time I was working on The Mere Wife, I was thinking, ‘Oh, it’s a bro story – this is about men talking about their deeds, that guy they know, that badass – he’s so good, he’s so strong, he’s my friend.’ The tone of the poem is like that. I’d never seen a translation that framed it that way. I went to my editor, Sean McDonald at MCD/FSG and said, ‘What do you think, should I try to do this, would you buy it?’ He said yes. This is all to say that I had a supernaturally fortunate experience, where two women from our field said, ‘You should do it,’ and I actually got to do it. I don’t think it would have occurred to me any other way.

“The Mere Wife is so much my imagination, departing from the actual text of the poem. The Beowulf story’s in there, but the text is essentially my own poem – it’s like a book-length poem, and Grendel’s mother is the main character. It was strange having first written the novel, to go back to the original text and be faithful – because it is a faithful translation. I translated every line of the Old English. The first bits of Mere Wife I wrote in 2013, but I’d been thinking about writing it since 2006. I was at MacDowell and I read Revolutionary Road at the library, because somebody, a lit critic of note, who should prob­ably get some credit for me writing Mere Wife, said, ‘Oh, it’s a classic, you have to read it, it’s one of the great American novels.’ I did, and I was like, ‘But why? Why is this novel about the holy brokenness of suburbia so important to people?’ I didn’t get it. I’m not from civilization, not really. I’m from the wilds. This is what led me to want to write about Grendel and his mother. In The Mere Wife, as in the original poem, Grendel and his mother are ensconced in the wilderness. They don’t see civiliza­tion as holy. Nor do they see countertop problems and difficulties with faucets and proximity to the city as meaningful. I was interested in writing about coming in from the outside of the hall, because I’ve always come in from the outside of the hall – I like it out there. I mean, I like it and resist it, of course. I spent years in New York City – I had to dive into the hall and do some work in there.”

Read the full interview in the September 2020 issue of Locus. 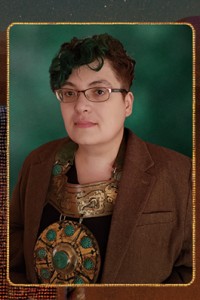