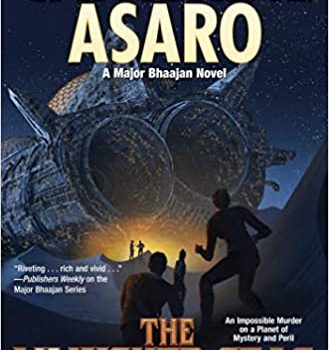 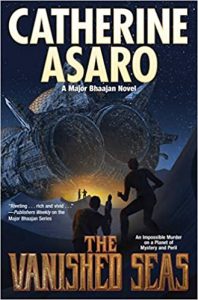 Catherine Asaro has been writing novels and shorter works set in her Skolian Empire since the publication of Primary Inversion in 1995. The latest is The Vanished Seas, third in a set of politically oriented mystery novels focussed on private investigator Bhaajan, a former major in the imperial military, whose history and connections with a local, much-maligned underclass has been the key to most of her in­vestigations. Though I’ve read most of Asaro’s Skolian novels, I’ve never quite managed to get my head around their chronology, or the multiplicity of family relationships (including different people who share the same names) that has been the core concern of most of those novels. Fortunately, the Major Bhaajan series is relatively self-contained and has a much more straightforward (and linear) timeline – and so far no aunts marrying their nephews or extreme age and power differences in relationships, which is not necessarily true for the other Skolian books.

The previous Major Bhaajan books, Un­dercity and The Bronze Skies, paralleled an investigation with Bhaajan’s involvement in changing the material conditions – and relation with legal authority – of the people from which she came, the residents of the undercity of the City of Cries, and her relationship with her sometime employers, House Majda, a very pow­erful aristocratic lineage, is sometimes made confrontational by her position as an outsider. In Undercity, the investigation involved a miss­ing person, a prince of House Majda; while in The Bronze Skies it involves missing persons, murder, and politics.

With The Vanished Seas, missing persons are again a major concern. A woman from the upper classes of the City of Cries disappears dur­ing a party attended by Majda representatives. Major Bhaajan is present, at Majda request, and becomes part of the investigation into the disap­pearance, which may or may not be murder, but which appears to have involved an explosion. The missing person was a senior business­woman, and her grieving husband is the main suspect. As the investigation proceeds, Bhaajan once again finds that most of her information and leads potentially involves the undercity, although, when yet another wealthy upper-class woman goes missing with her wife in the other room (also probably, though not certainly, in­volving an explosion), it seems like politics and conspiracies might have a part to play. The trail eventually leads to strange ancient technology, and individuals with poorly conceived plans for scientific and financial success. It also involves Bhaajan in a shoot-out in the desert – though that’s far from the first time Bhaajan’s been on the scene with several people trying to kill her.

Again, as with previous volumes, Bhaajan’s connection to the undercity and advocacy for its inhabitants is an important, even central part of the novel, with the divide between the haves and the have-nots and the cultural gulf highlighted. The science fictional racism and prejudice is somewhat awkwardly handled, and, unfortunately, this is far from the only awkward thing about The Vanished Seas. Asaro’s prose here suffers more than usual from abrupt shifts in register and second-order clichés, and from awkward dialogue: at best it’s uneven, and at worst it’s unexpectedly jarring. This small matter of style aside, Asaro’s long-running habit of loading up the exposition hammer and banging away is even more pronounced here than it has previously been, to a distractingly graceless extent.

If we lay aside these issues, The Vanished Seas is a reasonably entertaining sequel to The Bronze Skies and Undercity. But it doesn’t sat­isfy me, and I don’t imagine that I’ll expend very much effort in looking out for any subsequent instalments: when it comes to space opera or planetary romance, I’d much rather read Eliza­beth Bear or K.B. Wagers.