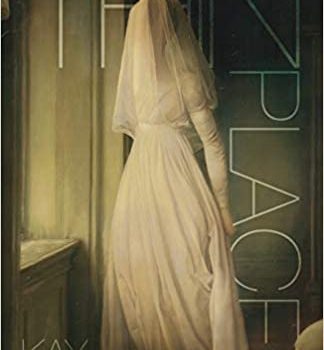 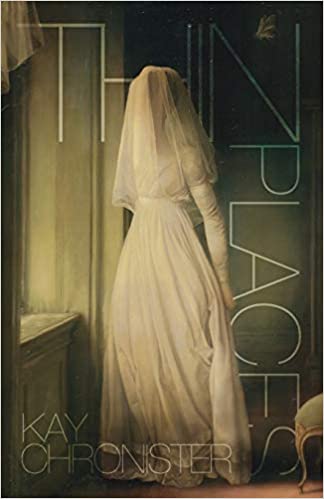 The final, eponymous story in Kay Chronister’s debut collection Thin Places explains what is meant – in this context anyway – by the phrase ”thin places”:

Thin places are parts of the world where the barrier between the clay and the mist is more fragile, where it can be broken…. Things happen in thin places that can’t happen anywhere else, but they are never safe from getting lost between clay and mist. They are always in-between.

Chronister’s 11 stories (three original) do, indeed, take place in thin places and these locales are both varied and uncanny.

The richly told but indescribable ”Your Clothes a Sepulcher, Your Body a Grave” takes place in a past of Italian gardens, an English country house and its crumbling gardens, near the Gothic spires of a cathedral and the boardwalk in Marseille at sunset. The narrator falls in love with the peculiar ”beautiful, bleak, and terrifying” Isabella when they are children and yearns to make her ”story come untrue.”

A failed composer wanders into Skelp, a rustic Slavic village in the imaginative ”The Women Who Sing for Sklep”. There a green ritual called Cemuk is accompanied by songs and music that make no sound. They appease strange shapes in woods and river. The composer and his assistant – in different ways – each find the women there have special powers.

”The Warriors, the Mothers, the Drowned” mixes Native American and Aztec/Mexican lore as Ana takes Sylvie, her baby daughter, across the river into the land of the dead. If she crosses it and comes out, the coyote/nagul that has been stalking her will have to let the child live. ”There are many meanings of the word dead,” Ana has realizes. ”Many intermediate stages between being and not being alive. She finds she can no longer name the stage where she subsists, nor the one where Sylvie has landed.” Ana learns a great deal, and the reader will too.

The narrator of the winning ”Too Lonely, Too Wild” didn’t inherit her Grammy’s witching power, but she can still see a ghostly woman and realizes being a wife is dangerous in the local countryside and town. She knows she must escape and fights to do so. It’s a darkly triumphal tale.

The Flamingo, a motel set in mysterious mangrove swamps and owned by Mother, is the setting for ”Roiling and Without Form”. Mother views everyone as either ”edible” or ”dangerous,” which gives you some idea this is a pretty creepy place. Forty-six-year-old Molly is the desk clerk/maid/minion. This world seems to be populated mostly by creatures just as bloodthirsty and weird as Mother. Unnerving. The narrator’s father in ”Life Cycles” gives him to the Glaire woman to pay a debt made to her 20 years before. The young man arrives at her home ”anxious like a bridegroom, like a first date, like a human sacrifice,” but the woman wants little to do with him. He learns that to court the Glaire woman is really to court her house. He also learns other truths about the woman, his father, the house, and himself. This is a story that ends, despite its disturbing nature, with a measure of hope.

In ”The Fifth Gable”, four women live in a four-gabled house. They have been considered frightening for decades. One day in September, Marigold Hest – a cleaned-faced young woman in a fashionable hat – walks past their house. In November, she knocks on the door. She wants the women to give her a child. Three of the women try, but what they produce are neither human or lasting. Still, Marigold feels the pain of a mother who has lost a child each time. She has suffered so much, she is allowed into the fifth gable. A story that starts out sinister but, again, offers a reason for optimism.

”White Throat Holler” is the best of the trio of new stories. Esther Grace is growing up in Pryor, a place where dead bodies don’t always stay buried and hunting demons is a girlish pastime: ”hours of hard work, sweat in your eyes and ticks on your clothes. At last, screaming exhilaration. They never went down without a fight. I crawled home at dawn with bloodstains on my nightgown.” But after her 13-year-old friend Emmalynn is murdered, Esther Grace’s preacher daddy announces that something unholier than usual has come to the town. Daddy brings the purewater man in to solve the murder. But Esther Grace and Martha, Emmalynn’s sister, know what killed the girl. Can they trust the purewater man with their knowledge? Should they?

Back in late 2018, when I first read ”Russula’s Wake”, I felt the premise had a shortcoming: how can Jane think that anything but isolation is necessary for her not-exactly-human children’s survival? That Jane – who has married into the world of the Paley family – loves her children is evident and, to me, her choice is obvious. But in retrospect perhaps I just got the gist of what is essentially a family story more rapidly than others might. The story’s conclusion, that Jane is ”their mother and she would take care of them,” was obvious to me – but then I’m a mother. ”The Lights We Carried Home” is set in a fictional Cambodian village, Psaodung, which is located near the real town of Siem Reap and the ruins of ancient Angkor Wat. It is also situated on ”the shore of the spirit-world.” The narrator, Dara, and her sister, Sopha, live there with their ming (aunt). The villagers are ”terrified of anything that pierced the darkness. But Sopha loved the ghosts who showed their faces for her and only her, and the spirit world was where she escaped when Psaodung became intolerable for her.” Thirteen years after the story begins, Sophia disappears, and a Western documentary film crew arrives. Dara is now 27. The foreigners want ”a domestic tragedy” but get a ghost story instead. More importantly, Dara learns new truths about Sopha’s disappearance. This story is probably my favorite of the collection. It is told more straightforwardly than most of the tales but is no less eerie for it.

Chronister ends the book with the aforementioned ”Thin Places”. The village teacher, Miss Augusta, has been warned not to accept Lilianne Eisner, the new lighthouse-keeper’s daughter, into Branaugh’s sole school. Eisner defies the odd coastal town’s dictate and enrolls the bright girl. The child recoils from the history, rituals, and customs of Branaugh that she is taught – as well she should. Stories of outsiders who find themselves in villages with arcane customs are not, of course, uncommon. Chronister tells this one weirdly and well.

All of Chronister’s thin places are worth visiting. 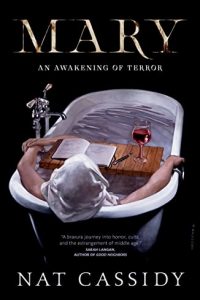 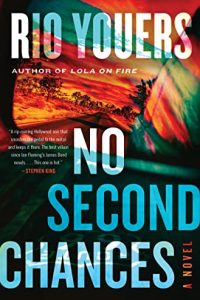