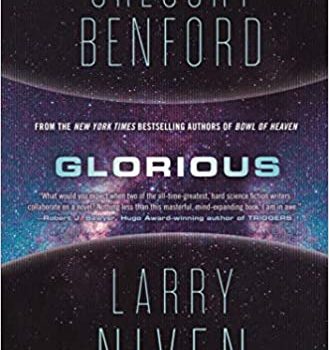 Gregory Benford & Larry Niven, Glorious (Tor 6/20) Two legends of hard SF reunite for the third (and possibly final) book in the Bowl of Heaven series, about humans on a colony ship contending with an immense extraterrestrial artifact – and dealing with some truly alien aliens.

Max Brooks, Devolution (Del Rey 6/20) Brooks is best known for World War Z: An Oral His­tory of the Zombie War, and now he’s turned his sharp wit, satirical eye, and gift for building a story out of multiple first-person accounts toward Bigfoot with this “Firsthand Account of the Rainier Sasquatch Massacre.” When Mt. Rainier erupts, the members of a high-tech utopian com­munity in the forest are cut off from civilization and become the target of displaced cryptids.

S.A. Chakraborty, The Empire of Gold (Harper Voyager 6/20) The third volume in her historical fantasy Daevabad trilogy provides a thrilling and satisfying finale as a con-artist woman and a djinn prince join forces to preserve a crumbling magical kingdom from devastation and civil war.

Ellen Datlow, Final Cuts: New Tales of Hol­lywood Horror and Other Spectacles (Anchor 6/20) The queen of the horror anthology turns her attention to film and television with 18 sto­ries by some of the marquee stars of the genre, including Kelley Armstrong, Laird Barron, Gemma Files, Stephen Graham Jones, Cassandra Khaw, Josh Malerman, and more.

David Gerrold, Hella (DAW 6/20) Gerrold’s lat­est SF novel follows the events of his Jumping off the Planet trilogy, chronicling the adventures of colonists on the planet Hella, where everything is immense – from mile-high trees to dinosaur herds to extreme storms. The book was origi­nally serialized on Gerrold’s Patreon.

John Hornor Jacobs, Murder Ballads and Other Horrific Tales (JournalStone 6/20) Jacobs (interviewed elsewhere in this issue) is one of the most ambitious new voices in horror, and this collection gathers ten stories of terror and crime, two of them brand new – includ­ing the title story, a sequel to his debut novel Southern Gods.

Patrick Ness, Burn (HarperTeen 6/20) In this bold YA fantasy set in a 1950s Cold War where dragons exist, an impoverished farmer hires a dragon to work his farm. He and his daughter are quickly entangled in a plot involving an assassin, a cult of dragon worshippers, and the FBI. It all comes together in a multi-layered, mind-bending explosion of genre delights.

H.G. Parry, A Declaration of the Rights of Ma­gicians (Redhook 6/20) From the author of the hit The Unlikely Escape of Uriah Heep comes a historical fantasy novel about 1700s France and Haiti, starring a necromancer Robespierre and weather mage Toussaint L’Ouverture. Fans of Jonathan Strange & Mr Norrell will be enchanted by this sprawling epic of revolution and dark magic.

Jerry Pournelle with David Weber & Phillip Pournelle, Mamelukes (Baen 6/20) The final novel by Jerry Pournelle. Fans have been waiting since 1987 for a fourth volume in the military SF Janissaries series about Rick Galloway – a CIA agent abducted by a UFO during a mission in Angola – and here it is! Pournelle posted three chapters online before his death, and the novel was edited and finished “with contributions by” his son Phillip and David Weber.