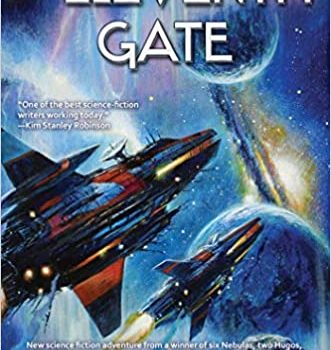 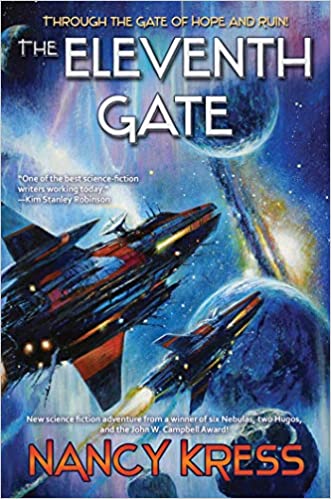 Ideological, familial, and generational tensions have figured prominently in Nancy Kress’s stories as far back as the Beggars sequence of the 1990s, and now in The Eleventh Gate they become major plot drivers. The new novel combines elements of space opera with quasi-dystopian political conflict and intrigue among a collection of extrasolar colonies. A century and a half earlier, the discovery of a set of mysterious interstellar gates allowed waves of emigrants to escape an Earth ravaged by ecological collapse and global war: ten gates, eight surprisingly habitable worlds, and three very different sets of refugee-settlers.

Now the Eight Worlds are occupied by their descendants, who have established dramatically different political-economic-cultural systems, each society stubbornly true to the ideology of its founders. New California and the other planets run by the Peregoy family are company-store worlds – corporate-paternalistic-authoritarian, with order and plenty assured by a ”benevolent dictatorship.” The two planets named, aptly, Rand and Galt, were settled by hardcore libertarians. There, despite a radical free-market/free-action philosophy, the Landry family’s Freedom Enterprises has become the dominant force. The nicest planet of the eight was claimed by an ”eccentric billionaire” who named it Polyglot and opened it to settlement by any and all, resulting in a pluralistic and rather fractious Old-Earth-style collection of independent city-states.

Despite their ideologically pure, clean-slate, new-beginnings ambitions (or delusions), none of these polities can entirely avoid the pathologies that an understanding of Earth history might mitigate – and it is clear that preferring ideology to history is one of the intellectual failings of both the Peregoy and Landry regimes. Nevertheless, these societies have gotten along mostly peacefully until the discovery of an eleventh gate sets off a land-rush rivalry that lurches into warfare. It’s a strange, pointless war – the planet on the far side of the new gate is uninhabitable, occupied by only a set of structures of non-human origin, but the pent-up hostilities and political ambitions of factions in both the Peregoy and Landry organizations have them stumbling into an increasingly deadly conflict, while more rational individuals on all sides struggle to head off disaster.

This political setup is a bit schematic, with its three domains/systems reminiscent of the old monoculture-society or comic-inferno model of 1950s SF magazines (and going back at least to Jonathan Swift and Gulliver’s Travels). Many of the cast members are to varying degrees straitjacketed by their political-philosophical notions or their psychological obsessions. The senior members of the Peregoy and Landry regimes are committed to their belief systems (while remaining practical and effective managers), but they have to deal not only with problems generated by the limitations of their absolutist philosophies in the face of intractable problems, but with grandchildren whose personalities, priorities, and ambitions diverge from those of earlier generations. The conflict is set off by an over-elaborate scheme initiated by Rachel Landry’s love-addled granddaughter Tara, while its escalation into potential holocaust-level destructiveness is pushed by granddaughter Jane, who discovers her inner warmonger. The Peregoy side has its own problems, including such a lack of suitable leadership stock among the younger generation that patriarch Sloan wishes that his favorite space-navy officer, Luis Martinez, could be enticed over to the management side of the business. In what at first seems to be a side plot, Philip Anderson, a Polyglot biologist seeking mystical experience, wangles his way into the story as he becomes convinced that the key to his quest for transcendence lies in the alien structures beyond the eleventh gate.

The story line advances in a series of reveals and intermediate resolutions – a familiar Kress pattern: solve one problem and another is generated, sometimes by the solution. It is a dance of privilege, duty, vision (both tunnel and grand), envy, ambition, fanaticism, mob psychology, and general folly. The four (or five, depending on how one counts) viewpoint characters and extensive supporting cast argue, conspire, maneuver, meditate, negotiate, worry, and shuttle among the Eight Worlds, engaging in weapons research and occasional space combat. It’s a shaggier tale than I expect from Kress, but what it lacks in plot-mechanical sleekness is made up for in its picture of believably benighted and beleaguered humanity, groping their way past reigning pieties and fixed notions about what constitutes a good social order and how far one ought to go to preserve the status quo. It’s not a pretty picture, and the resolution costs too dearly to be seen as optimistic.

While composing this column, I looked back two decades, to my reviews of the Beggars series, where I also noted a similar combination of traditional, even pulpy SF motifs and a nuanced and unsentimental presentation of human wrong-headedness – of the ways that problems resist complete, let alone painless solutions. The consolatory (or entertainment) side of our genre strains to find answers to the situations generated by the nightmare side. And I am writing this in the middle of an actual science-fictional plague-disaster story as messy and contradiction-filled as any designed by Nancy Kress (though not, I hope, as dire as one of John Barnes’s). You really can’t make this stuff up.