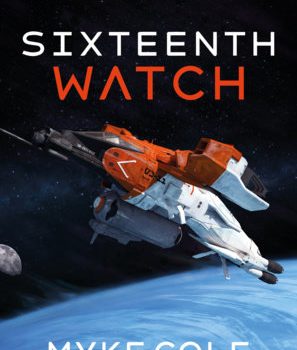 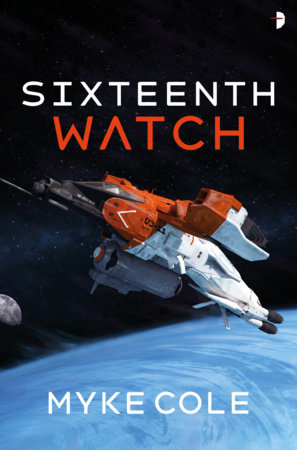 I have mixed feelings about Myke Cole’s Sixteenth Watch. Some of those mixed feelings are undoubtedly rooted in my ongoing ambivalence towards science fiction involving the American military and near-future ‘‘clash of the superpowers’’ stories that leave out the presence and actions of… well, everyone who isn’t a member of the military from one of the superpowers in question. Some of it, too, is my ambivalence towards futures that posit a United States of America that continues to be an outward-focused and vigorous dominant power, rather than a decaying imperialist dowager who bemoans the lost glory of her youth; just saying, empires have a trajectory. Some of it is my ambivalence about lunar helium-3 mining as a science fictional McGuffin: it brings comparisons to Ian McDonald’s Luna: New Moon and its sequels inevitably to mind.

On the gripping hand, though, I do love military science fiction, especially when it involves entirely fictional militaries: there’s something incredibly appealing about a small band of competent professionals led by other competent professionals doing a hard and dangerous job well. And Sixteenth Watch takes the US Coast Guard and brings it to space: an armed service whose mission is primarily about saving lives, not ending them.

Jane Oliver is a commander with more than 30 years’ experience in the USCG. She’s on her first rotation to the Moon for Search and Rescue, where her husband, naval commander Thomas, is also deployed, when tragedy strikes and the tensions between American and Chinese helium miners erupt in violence. A number of the first responders are killed – including Thomas and members of Jane’s own team.

A couple of years later, a still-grieving Jane is a captain teaching at the USCG academy when she’s offered an impossible job – and an opportunity she really can’t turn down. Elements of the US Navy are pushing to take over the Coast Guard’s customs enforcement and SAR duties on the Moon, and are also gung-ho about escalating jurisdictional disputes with China into a shooting war. If the Navy – a service whose mission is to win wars rather than save lives and enforce laws – becomes the service in charge of enforcement on the Moon, escalation to war is all but guaranteed, especially since the Navy have excellent public relations due to the development of military wargames as a televised sport: the Marine team has won the annual Boarding Games several years running.

Jane’s new, impossible job comes with a promotion to Rear Admiral and command of the Coast Guard station on the Moon – and with permission to retire on the Moon, near her daughter, where she’d never be able to afford to move on her own – but only if she can train the Coast Guard’s SAR team to beat the Marines in the Boarding Games. Her timeline is tight: there’s less than three months to the Games, and the SAR team is still dealing with the emotional fallout of having lost people when Jane’s husband died. (Grief takes time.)

With inter-service rivalry dangerously high, tensions rising across the border with the Chinese police and armed forces, and domestic politics weighted against the Coast Guard, Jane and her XO, Wen Ho, are stuck between a rock and a hard place. But when tensions come to a head, well. The rescue services’ motto is generally some variation on so others may live, after all.

Sixteenth Watch is well paced, with plenty of attention given to action and tension, if somewhat less to worldbuilding and character development: though Jane is an interesting character with compelling concerns, she may well be the only individual here to be treated with any depth at all, which is a little disappointing.

Sixteenth Watch is the second novel I’ve read this year to feature a Coast Guard or Coast-Guardlike organisation in space, and the second novel to feature a focus on a military inter-service competition (in both cases, Boarding Games) as a major part of its concerns – and so, when I was reading Sixteenth Watch, I found myself unable not to compare it to that contemporary, K.B. Wagers’ A Pale Light in the Black. A Pale Light in the Black did strongly develop its worldbuilding and its ensemble cast of characters, and offered a somewhat less superpower-centric vision of the future, while also delivering solid pacing and action. Its less narrow focus on purely military concerns allowed it space to develop thematic arguments, and to have the potential for a depth that Sixteenth Watch never acquires.

Sixteenth Watch is a decently enjoyable piece of military science fiction, competently executed and pleasingly novel in its focus on a life-saving branch of the armed forces. As an afternoon’s diversion, it’s good entertainment. It just won’t leave you with much to think about afterwards.