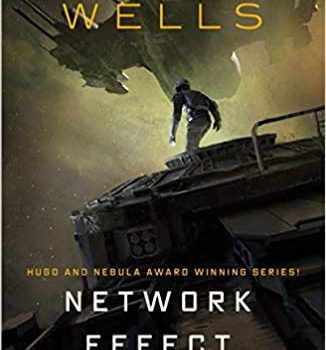 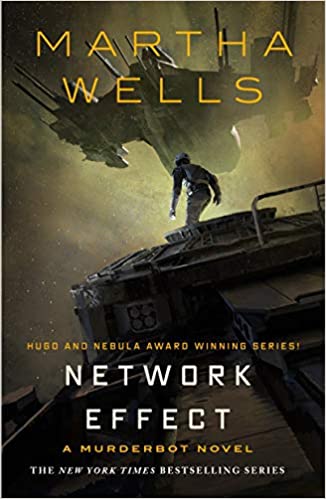 Martha Wells has been writing excellent books since 1993, when Tor Books published her The Element of Fire. The Element of Fire, in its revised 2006 version and Wells’s The Wheel of the Infinite (2000) would feature in a list of my 100 favourite books of all time, so it may be that when it comes to the very welcome flourishing of Wells’ career in the last decade, I’m biased.

I’m definitely biased when it comes to Murderbot stories: I can’t pretend I’m not predisposed to love them. And with the four novellas (All Systems Red, Artificial Condition, Rogue Protocol, and Exit Strategy) now joined by a full-length novel, Network Effect, there’s plenty of Murderbot to love.

Murderbot is a SecUnit: a constructed being, part organic (human), and part machine. For most of its existence, it was considered expendable property, and since it hacked its own governor module, in its polity of origin it’s considered extremely dangerous, malfunctioning property. Having finally left the brutal, capitalist, and mercilessly exploitative Corporation Rim for the relative safety of Preservation – a minor polity with a rather more humane approach to life in general than the Corporation Rim – it’s building a new life with its human associates. (Some of whom might actually qualify as ”Murderbot’s human friends” but things like friendship are stressful when you’ve got Murderbot’s level of psychological trauma.) Murderbot’s finally able to explore an existence where it doesn’t need to worry about being treated as an expendable object-slave or about being discovered as a rogue SecUnit and hunted down and destroyed!

It’s still figuring out how to handle having a human team.

It wouldn’t be a Murderbot story if a crisis didn’t intervene. It’s coming back from a trip with a Preservation Survey team – it’s the survey team’s security staff, and because this is Murderbot, its contract has a clause to specify no hugs – when the spaceship carrying the team is ambushed.

The team includes some of Murderbot’s original human friends, as well as Amena, the teenage daughter of Dr. Mensah (its original human team leader, and the first person for whom Murderbot felt an emotional attachment), and another of Dr. Mensah’s relatives. Murderbot tries to keep the squishy humans safe, and mostly succeeds. Unfortunately, it and Amena are captured by the raiders who ambushed their ship. These raiders casually admit to murdering ART (the Asshole Research Transport, AKA Perihelion), Murderbot’s first AI friend.

This makes Murderbot very angry. Among other feelings.

An angry Murderbot is a violent Murderbot. The raiders may also have killed or captured and removed ART’s crew, but the raiders don’t survive to answer questions.

These raiders look and act strange. They’re not normal, and they may have been modified in some fashion, either biologically or with implants. The ship arrives in the raiders’ home system with astonishing speed, revealing that it, too, has been modified in an unusual way. And it transpires that some other members of Murderbot’s team accidentally tagged along on the FTL journey, and now need protecting. There’s a lost colony. Dangerous space pirates. Corporate intrigue. Creepy abandoned stations. Stand-offs and maybe a shooting war. A terrible revelation: ART endangered Murderbot’s humans in order to try to protect its own.

Murderbot has feelings. And denies them, obviously, right up until the point where it can’t.

There are desperate actions, terrible secrets, and heroic feats of derring-do. Murderbot has to face some of its worst fears – its worst nightmares, if it had nightmares – and also face the fact that it not only cares about people, but that people care about it and will go to great lengths to preserve its existence.

Along the way, Wells reveals more about the Corporation Rim’s exploitative treatment of the people who live within its power, and of the ongoing attempts at resistance to the Corporation Rim and its inhumane ways. Murderbot is cynically inured to how bad it is, but Amena is coming face to face with the Rim’s reality for the first time, and her (horrified) reactions provide a contrast that throws the dystopian nature of the Rim into high relief.

As always, Wells is deftly skilled with her characters, showing us compelling people with very human needs and fears – even when some of them aren’t human. But she’s even defter with humour: perhaps my favourite part of Network effect happens after Murderbot ends up freeing another SecUnit from its governor module. That SecUnit is very confused that people are trying to reassure it, and we have some sections from its point of view.

These humans are not unknown. Amena and Ratthi were in HelpMe.file. This is a relief and an indication that I am in the right place. There is a protocol for meeting humans who are not clients but who are associated with clients, and that protocol will apply here.

Before I can speak, Ratthi waves and says, ‘‘Hello, hello. Perihelion says you’ve disabled your governor module. I’m Ratthi, and this is Amena. Please don’t be afraid, we won’t hurt you.’’

There is not a protocol for this.

And, as always, Wells has written some really great, tense action. This is a perfectly paced space opera adventure novel, one in which Murderbot continues to grow as a person. An enormously relatable person. The conclusion is deeply satisfying while also holding out the possibility of more Murderbot stories to come. I could read about Murderbot all week.

While I recommend Network Effect highly, and while I suspect that a reader could start here and still enjoy the story, this is a novel that will work best in the context of what has come before. For best results, start with All Systems Red, not here.

If you’re already on the Murderbot (AKA SecUnit) train, then you know what you are in for. Network Effect tosses SecUnit and its people into the Corporation Rim, where life is only measured in terms of ROI, after they are hijacked by kidnappers. SecUnit is reunited with the sentient spaceship Perihelion, whose people have also been kidnapped. There is a lost colony involved and some non-benevolent alien artifacts. Through it all, SecUnit remains snappy and relatable while navigating human emotions and, maybe, developing its own.

Network Effect is a fun read whose only downside is that the uninitiated – or, like me, those who missed one or two of the previous novellas – are going to be lost at times when the plot touches on Murderbot’s journey. Having some of the references not make sense, however, was a small price when Wells’s writing is this good. 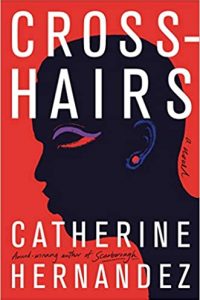 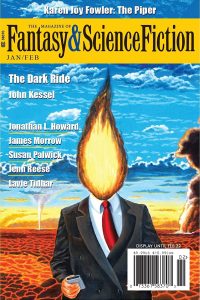 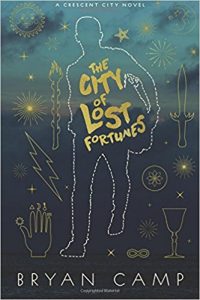