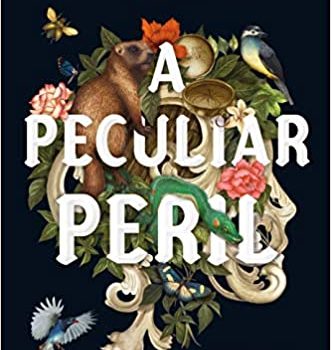 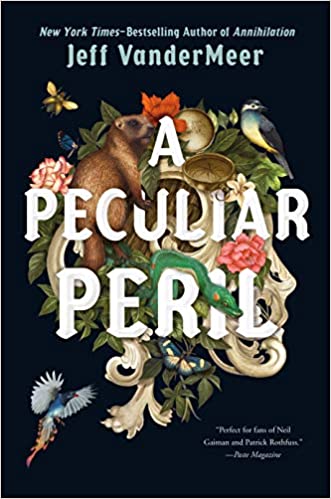 Jeff VanderMeer’s relationship with the Lambhead family goes back to 2003 when he and Mark Roberts co-edited The Thackery T. Lambshead Pocket Guide to Eccentric & Discredited Diseases, a compendium of weird and wonderful ailments, featuring well over 30 entries (and illustrations) from authors as diverse as Neil Gaiman, Jeffrey Ford, L. Timmel Duchamp, and Rachel Pollack. In 2011, the VanderMeers (Jeff & Anne) edited The Thackery T. Lambshead Cabinet of Curiosities. This time writers and illustrators, including everyone from Mike Mignola to Rachel Swirsky to Ted Chiang, explored the thousands of oddities, exhibits, and magical artifacts  collected  by  the  esteemed,  albeit  eccentric, Doctor Lambshead. Nine years later and VanderMeer has returned to the Lambshead-verse with A Peculiar Peril, the first novel in a planned Young Adult duology chronicling the adventures of  Thackery’s  grandson, 16-year-old Jonathan Lambshead.

The opening chapters of A Peculiar Peril – dense with information – not only introduce us to Jonathan but give us a taste of the weirdness to come. In short order, we learn that ”noted ‘man of medicine’ and erstwhile explorer” Thackery Lambshead is dead (apparently from a heart attack); that Jonathan is the only heir (his grandmother died in a car crash in the ’70s; his mother, Sarah, recently went missing in the Italian Alps); and that Jonathan can only take possession of the estate if he ”catalogue[s] all the items in [his] grandfather’s mansion.” Stepping foot into the house, Jonathan quickly concludes that even with the assistance of his two buddies – Rack (short for Dirk Wulf Rackham) and Rack’s sister Danny (short for Danielle) – it will take them a decade to inventory his grandfather’s cabinet, (more like warehouse) of curiosities. And yet, as directed by Thackery’s estate agent, the enigmatic Stimply J. Nightingale, who corresponds only by rotary phone, Jonathan comes in possession of the Wobble, a black bauble of great power and discovers, in ”a small, undistinguished room with a low ceiling,” three doors, one of which leads to an alternate Earth named Aurora.

Yes, A Peculiar Peril is a portal fantasy, but it’s a portal fantasy written by the same guy whose last novel, the incredible Dead Astronauts, featured a centuries-old leviathan and a messianic blue fox; whose book before that, Borne, involved a shapeshifting sentient blob and a three-story-high flying bear named Mord; and whose Southern Reach trilogy (Annihilation / Authority / Acceptance) did for fungus what Stephen King’s Cujo did for dogs. As such, Aurora isn’t your usual faux Christian or medieval secondary world, but rather a parallel Earth steeped in magic, talking animals, and strange ecologies. There are intelligent marmots who can detach their shadows, homicidal pigs and puffins (oh my God – the puffins!), and sentient vegetation, including a laugh-out-loud moment where a befuddled Jonathan encounters a carrot and potato holding hands and fleeing for their lives. And that’s not the half of it. The novel’s antagonist is everyone’s second favourite occultist (behind John Dee), Aleister Crowley. As the Emperor of the Franco-German Empire, Crowley has conquered a large portion of Aurora’s alt-Europe with the assistance of his familiar Wretch (”a melding of a rat, a cat, and a bat… that looked like none of those things”) and the snarky animated head of Napoleon (who spends his days perched on a dais). Beyond ruling Europe, Crowley’s primary objective is to find and capture the Golden Sphere, a ”Celestial Beast” with the ability to fulfill the Emperor’s megalomaniacal dreams of controlling the multiverse. Standing against Crowley and his bestiary of augmented animals – mecha-bears, crocodiles, and elephants, and the Burrower, ”a two hundred-foot-long dreadnought, wide and thick and glutted with millions upon millions of its namesake earthworms” – is the mysterious Order of the Third Door, which Jonathan has unwittingly become a member of.

VanderMeer’s vibrant worldbuilding and epic, parallel-reality spanning plot are supported by a cast of memorable characters. There’s brother and sister duo Rack and Danny, whose tight bond, complete with pet names and endless amounts of sniping and teasing, is threatened when a secret about one of the siblings is uncovered. There are the historical figures (Napoleon, Jules Verne, Franz Kafka) who are initially played for comedic effect but who each perform important roles in moving the story forward. Then there’s my favourite character, Ruth Less, whose punnish name belies her nightmarish, other-dimensional aspect. The novel’s best chapters are those told from her perspective as Ruth Less, deployed by Crowley as an assassin, becomes curious about the residents of Aurora (at one point adorably delighted at the prospect of joining a book club), while simultaneously slaughtering everything from people to bears to homicidal pigs. Compared to these spritely individuals, Jonathan does regularly fade into the background. However, several major revelations about his family toward the back end of the novel provide an intriguing set-up for the next book in the duology.

A Peculiar Peril does a terrific job broadening the scope of the Lambshead-Universe; and while it may lack the literary pyrotechnics of VanderMeer’s recent adult fiction, the novel pleasingly features his trademark sense of the weird, his fascination with bizarre environments and alien perspectives, and, of course, talking animals.