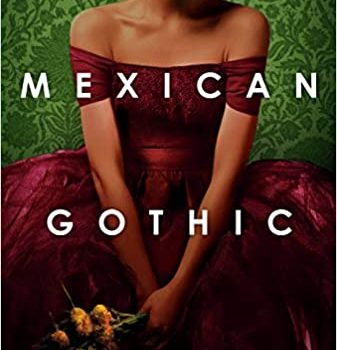 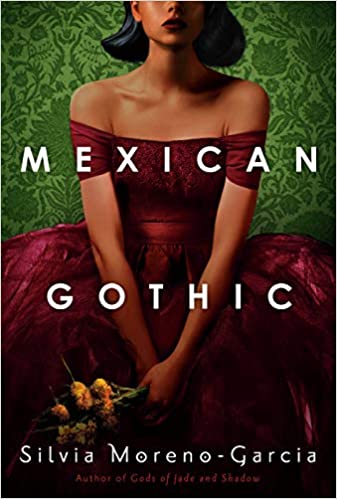 Noemí Taboada is a flighty but intelligent young socialite in 1950 Mexico City. Perhaps she’s growing out of her capriciousness, though. She seems focused on a career in anthropology and is determined to live up to family duty and her father’s trust. Her recently married cousin Catalina has written Noemí’s father a distressing letter stating her husband is poisoning her, ghosts and other evils beset her. She pleads for Noemí to come save her. Noemí journeys to the hinterlands of El Triunfo, a former mining town, to investigate. Our plucky heroine arrives at High Place, the moldering foreboding Doyle family mansion high in the foggy mountains. The Doyles, who once mined silver, have fallen on hard times, but that hasn’t affected their sense of superiority. The weird family Catalina has married into gets even weirder when Noemí meets its ancient patriarch, Howard Doyle, the father of Catalina’s handsome husband Virgil. Howard immediately launches into distasteful sentiments about eugenics. Virgil’s cousin, Florence, is in charge of the house and makes Daphne du Maurier’s sinister Mrs. Danvers look sweet and accommodating. Her son, meek Francis, is nothing like his sexy relative Virgil, but he is the only Doyle who is touched by Noemí’s considerable charms. Catalina does seem to be ailing from more than the diagnosed tuberculosis and may need psychiatric care. Her doctor (the family’s personal physician, Arthur Cummins), however, refuses to see that anything is mentally amiss. The plot thickens, bubbles, boils, and generally brews into a great (and subversive) gothic horror romp. Mexican Gothic has all the right ingredients: the romantic, fairytale-loving victim-bride; an uber-creepy cursed family with a malevolent mansion whose mysteries grow more bizarre by the page; isolated geography that obscures and ensnares; a cemetery of buried secrets; an unlikely hero; a village wise woman; foul fungi, and much more. Noemí is the perfect gothic heroine: beautiful, smart, and spunky but hardheaded enough to ignore all the signs to escape when she can. Like a Hitchcock heroine, she has a fabulous wardrobe and the ability to explore overgrown graveyards and navigate dusty village roads in high heels and full-skirted dresses to die for. The novel also offers a taste of Mexican history, folklore, and a glimpse of Mexico City elites circa 1950. A dark and delectable concoction readers can’t help but relish.

When it comes to cover art, Silvia Moreno-Garcia lucked out. Last year’s Gods of Jade and Shadow (now a Nebula Award nominee) features a striking illustration from Daniel Pelavin – a mix of art deco and Mayan influences – that beautifully blends the novel’s Jazz Age setting and mythology with our heroine’s wistful desire to see the world (spoilers: she gets that opportunity – and how!). The cover for her latest novel, Mexican Gothic, designed by Faceout Studio and Tim Green, has a similar eye-catching-I-want-to-read-this-now quality. With a saturated palette of red, green, and brown, it depicts a young woman of colour, dressed in a burgundy, off-the-shoulder ballgown, holding a dreary-looking posy of flowers. We can’t see her eyes, but there’s a pensiveness to her ruby red lips, to the way she holds the bouquet, that suggests there’s something not entirely right with the world. If the cover wasn’t already doing a terrific job at selling the mood, the title, Mexican Gothic, picked out in large white letters, boldly informs us of the novel’s setting and the genre sandpit Moreno-Garcia is playing in.

Mexican Gothic, like Gods of Jade and Shadow, has a historical bent, taking place in 1950s Mexico, a time of increasing prosperity for the country. This economic boom is reflected in the character of Noemi Taboada, the 22-year-old daughter of a wealthy industrialist. She is initially presented to us as a socialite enjoying the high life with a taste for Elizabeth Arden lipsticks, fine furs, and dashing men who resemble a ”younger Pedro Infante.” That first impression, though, is turned on its head when Noemi’s father offers his daughter the incredibly rare opportunity to enroll at National university so she can pursue a masters in anthropology. Sadly – at least for Noemi, less so the reader – the rest of the novel isn’t about her exciting adventures in higher education. Rather, Noemi’s enrolment at University is dependent on her immediately travelling to El Triunfo, an isolated village that doesn’t appear in any guidebook, to check on the mental well-being of her cousin, Catalina. It transpires that Catalina, recently married to Virgil Doyle, has sent Noemi’s father a letter making wild accusations about her husband, the Doyle family, and the High Place, which she describes as ”sick with rot, stink[ing] of decay, brim[ing] with every single evil and cruel sentiment.”

Moreno-Garcia shifts into full Gothic mode the moment Noemi reaches El Triunfo. The village is portrayed as having the ”musty air of a place that had withered away,” while the High Place, which looms over El Triunfo like a ”great, quiet gargoyle,” has a dilapidated quality with its ”broken shingles… dirty bay windows… slats missing from a couple of shutters” and mouldy interior. All that scene-setting is nothing compared to the rogues gallery that is the Family Doyle. We have hard-faced, rule obsessed Florence; icy cold Virgil; and the patriarch of the family, Howard Doyle, his ancient, pale features, the colour of a slug, ”gouged with wrinkles.” There’s also Florence’s son, Francis, but he’s less remarkable because he’s the one member of the Doyle clan who’s remotely human.

During that initial meeting with Howard, they get into an uncomfortable conversation about ”the intermingling of superior and inferior types.” I love this scene because it establishes – if it wasn’t already clear – that Noemi is the hero of this story; she brilliantly counters Howard’s less than subtle advancement of eugenics by referencing the work of Mexican anthropologist Manuel Gamio. It also cleverly sets up a conflict between Mexico’s nouveau riche, as represented by Noemi (whose self-made father turned ”a small chemical dye business into a fortune”), and the country’s colonial past as embodied by the Doyle family. Later in the novel, we learn that the Doyle’s wealth, now mostly exhausted, was made on the backs of Mexican miners who extracted silver from deep in the mountains that surround El Triunfo. When a plague swept through the mining camp, the Doyle family did little to assist, quarantining themselves in the High Place as the miners fell ill and died. This stripping the land of its wealth, this exploitation of the indigenous population, gives added depth to the story, but it also raises the stakes for Noemi. Not only must she free Catalina from the clutches of the Doyles, but she’s tasked with ridding the country of a colonial presence that has literally poisoned the land for decades.

One thing that’s clear about Mexican Gothic is that Moreno-Garcia is having a blast playing with the conventions of Gothic literature. The creepy family, the decaying setting, the gaslighting of women, and the twisted eroticism are all present, but in the last third of the novel, what was simmering comes to a ferocious boil with a memorable, albeit stomach-churning, climax that nearly put me off a certain food. What stops it from exceeding peak melodrama is the presence of Noemi. Her refusal to believe the lies the Doyles feed her about Catalina, her sense of justice when she learns the truth about this wretched family, and her capacity, as a well-educated and empowered woman, to stare down gloating, sleazy, white men, makes Mexican Gothic her novel. 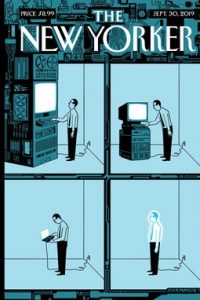 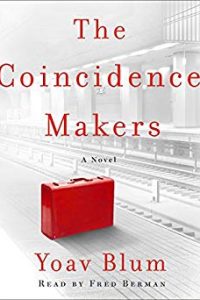