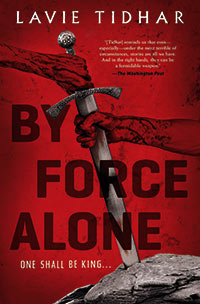 Sometimes while reading a Lavie Tidhar novel, there comes a point when you feel like he’s grabbed the wheel, grinning as he drives you aggressively into oncoming traffic and somehow pulls off moves that by all rights ought to be fatal. That’s never been more the case than in his dark and manic but thoroughly researched reinvention of Arthurian legends, By Force Alone – which, among many other things, first introduces us to Arthur as a teenage drug dealer in London and Lancelot as a kung fu master from the East, trained by none other than Joseph of Arimathea. Guinevere, for her part, runs a Birds of Prey-style girl gang, and Merlin is at once a half-human shapechanger (and occasional werewolf) and a rationalist who insists that magic is simply ”the understanding and manipulating of nature.” Secondary characters include most of the familiar names from Arthurian lore – Galahad, Kay, Nimue, Pellinore, Gawain, etc. – and surprise guest appearances by everyone from Grendel and his mom to the witches from Macbeth, and even a gaggle of leprechauns. Even that ancient Greek Antikythera mechanism shows up as a prop. As is increasingly the custom with K.J. Parker, Joe Abercrombie, and others, Tidhar has his characters speak in colorful contemporary vernacular (Merlin is told that the sword-in-the-stone business is ”the dumbest fucking thing I’ve ever heard”), much of it borrowed from gangster movies (”Don’t fucking move or your boy gets it,” ”It was the sort of offer you couldn’t refuse”), but even with nods to classic SF films (”Keep watching the skies,” ”attack ships on fire off the coast of Smyrna”) and, for good measure, T.S. Eliot.

Tidhar’s version of sixth-century Britain carries some oddly familiar overtones. They’ve suffered their own version of Brexit with the withdrawal of the Romans, infrastructure is collapsing, the economy in chaos, the government fragmented among competing kingdoms, and xenophobic fears of invading Angles, Saxons, and Jutes are rampant. The novel begins with the rise of Arthur’s father Uther, the birth of Arthur himself, and – significantly – the appearance of a comet, which Uther takes to be a dragon, thus naming himself Uther Pendragon. The fragments of the comet which fall to Earth will play an increasingly prominent role over the next several decades. We next meet Arthur as a young gang leader, running a hallucinatory drug called Goblin Fruit – actually kykeon, a kind of fungus-infected barley – and eventually deciding to unite the warring kings under his own leadership, which he accomplishes with all the efficient brutality of Michael Corleone taking on the Five Families (Arthur’s knights are even referred to as ”made men”). In traditional Arthurian episodic form, subsequent ”books” (there are fourteen in all, some quite short) relate the backstories of other major figures as they enter into Arthur’s circle. It’s not long before some distinctly SFnal elements begin to work their way into the mix, though. The fragments of that comet may be more than ordinary meteorites, and they may be radioactive (the Romans seem to have discovered radium), since those who work around them are somehow changed into mutatio, and there are rumors of old explosions so hot the sand was fused into glass. The mysterious, glowing zone around the impact, where Merlin’s powers are nullified, recalls nothing so much as the Strugatsky’s Roadside Picnic: reality may shift unexpectedly, and guides or ”crawlers” help visitors navigate the shifting and incomprehensible reality within: ”It’s like we’re ants, crawling on the hide of some massive beast,” explains Gawain, who is one such guide. Not surprisingly, these SF elements are woven into Tidhar’s versions of the grail quest and the wasteland.

If all this sounds like a wildly cavalier approach to the matter of Britain, with subtle and not-so-subtle allusions to contemporary politics and dialogue more suited to Samuel Jackson than to Tennyson, Tidhar makes it clear in an informed afterword that this has pretty much always been the case with Arthurian literature, from Geoffrey of Monmouth’s fabulations through the additions of Norman, French, and German writers, all the way down to Malory and eventually the Victorians (he stops short of mentioning Disney’s animated musical of T.H. White’s The Sword in the Stone, or other movie versions). In other words, By Force Alone – a phrase that recurs like a mantra throughout the narrative, reminding us that power is never really a matter of heritage or destiny – serves as a reminder that Arthur is a moveable feast, infinitely adaptable even to the era of Brexit and Trump. If Tidhar’s version seems pretty bleak, even as its endless inventiveness makes it undeniably exhilarating, that may simply be a reflection of where we all find ourselves these days. 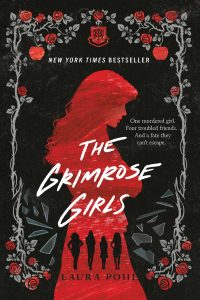 One thought on “Gary K. Wolfe Reviews By Force Alone by Lavie Tidhar”