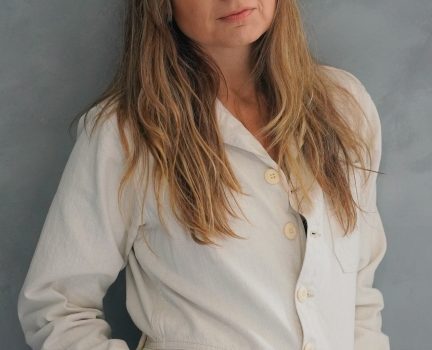 Writers are in a retelling frenzy, borrowing from what already exists to pay homage or lend perspective, to modernize or fracture or fanfic. I believe it’s an act of love to take a story that’s in danger of disappearing and make it new, provided you have something to add to the mix. But what happens when the inspiration for your current novel is and has only ever been a movie? What if the thing that has kept you up nights rippling with the excitement that only comes with the burgeoning of a new (and you’re quite sure) brilliant concept, turns out to just be what it is: a movie that was cool in the 80s because of its crushable characters, its successful capture of an era and, of course, the vampires?

I’ve adapted a book into a screenplay, and doing the inverse is more complicated than it seems. We need many more whys answered when we’re reading than we do when movie makers can drag out all the visual bells and whistles to distract us from what isn’t there. When reading, we need complete psychologies and backstories. More than that, we need the room for our stories to unfurl as they always do, unbridled; to give them the opportunity to be whatever they’re going to be, separate from whatever the original inspiration.

When I decided to write a feminist retelling of 80s cult classic horror movie The Lost Boys, called Mayhem, I was fully indulging my twelve-year-old self. I was so obsessed with that movie that I forced my mother to drop me off at the theater every day for a month. What else was a latchkey city child of the 80s to do? 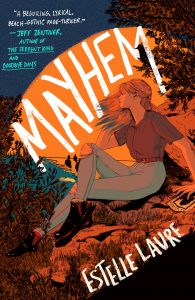 The Lost Boys is about brothers who move to a town in California and are drawn into a gang of kids who turn out to be vampires. The main love interest in the movie is given a raw deal (bless you, Jamie Gertz) and originally I thought it would be amazing to see what would happen if instead of all guys and one girl, we had all girls and one guy. I could put a feminist spin on it and capture the coolness and the complete summerness of the original at the same time.

The first step in taking on a project like this is to figure out what you’re going to keep and what has to go. Taking Mayhem as an example, I had to examine the magic and the world before I could even begin to write. While the industry is beginning to recover from the vampire exhaustion that followed Twilight, I knew unless I had a truly innovative take on vampires, I should leave well enough alone. So the magic would have to be different.

Also, in drawing out the plot of these brothers coming to this new town, one getting sucked into a vampire gang while the other sets out to save him, I realized it just wouldn’t translate into novel form. I tried. I wrote an entire draft trying to mimic the threads but with flipped genders. It was great in theory, but it was dead on the page. Too many characters, impossible to pull off from a single first person POV, no backstory, etc. Maybe someone else could do it, but it wasn’t working for me. I wasn’t happy. I gnashed my teeth, I threw myself, ate many snacks, and finally gave in and scrapped 90% of my original manuscript.

That’s when I decided to approach it in a different way. Instead of trying to imitate the original, I made decisions about what I wanted to keep, what absolutely had to be there.

So, for starters, sax man, a deeply oiled-up sax player who also sings and has one of those epic eighties sax solos, while also in spandex, while also gyrating, while also displaying his incredible long and curly hair. Keeper.

Next, the Frog Brothers. Originally played by Corys Haim and Feldman, these guys and their perfect comedy absolutely carried The Lost Boys. Wannabe vampire killers and conspiracy theorists, their scenes were my favorite. I tried flipping the genders, making them girls, and including them in my plot but it wasn’t working. So now I decided to make them smaller characters, still vampire killers, exactly as they appeared in the movie.

The setting and time period were the real no-brainers. I wanted Mayhem to be a dark summer book, the kind you could read on the beach, about the beach, that would also make you feel a little ooky about being there. It had to take place in the 80s because in order for the story to work, there had to be no technology. I also needed the ocean, the taco trucks, all the different colors and flavors, and mostly I needed the boardwalk; the rides and the carnival, the teenagers secretly running the town, the feeling of an endless, somewhat dangerous summer, and a town that was overrun with supernatural elements.

The rest of the movie peeled away more and more with each draft until I began to feel a little odd about even mentioning The Lost Boys; it slowly became more of a seed than the actual bloom.

What I love most about writing is the ways in which the story itself can surprise you. Although a reader could stand back and look at the story and see traces of The Lost Boys in its pages, what’s really been mined is a theme I didn’t even know was there at the outset, and that is the most crucial piece of the original intent that remains. It is this: Life is brutal and sometimes short, so you should be as powerful as you are and rage as much as you can, and you should do it while you’re young and the night is yours. Play hard and fall in love and obsess over your friends and choose your family, and if you happen to come across some magic powers, even if they aren’t totally ethically ideal, use them.

Ultimately, the story rules and always wins, and it didn’t want to be a “retelling” of anything. While I’m not the type of author to think of my characters as being independent, I have yet to end a story where I thought I would. Even when working from a preexisting source, as writers we have to allow for our own real life plot twists, for the magic. We have to trust that what sparked our obsession and devotion in the first place is what will remain.

Estelle Laure, the author of This Raging Light and But Then I Came Back believes in love, magic, and the power of facing hard truths. She has a BA in Theatre Arts and an MFA from Vermont College of Fine Arts in Writing for Children and Young Adults, and she lives in Taos, New Mexico, with her family. Her work is translated widely around the world..