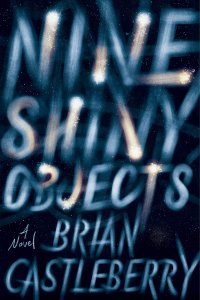 The Great Matter of UFOs, a topic which has intrigued the general public for over seventy years, has always resided at a strange tangential intersection with science fiction. Prior to the rash of strange aerial object sightings in 1947 that kickstarted what we know today as UFO-ology, science fiction of course had given us many stories of alien visitors or invaders coming to Earth. But each fictional instance was unique in its vision and artistry, and never held itself up as representative of real-world events. There was no canonical exegesis of what such sightings could possibly mean or represent, no unified mythology of Roswell and Greys and anal probing, and so on.

But after 1947, printed SF—or at least fringe elements of the field—began to incorporate UFOs into its more literary explorations. Editor Ray Palmer managed to work flying saucers into the infamous Shaver Mystery mythos. And of course when he created Fate magazine he tied that publication’s fortunes into the UFO phenomenon, even coming out with another magazine explicitly titled Flying Saucers.

Then of course the world got the cinematic flying saucer boom, from the sublime (The Day the Earth Stood Still) to the ridiculous (Earth vs. the Flying Saucers), followed even by UFO-inspired music: “Flyin’ Saucers Rock & Roll.” And so UFO-ology continued to be conflated for a time in the minds of those with little knowledge of or interest in prose SF.

But over subsequent decades, as UFO cultists became more extreme, conspiratorial and rococo, they lost interest in SF, and SF lost interest in them. The two fields diverged again—that is, until two Spielberg films, E.T. the Extra-Terrestrial and Close Encounters of the Third Kind, managed to make art out of Fortean paranoia.

But the subsequent interest in UFOs by genre SF writers has been minimal, as they ceded the theme to Whitley Strieber and others. Ian Watson gave us Miracle Visitors, Rudy Rucker ushered in Saucer Wisdom, and John Shirley tangled with the Greys in Silicon Embrace. Lastly, to loop back to the beginning, a few years ago Brian Stableford translated Jean De La Hire’s 1908 proto-UFO novel, The Fiery Wheel.

Now comes a debut novel from Brian Castleberry, the title of which refers to the famous description of the seminal sighting by Kenneth Arnold at Mount Rainier of inexplicable sky chariots. Although the novel never delivers actual aliens, and is set firmly in the past (1947-1987), it’s definitely part and parcel of this vast dialogue between UFO-ologists (and other fringe believers) and science fiction, in the same tangential, intersecting manner that Lucius Shepard’s A Handbook of American Prayer or Thomas Pynchon’s Inherent Vice is. (Shepard and Pynchon I see as tutelary deities for Castleberry, along perhaps with George Saunders and Jeff Ford.)

We open in 1947, with an aimless drifter named Oliver Danville. Happening to read about the “nine shiny objects,” he becomes enraptured and sets out on a Kerouackian road trip to visit the holy site. On the way he encounters some humble farmers named Saul and Martha Penrod, who have two young adult sons, Jack and Paul. Danville speaks of his vision, and of sister Eileen, who might also, he feels, resonate with the dawn of this new era. Saul and Martha become Danville’s first two converts, and the trio set out on the saucer pilgrimage, leaving Jack and Paul behind. These seemingly simple actions will now echo and exfoliate down the next four decades.

This introductory chapter sets the format for the rest of the book. We will be immersed up to the eyebrows in the mentality of a different viewpoint character each time, after jumping ahead five years. (And Castleberry proves very adept at altering each chapter’s style and pacing to reflect the different personalities. Moreover, his evocation of each era is excitingly vibrant and authentic.) Thus we receive many-faceted views of the fallout of Danville’s obsessions, until the crescendo and then the running out of the dream in diminuendo, moving from somewhat lofty ambitions to a sad and tawdry petering out, somewhat replicating that larger American narrative of the years 1947 (flying high on post-WWII victories) to 1987 (post-hippies, post-Watergate, controversial Ronald Reagan presidency).

The saga starts slow. Chapter 2 focuses on sister Eileen and a waitress named Claudette who falls in love with her (1952). The cult is moving ahead, but we don’t see its inner workings directly. In fact, in a deliberately chosen and briefly frustrating tactic, Castleberry never trots out Danville center stage again. The reader only witnesses him from a distance, through intermediary figures. But once we realize this tactic, we can revel in the gospel-as-revealed-through-the-disciples approach.

Next we are on Long Island in 1957, at the new development Eden Gardens, which has been taken over in its entirety by the cult. Two families, the Ranagans and Linwoods, play a pivotal part here. This chapter, the longest, is pretty much the height of the cult, since it explodes in a burst of violence and death.

Skip Michaels is our guide to 1967. An aspiring songwriter, he chucks his solid lower-middle-class life to hook up with one Max Felt, rock star, whose Manson-like lifestyle has ties to Danville. Alice Linwood (remember Eden Gardens) resurfaces as a conspiracy-minded shock jock for 1972. The 1977 chapter chronicles the decaying remnants of the Max Felt commune. In 1982, we get to inhabit the life of young Debbie Vasquez, Max Felt’s daughter, illustrating the extension (or blight?) of the quest in terms of a new generation. At this point we might feel that the long journey of the cult is ending not with a bang but with a whimper. However, Castleberry has an ace up his sleeve. The final chapter, 1987, trots out Paul and Jack Penrod. Remember the semi-abandoned farm kids from the first chapter? And we get a surprising and shocking revelation of a long history of dirty tricks and sabotage which turned Oliver Danville’s dream into a nightmare. Not to mention a poignant last look at Eileen.

While the overall narrative arc is fairly consistent and satisfying, with most threads tied up semi-neatly, Castleberry’s strength is in his linked-stories approach. Each chapter is very strong and rewarding considered as a self-contained unit. These characters pop off the page, with one composite character—America herself—emerging brilliantly from the gestalt.

Obviously taking inspiration from the real-life cults of the Raëlians and Heaven’s Gate, Castleberry has managed to lay down an extraterrestrial template over the “mundane” life of the country, teasing out the same archetypical beliefs that Jung uncovered in Flying Saucers: A Modern Myth of Things Seen in the Skies.