Note: This piece was written before the murder of George Floyd.

Hello. I’m back. After nineteen years—but who is counting and those years went by really fast—I’m returning to Locus to reach out to the science fiction community from New York City during a crisis. When I was traumatized during 9/11 because I was looking out of my apartment window at the Empire State Building expecting it to be hit by a plane immediately if not sooner, I phoned Pamela Sargent. She said that because my experience was important I should document it. Since Sargent is a very wise person I of course listened to her. I sent my remarks to Locus. My response to the terrorist attack appeared as “Report from New York City”. Well, here I go again. I wish to report from the New York City covid epicenter to explain how I view the crisis through a science fiction lens.

I was middle-aged in 2001. Hence, I am no spring chicken now. Securing a spring chicken is at the core of my covid survival quandary. Senior citizens in New York at once have to shelter within and acquire food. This duality defies logic. The quest to secure food is all that my New York friends talk about; we are obsessed. We inform each other about on-line food shopping venues which fail to deliver the food we want and the nutrients we need. Only science fiction can come to the rescue. Where is the food synthesizer on the Starship Enterprise when I need it?

Unable to beam up to the Enterprise, I did the next best thing. At the inception of the crisis, I read Manhattan Borough President’s Gail Brewer’s newsletter and, without thinking about it, I immediately called the direct contact number she provided. I did not expect her to answer. But she did! I couldn’t believe it. Here is the conversation:

M: “Please help senior citizens get food. Although I am sure that you do not talk to many science fiction scholars, please know that I am one. For seniors to at once stay home and get all their required food is a science fiction scenario, an impossibility. Yesterday the city sent food to schools and hardly anyone ate it. Please give it to the homebound senior citizens. It is hard for them to go into crowded grocery stores and to accumulate enough food.”

M: “Great. You’re wonderful! I love you! [articulated at the top of my lungs because it is legal to tell a public official that she is analogous to a superhero]. I can’t believe you personally answered my call. Bye.”

This happened several weeks ago. Because Walmart delivers only nonperishable food and Whole Foods said as much as “don’t call us we’ll call you”—and they never did—I still have not secured a spring chicken. I turned to receiving boxed meals from the city. Once upon a time, my awaited box arrived. I opened it. I was greeted by the following “meals”: plastic clamshells shells filled with chips, crackers, and cookies. A sole orange was buried beneath a box of Coco Puffs cereal. I have never eaten Coco Puffs. I do not intend to start now. I would rather starve than eat Coco Puffs. Like any bona fide New York woman, I complained immediately. I fired off a letter to the New York City food czar which explained that the city was paying to send senior citizens a gastronomical version of Pandora’s Box. I said that the box spewed forth food hell and the orange which remained within was the only nutritional hope. I turned from science fiction to mythology. Why? Because if I had chosen to inform the czar that I had a mouth and I must scream because of the garbage the city was sending me to place within it, she would not recognize my reference to Harlan Ellison.

Looking backward, I must say that spending one’s professional life reading apocalyptic novels is a very useful thing to have done if one is living at a contagion epicenter. I was riding the subway and teaching at a college in Manhattan during January, February, and early March. I knew that I was experiencing a science fiction text made real. I knew that I had to protect myself. I was the only person wearing a mask in the subway cars I entered. I hurt my finger in an attempt not to touch a subway pole. I washed my hands three times before and after teaching. When my hair got into my eyes while I was in front of my class, I used a pen to remove it without touching my face.

And lo it happened that Trump became a fantasy writer vis-à-vis the virus. “It’s going to disappear. One day, it’s like a miracle, it will disappear” (February 28, 2020), he said. During February, in contrast to Trump’s magic realism description, I called my friend and focused on reality. I said that I thought it was necessary to contain the virus via closing the New York area airports. This brilliant feminist who is not a science fiction scholar immediately dismissed my idea. She thought that it was outlandish to the point of being out of this world. So, knowing that listening to my solution was a job for another science fiction scholar, I phoned a fellow Science Fiction Research Association lifetime achievement in scholarship award winner, my longstanding friend Eric S. Rabkin. I first complained about the outrage Trump had committed that day before turning to the virus. This is Rabkin’s recollection of what he said to me: “I said (and I’ve said it to others, beginning just before Christmas) that a year from now (meaning then), the biggest story will turn out to have been the virus, not the election. Trump and the virus, sadly, go together. Indeed, one of the reasons the virus is as big as it is is that Trump’s narcissism and utter disregard for the lives of others has cost tens of thousands of Americans their lives, needlessly, to this virus, and that doubtless will have a huge influence on the election… assuming we have one. The virus will prove to be worse than Trump.” I was incredulous. Even with my science fiction expertise, I could not imagine that something could be worse than Trump. Rabkin was right. And although I did not have the power to close the airports and save the country, I believe that the safety precautions I took before the city shut down saved my life—and the lives of my family and friends. Science fiction scholarship endowed my colleague and me with prescient insight.

I am presently ending an on-line semester in which I saw my students appear pictured on a facsimile of the Enterprise bridge’s viewing screen while I sat at home in the captain’s chair. With the exception of taking out the garbage, I have not left my apartment since mid-March. In the manner of my fellow New Yorker Paul Manafort, I am under house arrest. But, unlike him, I am innocent—and I am free to leave my home. I choose not to do so because I am a chicken. When I am tempted to venture outside, I think of the possibility of being alone in a New York University Hospital intensive care unit bed while a doctor tells me that I will be placed in an induced coma before a tube is shoved down my throat. I think of all the sirens I incessantly hear emanating from ambulances bringing my fellow New Yorkers to hospitals. I think that my action could kill my husband. No walk is worth these potential consequences. But enough already. I am still living through this crisis. It is much easier to be flippant and equate “chicken” with food rather than fear. It is the tradition for New Yorkers who share my ethnicity to equate tragedy with humor. Springtime for my spring chicken?

As I write this piece, the New York Times’ front page article points a direct finger at the guilty party: “If the United States had begun imposing social distancing measures one week earlier than it did in March, about 36,000 fewer people would have died in the coronavirus outbreak…. Even small differences in timing would have prevented the worst exponential growth, which by April subsumed New York City (James Glanz and Campbell Robertson, “Waiting to Lock Down Cost 36,000 Lives, Estimate Says,” May 21, 2020). Unlike the guilty party, science fiction scholars and writers are better qualified to lead the country via thinking outside the box to combat a new situation. Stacey Abrams writes romance novels. Sounds good—for the future. In terms of present reality, though, the guilty party time waster in chief, like me, grew up in Queens. At least Queens also gave rise to a better leader, a leader who tells the truth: Andrew Cuomo. I am kissing the ground that Cuomo is my governor.

Despite the danger, I want to stay right here. Due to Cuomo’s leadership, the New York curve is flattening. When asked during one of his daily press briefings about people who might want to leave New York City, Cuomo replied, “Where ya gonna go?” Regardless of all the planets I am familiar with, I cannot imagine how to answer this question. I cannot imagine where else I would go. New York is my home. I love New York. I would not want to leave my city when it is down. I think that it will ultimately get better here. When I stick my head out of the window to get some fresh air, I notice that the air is clearer than it used to be. I hear unusually vibrant birdsong. No “when late the sweet birds sang” in New York City now.

I am a science fiction scholar and, of late, writer who is living in the middle of Manhattan within a science fiction contagion story. I don’t know when and how the story ends. But, to paraphrase the adult Wendy who explains that she has become too old to return to Neverland, I am ever so much older than I was during 9/11. But I am still me; I am still here. I know how what I am presently writing will end. It will end in the same manner as the first “Report from New York“: Oy!!!!!!!!!!!!!!!!!!! 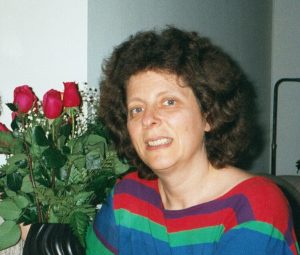 Marleen S. Barr is known for her pioneering work in feminist science fiction and teaches English at the City University of New York. She has won the Science Fiction Research Association Pilgrim Award for lifetime achievement in science fiction criticism. Barr is the author of Alien to Femininity: Speculative Fiction and Feminist Theory, Lost in Space: Probing Feminist Science Fiction and Beyond, Feminist Fabulation: Space/Postmodern Fiction, and Genre Fission: A New Discourse Practice for Cultural Studies. Barr has edited many anthologies and co-edited the science fiction issue of PMLA. She has published the novels Oy Pioneer! and Oy Feminist Planets: A Fake Memoir. Her When Trump Changed: The Feminist Science Fiction Justice League Quashes the Orange Outrage Pussy Grabber is the first single-authored Trump short story collection.