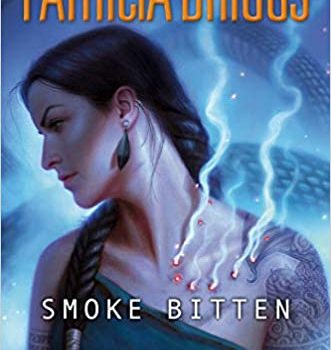 Welcome to the coronavirus version of our Bestsellers list. The numbers reported reflect any sales made before lockdown and any online, mail, or curbside pick-up orders since.

On the hardcover list, two new releases, both from long-running and well-loved series, claimed first and second place. Smoke Bitten by Patricia Briggs, book 12 in the Mercy Thompson series, barely edged out the eighth book in the Rivers of London series, False Value by Ben Aaronovitch, to nab the top spot. There were no new runners-up. We had 36 nominated titles, down from last month’s 47.

On the paperbacks list, book nine in Seanan McGuire’s InCryptid series, Imaginary Numbers, owned first place with almost twice as many votes as our second place finisher Blood of Elves by Andrzej Sapkowski, the first book in The Witcher series. Our new runner-up was the third book in The Books of Raksura series, The Siren Depths by Martha Wells (Tor). There were 44 titles nominated, down from 54 last month.

N.K. Jemisin’s The Fifth Season (the first book in her Hugo Award-winning The Broken Earth trilogy) returned to the top of the trade paperback list, followed closely by the fourth book in The Witcher series, Sword of Destiny by Andrzej Sapkowski. There were no new runners-up. We had 49 titles nominated, one up from 48 last month.

Only one book received enough votes to earn a spot on our media and gaming related books list, Star Trek: Picard: The Last Best Hope by Una McCormack. There were no new runners-up. We had 11 nominated titles, down from last month’s 16.

Clarion South is looking for donations from the SF community to help refill the coffers that were wiped out this year. The 2009 workshop faced “a few challenges,” including the last-minute cancellation by Griffith University of their original venue and three of the tutors dropping out. The venue change cost more than Clarion South had budgeted for, and though they were able to meet the various challenges, it broke the