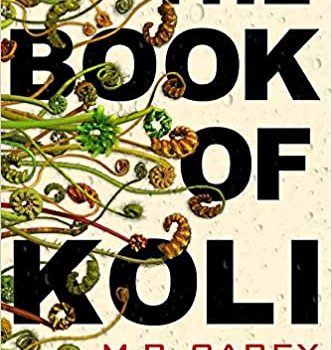 The Book of Koli doesn’t read much like the initial book of a genre trilogy. It’s quiet, deeply humanistic, and full of lush characterization and worldbuilding, rather than action or adventure. But what a glorious beginning it is. M.R. Carey hefts astonishing story­telling power with plainspoken language, heartbreak­ing choices, and sincerity like an arrow to the heart. Koli is one of the best books I expect to read this year.

Remember M. Night Shyamalan’s The Village? How long that movie took to establish its setting and the pattern of life within it? How much effort was expended on character development? Remember sitting there in discomfort, knowing something was seriously wrong under the scrim of the story? That’s what The Book of Koli feels like. The first two-thirds of the novel are essentially pastoral, unfold­ing a tale about what a boy will do to win love and importance in a post-apocalyptic village in England. In this world, trees and plants are dangerous killers, genetically modified animals and insects are major threats, and human beings rely on each other and a few remaining pieces of “tech” from the old world, before an unspecified catastrophe wiped out life as we know it in 2020. This tech encompasses danger­ous weapons, fancified iPods, drones still bristling with artillery, long-obsolete guard station AI, and a walking medical unit that can do basically whatever its owner needs from it.

Our narrator, Koli, speaks in a lilting country dialect, which could read as charming or grating depending on one’s tolerance for such mechanics: “I say they was the same, but that’s a loose speaking.” “It seemed like I hadn’t got any choosing.” “I might of done it, all the same, if something else hadn’t of happened instead.” He has the habit of bringing forth remarkable wisdom in adages that are new, but don’t feel that way: “For a young boy trying to get across to being a man, everything is tied up with his pride and his pizzle in ways that make the whole job a lot more difficult.” “Standing still is a human thing, like a defiance we throw, but we can never do it for long.” None of this feels forced or amateurish; instead, it’s the work of a storyteller at the top of his game. The ease and sorrow with which Koli’s story unspools took my breath away. It’s a real story, a profoundly human story.

Via Joseph Campbell, it’s pretty easy to guess the arc M.R. Carey is drawing, and to predict where he’s going with all this: Koli will leave his little village, strike into the big world, and learn what kind of catastrophe nearly destroyed the human race. Along the way, he is likely to meet large evils and alter the course of the village life he leaves behind. However, almost none of that happens in the 400 pages of this first installment in the Rampart Trilogy. Koli does leave the village (over halfway through!), and the reader gets little hints of the big world he’s gradually entering, but the conflicts remain local and character-driven through nearly all of the book.

Thus, to some readers, it might seem as if very little happens in The Book of Koli – as if it’s the preface that the author should have cut before publication. Based on the shape of this first book and the way Orbit is releasing its sequels (all three within 10 months), I’d wager that the Rampart Trilogy is less a trilogy than a single massive book, cut into three slices to make it publishable, and that means I’m reviewing only the first third of it. By that rubric, Carey is less wasting our time than taking his time, establishing the world and the characters carefully, so their triumphs and losses cut that much deeper into the reader’s heart when they occur. Few genre writers since the Victorians have bothered with that kind of effort, instead throwing in development while they push the plot along. Carey’s rare choice will reap marvelous rewards.

“It never stops amazing me how a story can deliver you out of your own self, even in the worst of times,” Koli tells us. Same here. Koli’s story transported me entirely, lifting me into a hammock of its own strong fabric, even while keeping me grounded in funda­mental human concerns. I did not want this book to be over, and even September, when The Trials of Koli releases, feels like too long to wait for the next part of Koli’s tale.