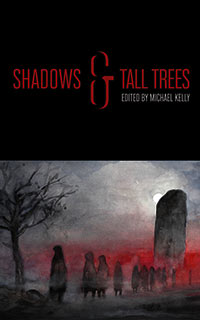 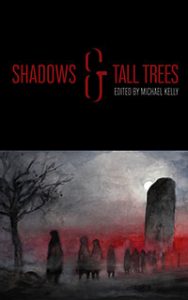 Shadows & Tall Trees, Vol. 8 lives up to the high standard previously set by editor Mi­chael Kelly with this series. The anthology’s 18 original stories serve as a good entry drug to the best in modern short fiction as well as reliable reads for those already addicted. Many tend toward the surreal. The only variable lies in the reader’s personal emotional reaction to any individual story – some worked better for me than others – but Shadows & Tall Trees, Vol. 8 is as notable as ever.

The anthology leads off with “The Glassy, Burn­ing Floor of Hell” by Brian Evenson – a woman loses part of herself after spending the night in a strange room – eventually surreally effective and, as always with Evenson, beautifully written. The reader, however, has to accept the premise that an intelligent women would drive to an event she does not want to attend, arrive there to find it located at a creepy deserted lodge in an isolated spot with no cell phone coverage, proceed alone to an even creepier room with no electricity, and tuck in to spend the night when she could more easily have got back in her car and left.

The narrator of Kay Chronister’s “Too Lonely, Too Wild” didn’t inherit her Grammy’s witching power, but she can still see a ghostly woman and realize she needs to escape a town where wives are invariably less than fulfilled. A folkish and haunting tale.

In the rhythmically driven “Tattletale” by Carly Holmes, children torture a “tattletale” – a poverty-stricken, disabled girl – who ultimately more than holds her own.

Simon Strantzas satisfies with the surrealistic “The Somnambulists”. Seymour, a balding, bland bureaucrat, arrives at the Hotel Russo for an inspection. Erected “so swiftly it was a blur” without permits or builders, something “about the place made his whole body tense. Some sense of familiarity he couldn’t put into words.” An unsettling story.

Touching, quiet, terrifying on several levels, “The Sound of the Sea, too Close” by James Everington is also both unsettling and surreal, but starts out more grounded in reality. Elderly Jack is responsible for the care of an abandoned school in a nearly deserted seaside village. The school attracts adults who act like children, “feverish as the planet’s terrible summers.” He has no idea why or how they come. “No one ever came looking for them, no reports ever came from the villages inland of their arrival.” Everington reveals the failures of the planet, society, and Jack’s personal life as he deals with the “kids” – some as old as he – who inexplicably arrive. One of my favorite entries.

Allison Littlewood’s “Hungry Ghosts” is deliciously spooky and richly atmospheric. Mai, visiting a friend in Hanoi, discovers the dangers of the festival to honor the “hungry ghosts.”

Samantha, sick of her husband and children, goes “on a search… for the place where she will be happy” in “A Coastal Quest” by Charles Wilkin­son. She arrives at a coastal island town she knows from a book by an author who found serenity in a cottage there. The story is something of a bait-and-switch, but it is well told enough to keep you reading.

KL Pereira’s “You, Girls Without Hands” is a highly original revenge story: “Fathers who are not fathers, and daugh­ters who are cut, tell different stories.”

“The Quiet Forms of Belonging” by Kristi DeMeester is a dreamy tale of two sisters dwelling in a transmutable house once controlled by their father: “Doors that opened on darkness or a verdant green so lush it made my mouth water. Floors gone so soft our feet sunk, our muscles aching from the effort to pull them out.” Dad’s gone and the house now does the will of sister Helene. Or does it?

Hourly employees of Corvidan Incorporated are invited/commanded to attend a lavish holiday party. Warnings not to attend, if you value your life, appear. Stories of strange historical massacres, then more recent incidents, with coins stamped “QO” as a clue circulate. Told in epistolary form, “Workday” by Kurt Fawver is clever but somewhat lightweight.

“Camera Obscura” by C.M. Muller is a story told many times before: a doomed protagonist obsessed with a deadly spectral beauty. This time it’s based on the “Norse figure of the huldra, that tail-bearing deity of the forest known for duping men with her beauty, first seducing and then luring them to her mountain home.” Again, despite familiarity, the story – especially the setting – is well done.

I don’t think I ever met an M. Rickert story I didn’t like, and “The Fascist Has a Party” is no exception. It’s a warning fable of a leader who blames fake news and “the other party” for anything contrary to his “dreams of making their county what it had once been, or maybe never had been, but would become again; a place where bodies hung in the shadows of his great light, and the children weren’t missing.”

In “Child of Shower and Gleam”, Lynn is a poverty-stricken single-mom-to-be, preparing for her daughter’s birth. After establishing a relation­ship between her and Nissa, a strange little girl, Rebecca Campbell does an excellent job of build­ing tension and fear. Lynn feels threatened by a man from her past while providing uplifting magic.

“Sleepwalking with Angels” is a moving story about the horror of aging by the ever-reliable and prolific Steve Rasnic Tem: “You are now old enough to understand there is a line which can be crossed, a balance which can be upended. You should not be here, and yet there seems to be no good solution for it. Everything you have done up until now has been improvised.” What more needs to be said to recommend this one?

In “Green Grows the Grief” by Steve Toase, Sophie scatters her dad’s ashes in a derelict es­tate greenhouse where the father had once been an apprentice gardener; her brother Simon, who had not been as involved in his care, is simply present. Later in the summer, Sophie returns and takes seeds and seedlings home and starts growing them. Ghosts come with the sprouts. She becomes increasingly isolated. This is another story that does a bang-up job of slithering into the surreal.

V.H. Leslie’s “Lacunae” composer Malcolm returns to the Scottish island where, 30 years be­fore, he wrote his greatest work. Accompanied by his second wife and young daughter, he intends to compose his magnum opus. Leslie deftly combines a #MeToo theme with artistic struggle, realizations about the past, and the magic of music in this unique story. Another personal favorite.

Successful Dan returns to Crawfoot, the village of his youth, in “Down to the Roots” by Neil Williamson. He literally recalls little of the place, but memories – especially dark ones of local Halloween customs – start to return. Halloween-based stories are numerous and can be mundane, but Williamson’s use of uncommon traditions and an Australian setting make this one memorable.

The anthology concludes with “Dollface” by Seán Padraic Birnie. Unpleasant neighbor Ray­mond is convinced a doll given to his daughter has brought trouble. He asks the narrator to help him destroy it. This proves to be a challenge. Like some of the other stories herein, Birnie takes a familiar theme and successfully reimagines it. 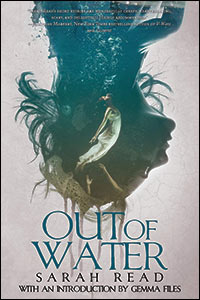 With the exception of Black Static and a reprint in The Best Horror of the Year, Sarah Read has been published mostly in minor-league anthologies and periodicals over the last five years. I missed her debut collection when it came out from Trepidatio last November, but it deserves to be noticed. True to its title, several of the strongest stories are linked to water. “The Eyes of Salton Sea” features a dead and deadly sea, a shipwreck and its treasure, human frailty, and a curse. In dark fairy tale “Tall Grass, Shallow Water”, an underwater monster uses a girl as bait for mothers destined to become her “meat.” “Underwater Thing”, original to the volume, fea­tures a monstrous man meeting the revenge of his victim from a watery grave. Not all of the 18 tales are aquatic, of course. “Endoskeletal”, one of the best of the anhydrous, combines archeology and monsters. “Magnifying Glass” is a creepy modern haunted house story that builds to a horrific finish. Science meets myth in “Crosswind”, another of the originals, when a storm-chaser-turned-caster captures a tempest. As a first collection, Out of Water might have benefitted from a few more years of stories to choose from, but it is still a solid demonstration that Read thrives in the darkness and writes with skill.