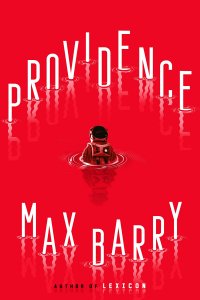 Max Barry, Providence (Putnam 3/20) Barry min­gles classic SF ideas, touches of satire, and deeply drawn characters in this entertaining SF thriller of war with aliens, a four-man mission sent to fight them, and the realization that their ship – and the people who sent them – are unreliable.

N.K. Jemisin, The City We Became (Orbit US 3/20) The soul of the city is made real in this Love­craftian fantasy novel set in present-day New York City, where multiple avatars of the metropolis deal with some tentacled invaders. “As the inaugural volume of what promises to be a wildly original fantasy trilogy, quite unlike anything else Jemisin has written, it completely takes command of the very notion of urban fantasy.” [Gary K. Wolfe]

Alma Katsu, The Deep (Putnam 3/20) Katsu does for the Titanic what she did for the Donner party, bringing a dark supernatural twist to history in this gripping tale of the ship’s doomed first voyage, and one survivor’s efforts to deal with resurging terrors four years later, in the middle of war.

James Patrick Kelly, King of the Dogs, Queen of the Cats (Subterranean 1/20) Kelly’s new far-future novella involves galactic politics and a mysterious circus with cloned humans and uplifted dog and cats. “Kelly packs a good deal of insight­ful political and social commentary into this brief but entertaining fable…. It’s a shrewdly comic tale with more of a bite than we might at first suspect.” [Gary K. Wolfe]

A.K. Larkwood, The Unspoken Name (Tor 3/20) A first novel getting good buzz, this first book in the Serpent Gates series provides some wild and entertaining twists on epic fantasy tropes as well as spectacular worldbuilding, as it follows an orc priestess who becomes an assassin for a wizard.

Tim Powers, Forced Perspectives (Baen 3/20) Powers whips up a delirious tribute to LA’s weird side in this action-filled fantasy novel, sequel to Alternate Routes. Former agents Vickery and Castine are pursued by a cult whose leader believes their afterworld experience and ability to see other times make them essential components for an all-encompassing world god/hive mind.

Matt Ruff, 88 Names (Harper 3/20) Ruff’s trade­mark wit and a love for roleplaying games pervade this near-future SF cyberthriller/romantic comedy novel about a paid guide showing the pseudonymous Mr. Jones (possibly Kim Jong-un) the world of virtual-reality gaming. “I do not share Matt Ruff’s enthusiasm for roleplaying games… It’s therefore a credit to [his] strengths as a story-teller that I was utterly engrossed in his depiction of a virtual world of epic quests, galactic-spanning space battles, and incredibly violent bank heists.” [Ian Mond]

Ann VanderMeer, ed. Avatars Inc (XPRIZE 3/20) Acclaimed editor VanderMeer and the XPRIZE organization have put together this free anthology, available at <www.avatars.inc>, of 24 all-new stories set in the 21st century, about people using robotic avatars to experience things from a distance. Despite certain similarities born of the premise, the stories display an impressive inventiveness, coming from a range of skilled talents including Pat Cadigan, Jeffrey Ford, Ken Liu, Paul McAuley, and Johanna Sinisalo.

Nghi Vo, The Empress of Salt and Fortune (Tor.com Publishing 3/20) Intrigue, betrayals, ghosts, and romance spice up this striking feminist fantasy novella set in a land inspired by Chinese lore, as a handmaid tells the unexpected true story of the recently deceased empress. 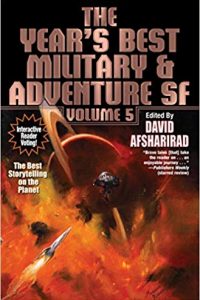