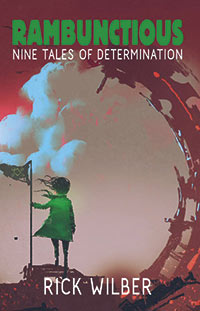 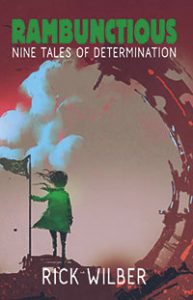 There are a few things we can reliably expect in a collection of stories from Rick Wilber (whose Alien Morning was a finalist for the Campbell Award a couple of years ago, but whose only previous collection was 1999’s Where Garagiola Waits and Other Baseball Stories). Two of these are pretty common SF preoccupations – alternate history and alien contact – but two are far more personal, and lend Wilber’s voice a kind of author­ity and compassion that have helped him carve out a niche identifiably his own. These are sports (usually but not always baseball) and parenthood, particularly the challenges presented by a child with Down syndrome or an aging and diminishing parent. Both topics are too sparsely addressed in speculative fiction, and both are prominent in two of the most moving tales in Wilber’s Rambunc­tious: Nine Tales of Determination. The lead story, “Today is Today”, is essentially a what-might-have been meditation on the possible lives or “bubbles” of a second-string football player and coach and his Down syndrome daughter, converg­ing on a sad scenario in which she is moved to a group home because the narrator, now suffering from encephalopathy because of his football career, can no longer look after her. The story’s main message, though, might well serve as an epigraph for most of the stories here: “We’re in this bubble, the one we share, the one where we do the best we can with what we have.” The most accomplished and heartbreaking family portrait in the collection is “Prices”, whose narrator – who never quite made it in sports – must deal not only with a Down syndrome child but with a mother suffering from Alzheimer’s and an aging father whose deteriorating memory focuses increasingly on the one high point of his otherwise mediocre major-league baseball career, when he pitched a perfect game decades earlier. In “Walking to Boston”, it’s an aging spouse whose faculties have begun to fail, and who confuses her life in a nursing home with meeting her husband decades earlier in 1940 Ireland, where he was a downed American flier and she was coping with her own grandmother’s dementia. When the husband picks her up for an outing, it turns into a long-delayed honeymoon journey, as the two of them seem to literally drive back into 1947. Wilber’s skillful juggling of time frames lends the tale the flavor of a classic timeslip romance.

Even the collection’s one ghost story, “Hope is an Element of Cold, Dark Matter”, centers on a high school student trying to reconnect with her estranged father, a Scots astronomer, on a study trip abroad. Haunted by the memory of her best friend’s suicide (and occasional ghostly presence), Annie is also puzzled by why her dad, whose re­search into dark matter has gained him a measure of fame, should suddenly want to re-enter her life. While the resolutions of both problems dovetail a bit too conveniently, the characters are as vivid as Wilber’s portrayal of contemporary Edinburgh and the hill known as Arthur’s Seat. The one straight-up thriller, which verges on horror, “Ice Covers the Hole”, deals with a young woman coming to terms with her father’s much darker past and her own repressed memories. Wilber is skilled at draw­ing smart, alienated, sometimes truculent young women, and one of them gives the story “Ram­bunctious” its oddly old-fashioned title, though, to be fair, that term come from the girl’s grandmother, who rather oddly insists that the girl’s superior intelligence has to do with the secretive family’s alien origins. In a subtle nod to alien abduction lore (and perhaps a bit of prefiguring), the girl is a student at Barney Hill Elementary School.

The remaining stories offer a taste of two of Wilber’s ongoing series. “Something Real” is one of his alternate-history tales involving Moe Berg, the brilliant real-life major league catcher who also served as a World War II spy; in this one, he is assigned to attend a conference where he must decide whether to assassinate Heisenberg in order to prevent or delay Nazi nuclear weapons develop­ment. It’s cleverly worked out, with initially subtle clues as to the alternate timeline (Fermi is still in Italy in 1944, for example), and its title reflects again the recurring theme of a mediocre athlete (despite many seasons in the majors, Berg was never much of a ball player) finding “something real” to do with his life. Both “Several Items of Interest” and “War Bride” are part of Wilber’s ongoing series about the S’hudonni, aliens who more or less benignly conquer Earth in part be­cause our grain makes great booze. These tales, however, take place partly on the home planet of the S’hudonni Empire, with the title character of “War Bride” saved from Earth’s annihilation by his S’hudonni partner. “Several Items of Interest”, as the title suggests, offers scattered observations about the aliens, but its plot returns to the theme of failed ambitions and family tensions that show up so often in Rambunctious. The narrator is a kind of mid-list journalist who achieves a broad follow­ing by “sweeping,” essentially livestreaming his various assignments, but who disappointed his dad because his brother has become a famous scientist; now he faces the assignment of returning to Earth to oppose his brother’s growing resistance move­ment. Wilber is at his best with families, and the balance between a life of comfortable mediocrity and the chance to do “something real” – as Moe Berg puts it – seems to haunt his fiction and gives it a distinct and memorable, if at times almost elegiac, sensibility.