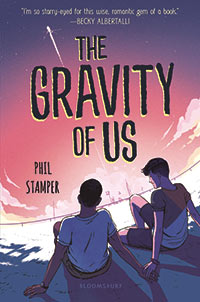 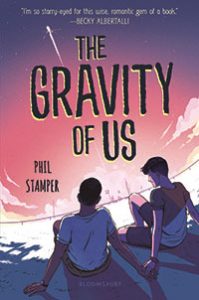 Set just slightly in the future, as the US trains astronauts for a mission to Mars, The Gravity of Us is a smart, heartwarming, and thoroughly relevant novel about teens swept up in the clashing ambitions of those around them. It brims with joy and drama, with a dose of treachery tossed in to keep the plot clipping along. It is hard not to layer on the superlatives when describing this book. Phil Stamper has done a wonderful job of capturing the tone of the golden era of spaceflight, while never straying into the depths of rose-colored nostalgia. I thought of Ray Bradbury a lot as I was reading The Gravity of Us, and my own childhood memories growing up on the Space Coast of Florida. But young readers don’t need to know chapter and verse of the Mercury, Gemini, or Apollo missions to enjoy this title; they just have to want to embrace some teens on a journey to find themselves, who are willing to push back hard on the bad intentions of those who surround them.

Cal Lewis is an independent teen journalist who has carved out a significant place for himself on social media’s hottest app. Loving every minute of his life in Brooklyn, he has been watching his pilot father’s pursuit of a place on the latest list of NASA astronauts with no small amount of trepidation. When word arrives in the book’s opening pages that Cal Sr. has been selected, the Lewis family has to pack up and head to Houston in a matter of days. It’s a whirlwind that leaves Cal equally angry and devastated. Then they arrive in Texas and he finds himself in a Wonderland-like creation designed to keep the public as fascinated with the Mars mission, and those involved in it, as possible.

To boost excitement about the space program, and keep federal funds flowing, NASA has partnered heavily with a reality-TV program, Shooting Stars, which endeavors to provide viewers with a constant inside look at what is happening behind the scenes, which means dealing out a healthy dose of gossip about the astronaut families whenever possible. Harkening back to the 1960s coverage of the original astronauts, Shooting Stars also insists on a retro feel for how the families live, down to ranch-style houses and mid-century modern decor. All of this is actually really cool and Cal, who is fan of the era, is happy to embrace the external trappings. But as the show’s producers become more and more invasive in their coverage, and Cal learns from the other families that he has to play the part of happy astro-kid at all times, he rebels. With a massive online following, he becomes determined to share with his followers what NASA is really like and why the mission matters. Along the way, he develops a mega-crush on Leon, whose mother is also an astronaut, and forms a tight bond with him and his sister. As the three teens work to reveal the Shooting Stars agenda, Cal finds himself building a new home and pursuing a new dream of romance and success in Houston.

The Gravity of Us is just so damn smart. The kids aren’t perfect – Leon is battling depression and Cal makes more than a few impulsive choices – but man, they are so compelling! Stamper is clearly a big fan of the space program (as he explains in a brief afterword) and around these wholly believable teen characters he has written a glorious love letter to both NASA’s past and its potential future. More than that, he nails both how destructive our social media obsessions can become and also their possibility for ushering positive change. That he manages to include a truly sweet romance in the midst of this important social commentary, while successfully crafting an ebullient near-future science fiction title is fabulous. I’m calling it right now; The Gravity of Us is one of my favorite reads of 2020. 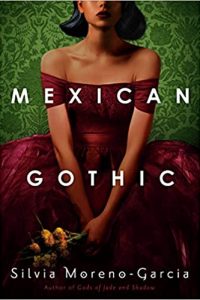