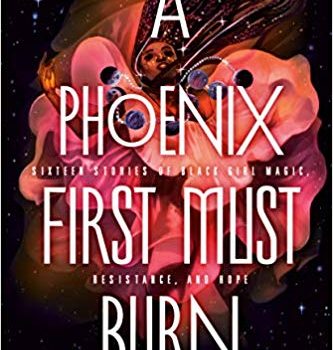 In the new teen anthology A Phoenix First Must Burn, editor Patrice Caldwell has collected a group of 16 stories celebrating “Black girl magic.” The authors include several YA heavy hitters such as L.L. McKinney, Dhonielle Clayton, Justina Ireland, Elizabeth Acevedo, and Rebecca Roan­horse, and the topics range from an interstellar confrontation about the Earth’s future to a young star of a paranormal TV series coming to grips with a startling revelation about herself. Overall, the collection ranges through multiple time pe­riods, from science fiction to fantasy (especially with witches) and easily fulfills its promise of celebrating Black girl protagonists. Demand for A Phoenix First Must Burn is obvious and I expect that several of these stories will also see some extra love at award time.

For science fiction fans, author Amerie offers an orc invasion, a wormhole, some time travel complications, and the all-too-human problems of miscommunication in “When Life Hands You a Lemon Fruitbomb”. Meanwhile, here on a slightly different planet Earth, “All the Time in the World” by Charlotte Nicole Davis puts her protagonist in “Steele City” where contaminated water has resulted in some unexpected outcomes. (This is not a zombie story, thank the gods!)

Elizabeth Acevedo’s “Gilded” is set in 1521 among the enslaved Taino people on the island of Hispaniola. The author slides deep into his­tory here, offering a more positive future for the Taino people, who were tragically rendered extinct through murder and disease, courtesy of European contact. Roanhorse also writes historically, about a confrontation in a post-Civil War western town between someone who had it coming and a young woman who made a bargain with the dark to make sure retribution would be hers.

Alaya Dawn Johnson’s “The Rule of the Land” takes readers into the realm of pure fantasy, while highlighting family dynamics on a mythic scale, in the midst of a cataclysmic storm and enemy inva­sion. “A Hagiography of Starlight” by Somaiya Daed challenges readers to consider what they would do for love, while L.L. McKinney reveals an example of thoroughly treacherous behavior in “The Goddess Provides”.

Justina Ireland’s “Melie” introduces a delight­ful apprentice sorcerer who encounters both mermaids and a dragon but still manages to eas­ily be the most beguiling character in the story. (Really would love to see Ireland go all in with Melie and craft a novel around her!) Then Danny Lore brings readers a more realistic setting with a neighborhood war between hairdressers in “Tender-headed”, which is most certainly the funniest story in the collection while also, perhaps, the most sincere as well.

Dhonielle Clayton’s “Hearts Turned to Ash” has a bit of Eternal Sunshine of the Spotless Mind coursing through its narrative, while decidedly set in the modern world and involving the magic of a local “conjure woman,” as opposed to a science fiction mind-wipe procedure. Danielle Page’s “The Actress” and Patrice Caldwell’s “Letting the Right One In” both feature vampires, but not the way you think (if you’re thinking about Twilight and everything it inspired). The television-based plot in “The Actress” manages to weave some paranormal drama into the Hollywood #MeToo era while providing a sweet love story to boot. Meanwhile, Caldwell takes a vampire-novel fan and teases her with an unexpected attraction at just the right time in her life. In both of these stories the drama is light, showing that there are a lot more ways to write about the fantasy/horror standby than have been explored in the past.

Hispaniola’s Taino name of Kiskeya is the setting for Ibi Zoboi’s “Kiss of the Sun”, which is the story that brushes closest to horror in the collection. With its firm Haitian roots, this tale is all about being comfortable in your own skin and the age-old problem of young women and the pressure to be pretty. Interestingly, “The Curse of Love” by Ashley Woodfolk is also about love and beauty, but its plot hinges on a family curse with a brutally high price to pay. (This is another one I’d love to read a novel about, because this curse really needs breaking!)

Gullah culture is explored by Karen Strong in “The Witch’s Skin”, where power is challenged on more than one front and one young woman decides to take a very bold chance. Finally, in the last story, J. Marcelle Corrie considers the roads possibly taken via a new technology that considers the odds of your options. “Sequence” is futuristic but also all about love and taking a chance, which makes it a lot more realistic than you expect.

Final verdict? A Phoenix First Must Burn is an enormously eclectic and entertaining collection. We need more Black girl magic – a lot more. And we need to be demanding why there hasn’t been more available to eager readers all along.