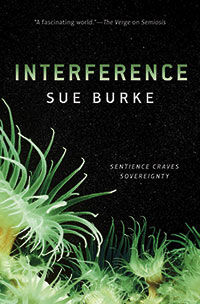 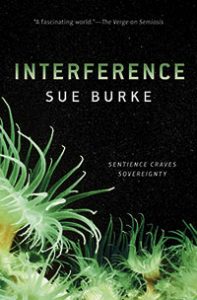 Sue Burke’s Interference picks up where her meditative Semiosis left off. After a brief opening chapter on Earth, she brings us back to the far-flung Pax Colony, which has come to a negotiated peace between its human colonists, its other alien species (the Glassmakers), and its sentient plant. Things are going about as well as can be expected on Pax. The planet keeps throwing potentially fatal challenges at its inhabitants. Said inhabit­ants keep finding new ways to not die. Some even thrive. The sentient plant makes sure they all know who to thank for all of the good things they have. Hint: it’s the sentient plant.

Life back on Earth has changed a bit since the Pax ship took off. Five billion people were killed by “NVA,” a woman on a mission who poisoned the food supply to save the planet. The survivors haven’t forgiven her for her crime. The powers-that-be ensure that an NVA clone is always on-hand, so that this genetically identical NVA will be put through all manner of torture for the rest of eternity. Those clones, however, are raised to believe they are just normal kids, so their eventual torture will come as a horrible surprise.

That idea of genetics being destiny is at the core of Burke’s writing, both here and in Semiosis. How far will a species go to ensure its survival, to say nothing of its growth and dominance? And is a person defined by their genetic material or does nurture play a part?

When Burke is focused on those questions, the story she spins around them is gripping. Like when Stevland, the sentient plant, manipulates the beasts around him to ensure his seeds travel back to earth. Or when Karola, who was next in line to be the official NVA, schemes to get off of Earth so that she can avoid that fate. Those are the plot points that keep the story moving.

Burke is less successful, however, in the meatier parts of the story where her characters live their lives and overcome obstacles. Her writing in Semiosis had an ethereal and magnetic quality, one that made the story feel as if it were being observed from behind a sheet of glass. That same tone in this book makes it feel like there are no real stakes for any of the characters, many of whom feel emotionally opaque, despite the events mak­ing it clear that there are consequences.

Regardless, Burke provides a lot of thoughts to chew on, even if the story itself doesn’t quite set an inviting table.