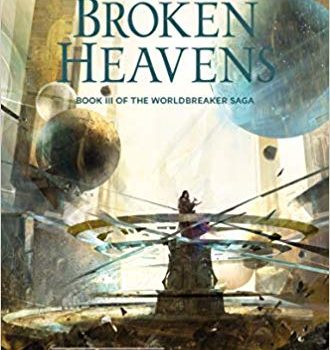 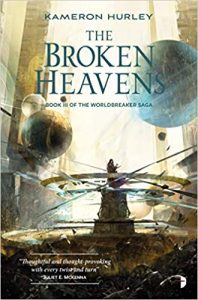 Kameron Hurley specializes in rubbing well-established genre tropes together until they create lightning. 2017’s The Stars Are Legion rocketed into uncharted space with all female characters and a heavy dose of unsentimentality towards bodies and their potential usefulness in a resource-poor environment. 2019’s The Light Brigade whirled together military SF and time travel to create the speed metal story of a grunt determined to fix a dystopian corporate FUBAR. These novels, along with her earlier Bel Dame Apocrypha, marked Hurley as a writer unafraid to sink her vision into the viscera and to stretch the edges of science fiction until they snap.

Now comes The Broken Heavens, the final volume of her vast fantasy trilogy the Worldbreaker Saga. The invading Tai Mora have assumed control over the planet Raisa, destroying the Sauduan Empire and enslaving the pacifist Dhai. The Tai Mora are refugees from another version of Raisa, driven by the need to find a safe haven, and they don’t care who they have to destroy in their search. Multiple versions of Raisa exist, each populated by the different versions of the same people; but duplicates can’t exist in the same universe. Before the Tai Mora Empress can close the connection between the two worlds, she must find and kill the duplicates of her family; until she can do so they are trapped on the dying planet in the other universe. Meanwhile, the orphan Dhai Lilia is determined to get her revenge on the Tai Mora, even if it means destroying Raisa itself to do so. There is no Good vs. Evil here. Indeed, Hurley rejects the binary in all its manifestations; she has created a world of multiplicities: of characters, of genders, of races, of abilities, of choices, of strategies for survival.

As one would expect from a Kameron Hurley novel, technology here is organic in nature. Magicians known as jistas draw power from the mysterious satellites in the sky whose influences fluctuate with their movement and who appear to have set the multiverse in motion. The temples that control the satellites are not mechanical; they require blood and bodies to operate. The land itself is poisoned, resources exhausted, and foliage gone feral, feeding on human flesh. Hurley’s signature body horror style is on full display here; there’s no shortage of blood and guts in this book. But there’s no malice to the violence, no sense of sadism, and, refreshingly, no sexual violence. The Tai Mora are not faceless conquerors; the Tai Mora empress is motivated by a desire to see her family to safety, not by grandiose ambition. The pacifist Dhai are not uniformly heroic; they are an assortment of individuals with their own conflicting beliefs on how to save their people.

The Broken Heavens is grim, but, interestingly enough, not dark. This is because Hurley is not interested in nihilism for its own sake, but in the drive to overcome trauma and the need to confront systems of oppression. Some choose to fight against these systems, others to co-opt them. Here power is not so much a means to ends, as it is a means to safety. Her characters struggle to create some kind of equilibrium and peace in a world of upheaval and violence. In this sense, The Broken Heavens is a book of hope, for it is about people trying to make things better for themselves, to forge a better future, even in the face of unspeakable pain and suffering.

The Broken Heavens is not entry-level Hurley, and it lacks the sheer gonzo-ness of her previous two novels. As the plot has been grinding merrily away for two books now, readers are left to play catch-up on their own and there’s a lot to catch up with. This is an extremely dense book, teeming with characters, some of whom confusingly have more than one version, and a whole lot of scheming, exposition, worldbuilding, magic, and action. At times the strands of duplicate characters and interlocking plot arcs can be hard to keep straight, but readers who have relished the previous volumes of the Worldbreaker Saga will persevere, eager to find out how it all ends. Their enthusiasm may be somewhat tempered by the book’s long haul, but they should find the ending, in which Hurley neatly eviscerates expectations, satisfying.