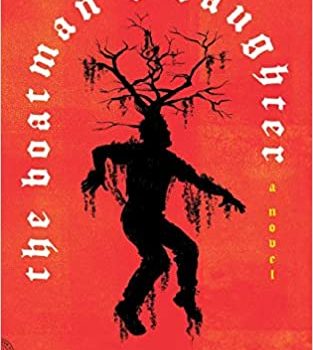 Andy Davidson, The Boatman’s Daughter (MCD x FSG Originals 2/20) This atmospheric supernatural fantasy follows Miranda Crabtree, a smuggler on the bayou, whose life intertwines with those of a mad preacher, an old witch, and a secret child. With various forces, human and otherwise, arrayed against her, Miranda may have to sacrifice all to protect the ones she loves.

Marina & Sergey Dyachenko, Daughter from the Dark (HarperCollins 2/20) In this standalone fantasy from the Ukrainian-born duo (translated by Julia Meitov Hersey), an act of kindness has dark and unforeseen consequences. DJ Aspirin helps a ten-year-old girl named Alyona, who claims to be a musical prodigy. When he becomes suspicious of her motives, he can’t get rid of her, and his ef­forts are thwarted by her protector: a teddy bear that may also be a ferocious monster.

Kevin Hearne, A Blight of Blackwings (Del Rey 2/20) Book two of The Seven Kennings series picks up after an invasion of giant warriors. Now, a new generation of characters must bring hope and revolution to the war-torn world. Revenge, magic, and sea monsters fill a rich fantasy landscape.

Justina Ireland, Deathless Divide (Balzer + Bray 2/20) More zombie horror awaits in this sequel to Dread Nation. Young Jane McKeene is trained to put down the undead – mostly by beheading with sickles – and she cuts a swath through 1880s America on her cross-country search for freedom.

Katherine Kerr, Sword of Fire (DAW 2/20) Kerr returns to the world of her bestselling Deverry novels with the first book in a new trilogy, The Justice War, about a student and the highborn daughter of a noble who join forces to reform the kingdom’s corrupt legal system… risking furious retribution from powerful people who like things just as they are.

Jess Kidd, Things in Jars (Atria 2/20) This weird Gothic novel is set in an alternate Victorian Eng­land where rich collectors compete with circuses to collect “oddities” – everything from mermaids to ghosts. Lady detective Bridie Devine is some­thing of a collector herself, though she protects those who would otherwise be preyed upon and displayed. When Bridie is hired to track down a collector’s missing daughter, she takes to the streets of London to confront dark secrets and her own past.

Silvia Moreno-Garcia, Untamed Shore (Agora 2/20) Moreno-Garcia dazzled us last year with fan­tasy Gods of Jade and Shadow, and she’s shown a deft hand with horror in the past, but this is some­thing new: her first crime thriller, a slow-burn noir historical set in 1979 Baja California, about a local girl who becomes entangled with three American tourists, with deadly consequences.

Steve Rasnic Tem, The Night Doctor and Other Tales (Centipede 12/19) This collection brings together 25 literary horror stories from the World Fantasy Award and multiple Stoker Award win­ner, with pieces drawn from the past eight years, including two originals and one work co-authored by his late wife Melanie Tem, who passed in 2015. The book itself is up to Centipede’s usual gorgeous standards, with illustrations by Gary Laib.

May 4, 2013 admin Comments Off on Online Periodicals, early May

WisCon 44 was scheduled for May 22-25, 2020 at the Concourse Hotel in Madison WI, with Rebecca Roanhorse and Yoon Ha Lee as guests of honor. Because of the CO­VID-19 pandemic, the convention was converted to a virtual event, their first “all-online con,” held on the same dates, with additional events on the evening of the 21st. Roanhorse attended virtually, but Lee was unable to take part. There were 1,084