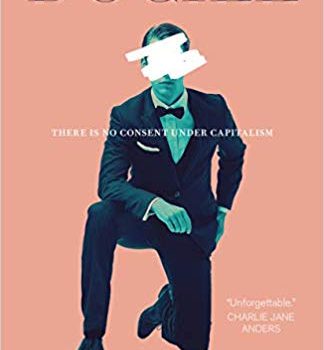 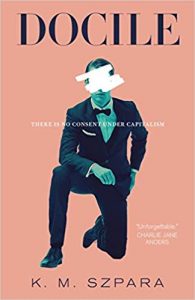 Docile is K.M. Szpara’s debut novel. I’ve been hearing about it for months, and my interlocutors have used words like “kinky,” “sexy,” “hot,” “important,” and “squicky.” Now I’ve read it, I can safely say that while I’m sympathetic to its aims and its thematic arguments – and even though intimate explorations of power differentials in relationships are my jam – I’m definitely a ways outside its target audience.

In the near future, the American capitalist dysto­pia has become even more authentically itself. In this future, the monetary debt of individuals is not dischargeable through either death or bankruptcy, and the US is well on the way to recreating a slave class in the form of people who are forced to enter indentured servitude in order to discharge their (inherited) debts. The indentured servants of the future are called “Dociles” and among the few rights they retain is the right to either take or refuse a drug called Dociline.

Dociline suppresses volition, turning those who take it into perfectly compliant slaves. And those who take it do not remember their time under its influence. Its effects supposedly do not endure after one stops taking it, but this – as becomes clear in Docile – is somewhat less than perfectly accurate in all cases.

As an aside: Szpara really doesn’t delve too deeply into the absolute horror-show of possi­bilities opened up by “perfectly compliant slaves who don’t remember what happens to them,” given the American history of slavery and the nation’s history with supporting workers’ rights, it feels a bit like flinching. As a second aside: I do feel like all these near-future dystopias take for granted that the UN’s Universal Declaration of Human Rights is an empty document that no one will try to enforce or live up to: Article 4: No one shall be held in slavery or servitude; slavery and the slave trade shall be prohibited in all their forms. Article 5: No one shall be subjected to torture or to cruel, inhuman or degrading treatment or punishment. Article 6: Everyone has the right to recognition everywhere as a person before the law.

Elisha is a young man whose family is in seri­ous debt. His mother never recovered from her term as a Docile. His younger sister is 13. He decides to sell himself into servitude for a life term, in order to clear his family’s debts – but he wants to remain aware of who he is, so he’s adamant that he won’t take Dociline.

Alex is also a young man, but his life has given him privilege that Elisha can’t even dream of. Alex is the CEO of the corporation that produces Dociline, and he’s under intense pressure to pres­ent the perfect image to the board (which includes his father, the former CEO) and to the world. He buys Elisha’s contract to have a combination of living sex toy, valet, and domestic servant – in part to escape escalating pressure to get married – and when Elisha declines to take Dociline, Alex feels extreme pressure to mold Elisha into the perfect (compliant, submissive) Docile even without the aid of the drug.

The first half to two-thirds of the novel involve Elisha developing a rampaging case of Stockholm Syndrome and Alex subjecting Elisha to operant conditioning and behavior modification. Alex falls in love with the person he’s turned Elisha into and begins to realize how fucked up both his behavior and the system he epitomizes are. But his attempts to make amends are challenged by his father – who has Alex committed to a mental hos­pital and pursues a suit against Elisha for fraud. Elisha, meanwhile, has been rather damaged by his experiences. The latter part of the novel is Elisha’s struggle to recover his sense of self and autonomy, Alex’s struggle to make amends, and their joint struggle to begin to interact with each other on more equal terms.

In many ways, this is a compelling exploration of coercion, affection, complicity, and the nature of consent. Szpara is a persuasive writer, and his choice to alternate chapters between Elisha’s first-person narrative and Alex’s point of view – also told in the first person – is one that propels the reader into sympathy with both of these characters. (Alex is a monster, but he’s a monster made by his society, and by comparison, he’s a lot less monstrous than most – but his humanity only throws the monstrousness into higher relief.)

The only problem: I don’t like it. Narratives that involve behavior modification to the point of utter dependence – learned helplessness – are deeply disturbing to me. That, combined with the sexualization of the master-servant relationship, turns this into a novel containing multiple sexual acts where one party has either extremely limited or no real capacity for meaningful consent. Elisha is raped, multiple times, and his rapes are physically pleasurable for him and graphically described. It feels pornographic, and not in a good way: I don’t like feeling as though the intent of the text during the sex (rape) scenes is partly to arouse the reader. (Elisha’s reclaiming of his sexual agency in a (same-gender) BDSM context later in the novel is much easier to read and much less disturbing.)

Docile never loses sight of the fact that the re­lationship between Elisha and Alex is fucked up. But it’s structured, in terms of its emotional beats and pacing, something quite like a romance, and it holds open the possibility that a future may exist where they can have a relationship that’s freely chosen and therefore less fucked up. If this book had a heterosexual central pairing, it’d be a pretty mess. As it is, the fact that both main characters are men allows Szpara to examine the power dynamics inherent in his premise without the obscuring curtain of patriarchy. I’m not entirely sure he succeeds, but like it or loathe it, there’s no denying that Docile is trying to ask interesting questions about capitalism and consent.