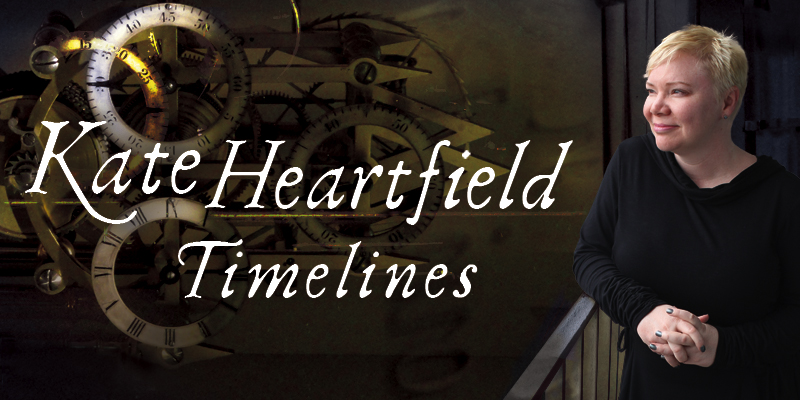 Kate Heartfield was born January 6, 1977 in Kitchener, Ontario, and moved throughout the province with her family before settling outside Winnipeg. She spent a year after high school backpacking in Central America, then moved to Ottawa for university. She graduated with a degree in political science in 1999, then earned a master’s degree in journalism at Carleton University in 2001. She freelanced for a few years before taking a job at a daily newspaper, the Ottawa Citizen, where she ran the Opinion section. She spent 11 years on the editorial board there before leaving in 2015. She teaches journalism at Carleton.

Heartfield published some literary short stories starting around 2000, and began publishing genre work in 2013. She has produced about 30 stories since. Novella Alice Payne Arrives (2018) was a finalist for Aurora and Nebula Awards, and sequel Alice Payne Rides appeared in 2019. Debut novel Armed in Her Fashion (2018) won an Aurora Award and was a Sunburst and Crawford Award finalist. Historical fantasy The Embroidered Book is forthcoming.

She also writes interactive games, including Nebula Award finalists The Road to Canterbury (2018) and The Magician’s Workshop (2019), both from Choice of Games.

Heartfield lives in Ottawa with her family.

“I used to go to the Winnipeg Public Library and come home with two bags of books every couple of weeks, and definitely read a lot of science fiction and fantasy, but I also read historical fiction and whatever else looked interesting. There were books all over the house – having books and musical instruments in the house is the best thing you can do for kids. Everything else is kind of optional. The very first book I read was probably a picture book of the Three Billy Goats Gruff. I really loved The Hounds of the Morrigan by Pat O’Shea, about two Irish kids who encounter fairies and supernatural beings in contemporary Ireland, and it’s just so beautifully written and not dumbed down at all – the sentences are interesting and the mythology is complicated, but it’s a book for kids. It has these wonderful images that stuck with me forever. There are hounds that take the form of long, lean men in trench coats, and when I was a kid that terrified me, but in a good way. I was big into Tolkien too, which is stereotypical, but true.

“A lot of the stuff I read as a kid took place in the British Isles – it just happened to be the stuff I was drawn to. I liked Susan Cooper, and Rosemary Sutcliff, whose books are about British history. My dad was born in England and came over to Canada, so even though I was born in Canada, a lot of my story heritage is British. That seems to be where I go in my writing, though I have a lot of short stories set in Canada, and I have one trunk novel set in Ottawa, where I live. I would like to return to Ottawa at some point for a better novel, but so far my published books have been set in Europe. I didn’t set out to do that, but those were just the ideas that took hold.

“I don’t remember ever not writing. As a kid I wrote a secondary world fantasy novel on my dad’s Osborne computer, which had a tiny little green screen, when I was nine or ten. I’ve always wanted to write books, and always have written, for the most part, though I took some time off in my twenties when I was in grad school and starting to become a journalist. I was just too busy to write fiction in those years. For the most part, I’ve always been writing, but I’ve only recently started to publish.

“My journalism background does impact the way I write. A lot of the thematic concerns are the same for me. I explore the same things in fiction I did with journalism, just from a different angle: how do you make good policy, how do you make a society that works for everybody, what is just and what is fair, as well as narrative and the human experience. On a practical level, journalism taught me not to be too precious about my work and to meet deadlines (most of the time). I’m not too concerned if I know I have a deadline coming up, because I’m used to the hectic pace of a newsroom. Journalism is not like fiction, because a story might get changed on the desk at the newspaper and no one’s going to tell you about it. You definitely can’t be a prima donna about style – the newspaper style is the newspaper style, and you just do it. That’s helped me with fiction, because I don’t get my feathers ruffled easily. If an editor tells me to cut something, I just cut it and move on. There are always exceptions, when an editor doesn’t understand what you’re trying to do, and you can push back against that, but for the most part I don’t argue over little things.

“While I was doing both of my degrees and a little bit after, I would occasionally write a short story and send it off. In those days I didn’t think of myself as a genre writer, though I had grown up reading science fiction and fantasy; I was a literary writer. I wrote some stories and a few of them miraculously got published. I had no idea what I was doing, and I thought you were supposed to send stories to one or two places, and if they got rejected, that was it – they were bad. I had no idea you could keep sending things out. I don’t even know how I got anything published. Then I took some time off from fiction for a little while.

“Around 2007, I started to think, ‘Why don’t I write what I like to read? Why don’t I start writing some genre fiction?’ The second epiphany I had was that maybe I should learn how to write. I grew up with this feeling that writing ability was innate, either you have it or you don’t, and you don’t interfere with the muse, it just comes to you. Then I thought, ‘Maybe that’s crap. Maybe I should learn what I’m doing.’ I started to take some courses and read some books, and did a correspondence course in creative writing through Humber College in 2007. They have a novelist who’s a mentor, and over the course of several months you send them bits of your novel and they respond with feedback. My mentor was Paul Quarrington, a wonderful Canadian novelist who died in 2010. He was so helpful to me. His books are great and he was a wonderful man. I still have his emails and I refer to them all the time, because he really got what I was trying to do, and helped me to understand how my habits are strengths, but can also be weaknesses if I don’t recognize them. I started trying to work on my craft, and trying to really focus. I wrote shorter fiction to learn how to tell stories, because I had novels in the trunk that were just long stretches of words with no story there. I had to learn the basics of storytelling. I’d always written, but I had to realize I wanted to write science fiction and fantasy, and that I had to learn how to do that, and not just assume the words would come from on high somehow. That really changed things for me.

“Near the end of 2012, I started to sell short stories. The first one I sold was ‘We Take Care of Our Own’, to an anthology called Blood and Water by Bundoran Press. The editor is now a friend of mine. In 2013 I sold sev­eral short stories and became a member of SFWA, and the following year I signed with my agent, Jennie Goloboy at Donald Maass. That’s when it all started to fall into place.

“The first full novel I finished was a contemporary, coming-of-age Canadian story, and then I wrote a straight historical fiction novel. The third one I wrote in 2007 was historical fantasy. I don’t know where I got this idea that to be a serious writer you have to be a literary writer and you can’t write science fiction and fantasy. I don’t think I even would have said that out loud, and I don’t think I thought that about any other writers. I just had this deep-seated feeling that SF wasn’t serious enough, somehow, even though that’s ridiculous. Now I hate that idea. I don’t know what triggered my epiphany. I think it was just growing up at some point and realizing, ‘This is who I am, and this is what I want to write.’ That worked for me.

“Novels are what I always wanted to do and where my heart really is. To me, holding the book that you wrote in your hands is the greatest thing in the world. I also love short fiction, especially after several years spent focusing on that in order to get better. I do still write short fiction, but I don’t get to it as much as I’d like anymore; stories are what I do when I’m taking a break from a long project.

“The first thing I did as part of the SF community was Worldcon in Montreal in 2009, and I went in a hybrid capacity as a journalist and a fan. I was going to go anyway, because I was a fan of Neil Gaiman and he was the guest of honor. I didn’t really know much about Worldcon at the time. I was not clued into that world at all. I went and saw some people from Ottawa there and also met Cheryl Morgan for the first time. I was talking to her about the difference between a fan and a reader – I didn’t understand what fandom was all about, and that’s where I started to get interested in the community more. I realized I could find my people at these events. Since I knew some people from Ottawa because of Worldcon, I started to go to more things in Ottawa – particularly Can-Con, our local convention every year. The Can-Con community is the core of Ottawa fandom, and then it goes out from there. I also joined a writer’s group called the East Block Irregulars. I had a critique group all of a sudden, and I had a con­vention every year, and eventually I had a quarterly reading series I attended. Partly I was keying into things, and partly Ottawa’s community was going through a renaissance at that period. We have this wonderful community now, and for a city that size, it’s amazing how strong it is.”

Read the full interview in the April 2020 issue of Locus. 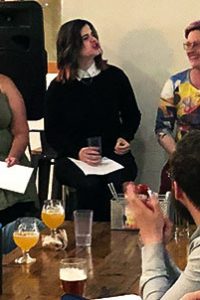