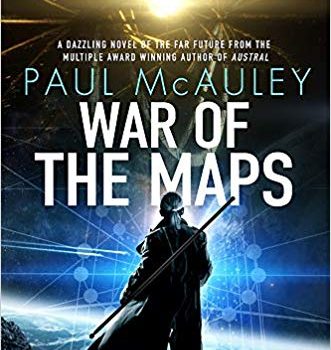 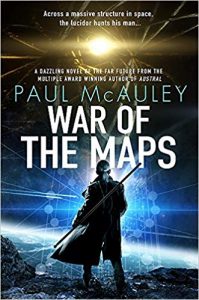 More than 20 years ago, Paul McAuley established his bona fides as a master of the ancient-far-future tradition of Vance and Wolfe with his Confluence series, set on an oddly shaped artificial world with a deep history that unfolded in fragments over the course of three volumes. With War of the Maps, he offers an even more spectacular setting: a Dyson sphere surrounding a dwarf star, on the exterior surface of which survive various cultures descended from a barely remembered age of Ur Men, godlings, and First Peoples. With gravity and heat provided by the dying “Heartsun” and illumination from arcs of mirrorlights in the sky, these widely scattered societies occupy an almost unimaginably huge surface area, much of which is covered by a vast World Ocean. The maps of the title refer not only to the various regions of the world, but to the genetic “life maps” of its inhabitants, which are threatened by a growing invasion “that infects plants and animals and people and turns them into strange new forms.” So, while McAuley’s title might imply the sort of warring pseudo-medieval kingdoms so beloved of fantasy trilogists, his scenario is quite a bit more complicated, with elements that recall the transformative plagues of novels like Ian McDonald’s Chaga. The most immediate threat seems to be the “alter women,” products of an infectious algae bloom which had killed off men and children and turned the women into subhuman monsters. For those who enjoy worldbuilding as an art almost independent of narrative, much of the pleasure of the novel derives from slotting in the pieces as the protagonist makes his way on an epic journey across the surface of this world.

Although we are told several names and aliases for that aging protagonist, McAuley consistently refers to him simply as “the lucidor,” referring to his former position as a lawkeeper in the map known as the Free State. This has the no-doubt-deliberate effect of simultaneously distancing the reader and mythifying the character – as though the hero of a Western were simply called “the marshal” or “the gunslinger.” But the lucidor proves to be more than a simple archetype, still mourning his dead wife after several years and not quite certain if his dogged pursuit of the arch-criminal Remfrey He is simply a personal obsession or an idealistic quest for justice, if he’s effectively abandoned his official duties and gone rogue. Still, as he passes through various settlements and cities in his quest, sometimes helping them with their own problems, one of them greets him “as if a hero has stepped from one of the old stories.” Much of the first half of the novel develops a kind of “Heart of Darkness” sensibility, as the lucidor’s search for a powerful renegade reveals an ever-expanding picture of his world and introduces some memorable secondary characters, such as a scientist named Orjen Starbreaker and her steward Lyra, who become key players. We learn that the lucidor’s world is a mashup of ancient and primitive technologies – horse-drawn carts along with self-propelled “runabouts,” microscopes, centrifuges, even aircraft – and that some of its denizens possess almost magical powers, like map readers who can interpret and sometimes alter genetic makeup, or “electrickers” who can disable people with electric shocks. The lucidor’s own particular power, which comes in handy at crucial points, is that he is a “suppressor” who can cancel or weaken the powers of others.

It’s not too surprising to discover that Remfrey He has decided the invasion is a good thing, a chance to develop a more efficient, hive-like society such as that of the alter women, but when he finally appears onstage his demeanor seems a bit too familiar – part smugly arrogant Bond villain, partly mad scientist promising “a utopia in which everyone knows their place and works for the common good, without war or strife, crime or hate.” “And without freedom or love or individuality,” responds the lucidor, gamely matching cliché for cliché. In many ways, the archetypal contest between them is far less intriguing than McAuley’s increasingly evocative settings. When, in the second half of the novel, the lucidor undertakes a hazardous sea voyage to uncharted parts of the vast World Ocean, we pick up hints of everything from “The Rime of the Ancient Mariner” (the ship actually gets becalmed after crewmen shoot down a huge bird) to William Hope Hodgson’s nautical nightmares – leviathan sea monsters, spider crabs with infectious bites, ominous red seaweed. Like Vance and Wolfe, McAuley achieves an almost oppressive sense of the weight of ancient history, but with more of a classic, hard-SF edge. Fortunately, he also offers us a varied and fascinating cast of characters who credibly might have grown up in a such a setting, drawing their beliefs and values from a vast world they only glimpse through fragments and rumors. The spectacle is undeniable, but it’s that rich cast of characters who give their world texture and resonance, and who finally turn War of the Maps into a fine, compelling novel. 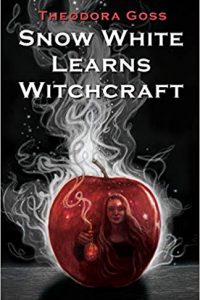 One thought on “Gary K. Wolfe Reviews War of the Maps by Paul McAuley”