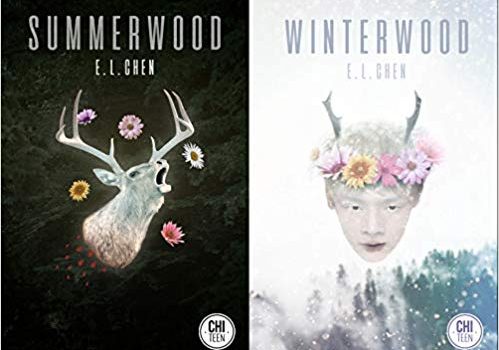 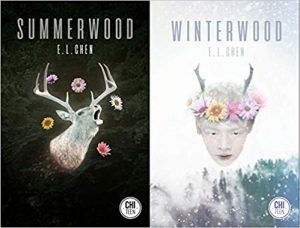 In the Summerwood/Winterwood duology, author E.L. Chen riffs on the “other world behind the hidden door” genre with a tale that draws deeply from Narnia while also focusing on the real-world stories that make such fantastical places famous. Young Rosalind Hero Cheung is almost 13 and yearning for adventure in Summerwood and a world weary sufferer of PTSD in Winterwood. How she transforms from one version of herself to the other (and stops using her middle name Hero, in favor of a new nickname, Lindy) is the journey mostly contained in the first book. The second is all about her continued struggles from the earlier experiences and how she gets drawn back in again (those pesky hidden doors just keep appearing). Together, they provide something new in a somewhat familiar setting, albeit with a dead cuddly creature along the way. (I always feel compelled to warn about that sort of thing as Old Yeller and Bambi’s mother really messed me up when I was a kid.)

The Summerwood is a place that Hero’s grandfather created in a short series of books about the adventures of three children loosely based on himself and his brother and sister. Hero and her older sister are dumped by their parents on their grandfather for a forced visit just as his decades-old books are enjoying a resurgence (thank you, Harry Potter fans) and he is struggling with a sequel. Grandfather is, to be frank, a total jerk. His younger brother is long dead (after moving far away) and his sister Vivian died when she was a child. How in the world he ever ended up married and had a child himself is a mystery, but now long divorced (but with an oddly attentive and equally grouchy housekeeper), the famous writer is determined to both squash his granddaughter’s interest in Summerwood while somehow crafting another book directly aimed at her age group. (He’s a jerk – got it?) So begins a long, boring vacation until the parents either get their marriage back on track or file for divorce. Either way, the girls are bored and miserable for the duration. Hero determinedly spends her time looking for the door to Summerwood in every nook and cranny of Grandfather’s house. Of course she finds it and of course everything goes to hell soon after.

Summerwood is a mash-up of all things C.S. Lewis, Beatrix Potter, and Hans Christian Andersen with the aforementioned Narnia overtones. Hero meets some innocent forest dwellers and a glamorous queen who gives her a mysterious but important heroic charge. She then goes off to get her sister and bring her back to Summerwood (so she has a witness to her heroics!) and then she discovers everything is not as it seems. The queen is bad. Awful things are happening to the forest dwellers. Hero has to become a murderer of an innocent godlike creature and her sister becomes a total bitch for no reason. Summerwood ends with a fire, the sisters at odds and Grandfather delirious with joy because Hero kept a diary and he now has it and so his writer’s block is cured. Then, on to Book Two where Lindy tries to right some wrongs from that first adventure and develops a crush and sort of gets to the bottom of why Summerwood is like it is (although it is now under a Christiansen-like cold snap and thus the book is called Winterwood). Some wrongs do get righted (although this seems largely in spite of Lindy and not because of her), and there is a happy ending, except for those innocent forest dwellers who are still dead. And then Lindy goes home and gets some therapy in the real world which, frankly, she really needs.

As typical hidden world adventures, Summerwood and Winterwood are perfectly fine. It’s when dealing with the parental drama back home that things get frustrating (the conflicted mother/daughter relationship seems designed merely to create necessary plot point drama) and the grandfather is a flat, two-dimensional villain who doesn’t even appear in the second book. As for the mystery of Summerwood… it is never explained, nor is the big resurrection in the second book. Chen requires that her readers cast aside the big questions when they come along for this magic ride. That will likely work for some but, if you are the inquisitive sort, this adventure might be better left to others.