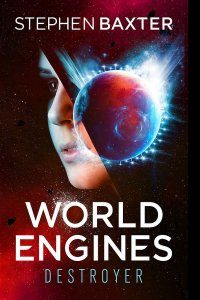 Stephen Baxter’s novels are generally busy, multi-motif crossroads – interstellar voy­ages intersect with alternate history, space opera crosses into cosmology opera, alien inva­sions get disrupted by time travel, and whole libraries of SF tropes compete for our attention in narratives that often require multiple volumes to work out their complexities and variations. World Engines: Destroyer fits right into that pattern, since its covers enclose what might otherwise constitute the first two volumes of a series that promises to spiral far out from its beginnings.

Part One (of five), which occupies nearly half of this volume, could easily have been an initial book by itself, with its own narrative arc and thematics. It opens with rocket jockey Reid Malenfant (we’ll come back to exactly who he is) awakening some five centuries after a shuttle-booster accident should have left him permanently and irrecoverably dead. The reason for his resurrection is crucial to the entire story line, but most of this novel-length first section is dedicated to introducing Malenfant to a world that has, over the intervening 500 years, come through a series of global-warming-generated crises. The survivors have established a stable, world-wide technological civilization, though one with a drastically reduced population and a cultural ethos that the hard-charging ex-fighter-pilot/entrepreneur/astronaut finds puzzling and frustrating. It’s a sleeper-awakes scenario, a guided tour that gradually unfolds the social, economic, and technological underpinnings of this world while withholding some of the details that will drive the plot of the rest of the book and, presumably, its sequel(s).

This section also tantalizes the reader and Malenfant with the titular device that hangs over the novel’s mantelpiece: the Destroyer, a wandering body out at the farthest fringes of the solar system, is going to come crashing through the neighborhood in 928 years, disrupting orbits and rendering the Earth uninhabitable. Everybody knows this – there’s even a countdown clock on the wall of Malenfant’s hospital room – but no­body seems to be engaged in doing anything about it. Humankind, once capable of all manner of off-planet activity, has withdrawn from such enterprises and seems content to sit and wait for the disaster.

So Malenfant has a lot to figure out. He is told that his defrosting is a response to a radio message from his wife, astronaut Emma Stone, thought lost five hundred years earlier on a mission to investigate anomalies on the Martian moon Phobos, and Part One is divided between Malenfant’s introduction to his new world and his stub­born pursuit of information about Emma’s fate, the Phobos mission, and the nature of the Destroyer. Answers are slow to arrive, but Malenfant gains allies of a kind: his android medical attendant, Bartholomew; a teenaged volunteer orientation companion, Deirdre; and eventually various of the artificial intelligences that help maintain the world while scrupulously not intervening in human decision-making (until they do, sort of). Malenfant’s efforts are opposed by Deirdre’s resentful mother and by a law- and custom-enforcing proctor, both of whom repre­sent mainstream conventional wisdom and find the resurrectee’s questions, curiosities, and ambi­tions disturbing and disruptive.

Reid Malenfant is indeed an annoying, impa­tient, often abrasive character, and for Baxter’s au­dience a familiar one. Versions of him and Emma Stone have featured in Baxter’s three Manifold novels (1999-2001), so it is not much of a spoiler to reveal that this Malenfant is not the Malenfant of those books, nor is this any of those worlds. Nor is it ours, since it split off from our history in 1969, with a different outcome for the first moon landing and a strange evolution in the sentiments and behavior of Richard Nixon, resulting in an ambitious space program that eventually enables extensive exploration, habitats, and settlements on the moon and Mars, as well as the evolution of highly developed artificial intelligences able to respond to the crises of climate change.

Malenfant’s search for answers offers a frame­work for a tour of this alternate history – a vision of how slow-rolling climate-change half-drowned and depopulated the globe and how humankind came to its senses sufficiently to cope with it by developing a near-utopian, sustainable, high-tech/low-impact world order. I confess that, gloomy Gus that I am, I found this part of the novel’s speculation more cre­dulity-straining than the cosmic machinery of the book’s second half, but the picture of a world-wide, fine-grained participatory democracy rooted in a sense of planetary stewardship is pretty attractive.

The four sections that make up the second half of the book shift mode and setting, as Malenfant and companions leave Earth behind. Discoveries, encounters, and marvels multiply in intensity and kind, the cast grows in number and strangeness, and everyone drops through a series of cosmic trapdoors. None of this can be described in much detail lest there be Spoilers. There are, however, clues and signals indicating where things are heading – first, clearly, to Phobos in search of Emma Stone – and readers familiar with Baxter’s handling of the multiverse trope in, say, Proxima and Ultima (2013-2014) will suspect that there be might be encounters with even more alternative histories. This makes for a series of shifts in scale and perspective, ever upward or outward – in any case, dwarfing the relative coziness of Earth, 2469 CE. The transition from sleeper-wakes and utopia-touring to journey-into-mystery is not jolting, but it certainly makes the book feel like a two-for-one offer. It’s almost as though the message is “stable quasi-utopias are all very well, but a hero’s gotta do what a hero’s gotta do.” And while some moderately large ques­tions do get answered, at book’s end Malenfant and company still have plenty of doing to get on with, however many volumes (and universes and subgenres) it takes. 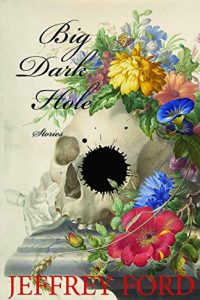