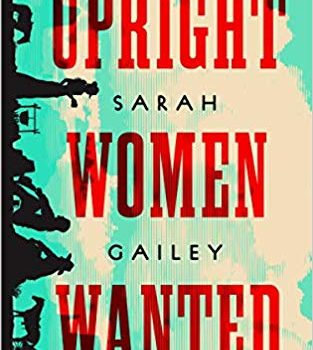 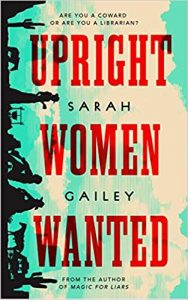 I’ve read enough of Sarah Gailey’s work at this point that I’m reasonably sure I enjoy their work more in concept than in execution, but they are such appealing concepts and, with Up­right Women Wanted, the concept is squarely in the centre of any graph of things I love in fiction.

Upright Women Wanted sets itself in a future American South/Southwest that owes a lot to the Westerns of the past. This is a dystopian future America ruled by fascists – homophobic, misogy­nist fascists (so a lot like the past). In this future, Librarians – supposedly chaste, upright women – bring carefully authorised reading material from town to town.

Esther, the protagonist of Upright Women Wanted, knows she’s bad. She’s stowed away in the Librarians’ book wagon when it leaves her town because she thinks that if she joins them, she can try to become good, or at least to do good before her badness brings her to a bad end. Also, she wants to avoid the marriage her father has arranged for her, to a much older man who was previously engaged to her best friend Beatriz. Esther was in love with Beatriz, who was only just executed for possession of Unapproved Materials.

Yeah, Esther’s got a shit-tonne of socially ap­proved internalised homophobia going on there.

There are three Librarians associated with the wagon where she stowed away. Well, two Librar­ians and an Apprentice Librarian. It turns out that the Librarians aren’t quite the upright paragons of regime-approved propaganda-delivery that Esther thought they were. Librarians smuggle danger­ous, Unapproved ideas along with the official propaganda. And sometimes they also smuggle people who need to escape.

In the course of a road trip by horse and wagon across the arid lands of Arizona towards the border with Utah, Esther has to unlearn a lot of old habits of thinking – and decide where her loyalties lie. The Librarians are spies and agents in a long-running war, and if Esther decides that she’s not bad after all, that she deserves to live and love and be happy, then it’s a war that she’ll have almost no choice but to join. If she lives long enough to make that decision for herself. Circum­stances – and the people her Librarians are trying to smuggle to safety – might get her killed first.

Upright Women Wanted is deftly character­ised and has an interesting voice, but even for its brief page count, it feels slight. There’s not a lot of meat on its bones, and what meat there is, is un­dercut by how unusually talkative and trusting the Librarians are for people who could be executed if the wrong person lays evidence against them. (I find how quickly they allow Esther to uncover suspicious things about them to lack tension.)

Mind you, the American Western aesthetic has never been a narrative (mythic) landscape that deeply resonated with me, any more than I’ve ever really found journeys of growth and self-discovery about overcoming internalised homo- and queer-phobia to appeal. (They don’t speak to me. Narratives about overcoming your own obliviousness about your own sexuality, on the other hand – that gets a why you got to call me out like this? response of rueful recognition.)

Upright Women Wanted is fun and entertain­ing, but I’m not convinced it’s 20 quid worth of fun and entertaining. It might be 12 quid worth. On the other hand, it has queer librarians and gunfights in the desert, so who’s to say someone else won’t rate it more highly? 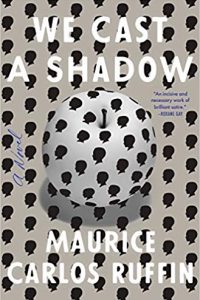