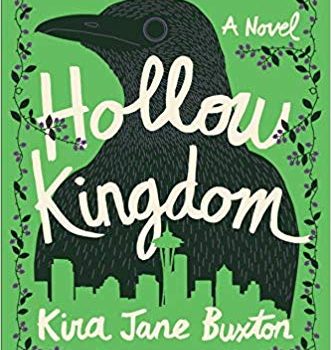 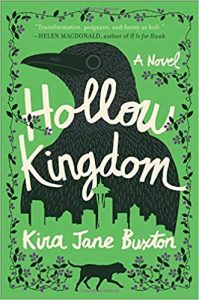 Kira Jane Buxton’s Hollow Kingdom is likely to bewitch quite a lot of readers. It uses breakneck adventure, unusual apocalyptic circumstances, and the natural allure of an intelligent animal world to appeal. The book has generous sprinkles of both humor and pathos, and extraordinarily lavish descriptions which characterize both the author and the world she builds. However, the whole experiment of this novel rests on the beak of its quirky narrator, a crow named S.T., and if he fails to charm, so, too, does the book.

The apocalypse of Hollow Kingdom most closely resembles the zombie model (shambling variety), although its source is not a biological disease. That source causes all humans to become rotting shells of themselves, and thus flora and fauna retake the world. S.T., a Seattle crow who has been raised and tamed by his human, Big Jim, must readjust to this new order, wherein his identification as more human than corvid proves a liability. Accompanied by Big Jim’s other pet, a bloodhound named Dennis, he roams Seattle, seeking food, shelter, and some evidence that humans are not becoming extinct. To S.T., the human world is superior: “I missed tidy, fresh-cut grass. All this long, tangled turf and greedy green devouring buildings made me nervous…. [Humans] kept a tight order to things, the world cupped in their hand, squeezing when necessary.”

Of course, in Buxton’s imagination, the natural world will undergo a “renaissance” without hu­mans. Many wild animals band together to rescue pets trapped in locked homes, and to figure out how to structure their future on a planet without people. Some of the most meaningful chapters in the book are narrated by creatures other than S.T. – polar bears wandering on shrinking ice, trees two centuries old, a humpback whale speaking in verse. (Some of the funniest, too: an imperious cat, a poodle who speaks of herself “in the third poodle.”) This optimism about the natural world feels slightly naïve, and often preachy, but it’s also intoxicating, especially when paired with Buxton’s lush descriptions:

From above, I could see how the foliage had declared war, bursting forth from the soil, electric-green and surging with life. Tropi­cal vines and stranglers were performing a creeping asphyxiation of the zoo. They were forming their own vertical superhighways as weeping willows surveyed them from above. Carnivorous pitcher plants with their baited jugs of acid had spread, readying for carnage. Bromeliads and Japanese quince and Tatar­ian honeysuckle, magnolias, red elderberry, English laurel, and bishop’s hat were active commanders in this battle, all wild and hungry and glossy green.

Such descriptions, heavy with verbiage, may be found on nearly every page of Hollow Kingdom. The result is both tantalizing and exhausting, but that is true for the novel as a whole as well, especially with regard to its narrator.

S.T. twice describes himself as “waggish,” and it’s truly the best word for his voice and character. He’s a foul-mouthed, opinionated, often arrogant guide to the collapsing/rebirthing world, and the reader’s enjoyment of Hollow Kingdom depends to a large extent on whether she enjoys hearing him speak. He does learn from his mistakes, but sometimes with aggravating tardiness, and he does touch the heart, but sometimes via unnecessary or sentimental losses. S.T. resembles the narrators of Stephen King at his most indulgent – jocular, vulgar, full of their own idioms: “Of all the dogs in all of this supposedly round ball the size of, like, a thousand Seattles, I got stuck with the only one who speaks almost entirely through body language? The Tarzan of the canine world? You’ve got to be fucking kidding me.” He will not trouble all or even most readers, but for others he will grate so badly as to render the book impossible.

Ultimately, Hollow Kingdom is a pleasing novel with the same ups and downs, the same gains and losses, as any classic pet adventure (Homeward Bound: The Incredible Journey springs to mind). It mixes an apocalyptic note into the proceedings, adding tension and gravitas, particularly for those who’ve considered that human extinction has its up sides for the rest of the planet. Despite the failures of its execution – the descriptions and narration make it overlong, the environmental messages can feel obvious – the novel will succeed with animal lovers and fans of light apocalypse literature alike.