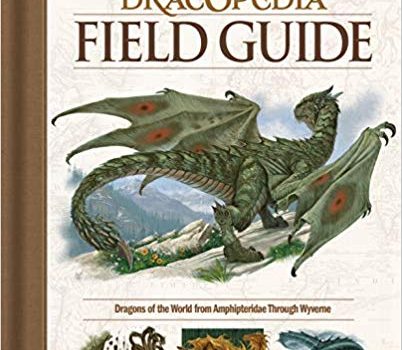 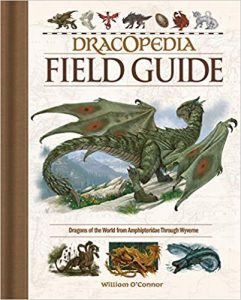 Over the course of William O’Connor’s 20-plus-year career, he won many industry awards, was nominated for a Chesley, and created over 3,000 illustrations for gaming and publishing businesses including Wizards of the Coast, Impact Books, Blizzard Entertainment, WhiteWolf/CCP, Lucas Films, and Activision. He also devoted his time to writing and illustrating the best-selling Dra­copedia book series (Dracopedia, Dracopedia: The Bestiary, Dracopedia Legends, etc.) In these books, O’Connor shared his considerable knowledge and artistic chops about drawing and painting dragons with his eager readers, many of whom were fledgling artists.

Unfortunately, O’Connor died before he could complete what became the final book of the series, The Dracopedia Field Guide. His wife, Samantha O’Connor, and friends including Tom Kidd, Scott Fischer, Dan dos Santos, Donato Giancola, and Christine Myshka, helped finish it. The Dracopedia Field Guide is a beautiful, encyclopedic reference work to the uses, varieties, and peculiarities of scaly, fire-breathing, fantastic imaginary creatures. This last volume has excel­lent production details, full color, clean, effective design, black and white as well as color art, on thick, satiny paper, and provides both tales of the dragons as well as instruction on how to sketch and paint them, with detailed discussions of the differ­ences between, say, a North American Wyvern and a British Spitfire Dragonette. It’s a lovely book and memorial to a talented, generous artist. 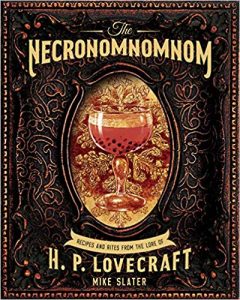 Of all the tie-in books one might imagine for the work of H.P. Lovecraft, a functional cookbook is not in the top five… or even ten choices that I would have imagined. Slime and Lovecraft, yes. Dangers of ocean swimming and Lovecraft, sure. But food and Lovecraft? A real nonstarter for me. The Necronomnomnom: Recipes and Rites from the Lore of H.P. Lovecraft by Mike Slater, edited by Thomas Roache, has proven me wrong.

Slater & Roache have created an affectionate, hilarious homage by way of recipes to all things Lovecraftian. The Foreword and Forewarnings lets you know what you’re in for right away: “We neither accept nor reject any mortal food religion,” the author writes. “The Necronomnomnom serves the will of the Great Old Ones – and they shall consume all.”

A lot of delightful design details have been lavished upon this book: an embossed board cover with gold foiled, high gloss paper, with loving, sepia-toned illustrations, and graphic detailing framing each page. Are there runes, you ask? Yes, of course there are runes.

Among the more memorable recipes: “Nog-Sothoth (serves as the Gate and the Key for 7 mortal beings of fortitude),” “Shogghoulash (serves 4, under strict hypnotic control),” and “The Side Dish Not To Be Named.” And don’t miss the Vegemitey Cthulu with its fried egg pop-eyes. I dare not men­tion the desserts and children’s dishes. In the interest of full transparency: I have not attempted to cook any of these recipes. Caveat Archimagirus! 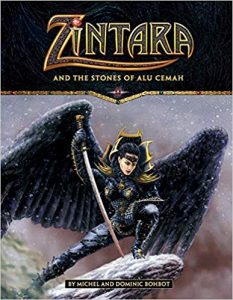 Fans of fantasy tales of strong women set in ex­otic, semi-medieval worlds will welcome the lively adventures of Zintara, a strong, courageous young woman in search of her family’s secrets, in Zintara and the Stones of Alu Cemah,

A very handsome illustrated book by brothers Mi­chel & Dominic Bohbot, the full color illustrations and page details give this large format paperback a lot of impact, although higher gloss paper would have really made these illustrations and details sing. The book’s perfect binding makes it look and feel, externally, like a graphic novel, but don’t be fooled – this is an illustrated novel. A board cover with a bit of embossing and foil might have added to the book’s appeal. The index to characters and map are excellent ideas, very helpful to readers. The brothers Bohbot are currently working on a sequel. 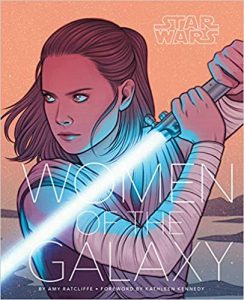 Large and lovely, Star Wars: Women of The Gal­axy celebrates girl power across the many iterations of the Star Wars franchise. It casts a spotlight on the courageous female players in the genre-shifting saga that upended the notion of girls in science fiction needing to be rescued.

18 female or non-binary artists contributed full-color portraits of Leia Organa, Rey, Padmé Amidala, Ahsoka Tano, and 72 others, including a droid, an Ewok princess, and Mama the Hutt. Varied mediums and approaches, from heavily stylized to realistic and beyond, make for an intriguing mix.

This hardcover book with dust jacket, printed on thick satiny paper, is a pleasure to page through. Each portrait is featured in alphabetical order in a full-page spread. Several characters – Leia, Padmé. and Rey – receive the royal treatment with several different portraits. This is one of the classiest, most appealing tie-in volumes I’ve seen from the Star Wars universe. Kudos to Chronicle Books.