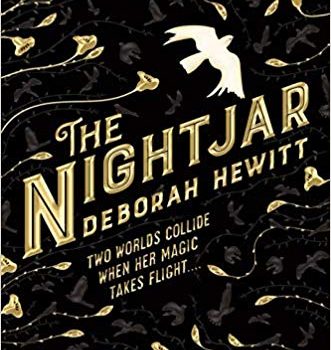 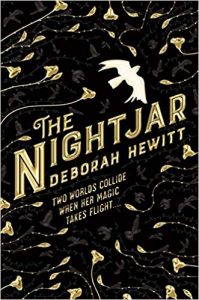 Deborah Hewitt’s debut, The Nightjar, intro­duces readers to an alternate London with a lot of dark promise. After a brief but brutal prologue, readers are introduced to the novel’s protagonist, Alice Wyndham, who is on the way to her deadly dull office job. Alice’s morning has been shaken up with an unexpected package delivery and then the appearance on the bus of a chatty older lady who suddenly dies nearly in Alice’s arms. In short order a mystery man named Crowley appears at her job, insisting he was sent to rescue her from impending doom, and then that night Alice’s best friend is hit and nearly killed by a car as Alice fights off a kidnapper. Before she knows it, Alice has escaped with Crowley through a Narnia-like doorway to “the Rookery.” This is the other London, still sporting pre-WWII archi­tecture and rife with magic. Alice, apparently, belongs in the Rookery and that is why her life is now officially turned upside down.

There is a lot about The Nightjar to capture reader interest. In the Rookery, Alice discovers she is an aviarist and thus capable of seeing peo­ple’s nightjars, the birds that physically embody their souls and are attached to them from birth. Determined to find a way to save her friend Jen, left in a coma back in the “real world” by the accident, Alice must track down Jen’s nightjar, which abandoned her as she hovers near death. In pursuit of it, Alice encounters the Rookery’s version of the police, an apocalyptic cult led by a death-obsessed leader, and visits a library with murderous fireflies. (They are as awesome as you would expect.) She also makes some new friends, all with intriguing backstories of their own, and inches ever closer to understanding why Crowley is determined to save her and why there is an organization in her London that is doing everything it can to see her dead.

The Rookery is a lot of fun and while Hewitt makes a nod or two in the direction of some clas­sics (nightjars are not dissimilar to daemons), and her infectious joy in creating this different London is impossible to resist. The problem is that Alice moves from being startled and terri­fied by the initial turn her life has taken (totally understandable) to the person who makes the worse choice at every single opportunity. The plot turns repeatedly on her bad decisions, some of which are truly inexplicable. Her romance with Crowley is also disappointing, not because it doesn’t fit logistically into the story, but because Hewitt doesn’t provide enough chemistry to make them a believable couple. Indeed, there is no reason to think either one of these characters has any great love for the other, other than to serve as the necessary relationship that the novel apparently requires.

The Nightjar is a debut that will, hopefully, lead to a more assured sequel. After a bloody few final pages that seem designed more for shock and awe than anything else, everything is set for another confrontation with the villains. There is plenty of room for some of the interesting side characters to have a chance to shine in a future book, and Hewitt has just barely scratched the surface of what the Rookery has to offer. Readers will certainly be interested in what she does next.

Gary K. Wolfe Reviews Creatures of Will and Temper by Molly Tanzer