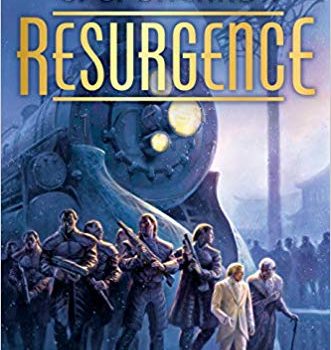 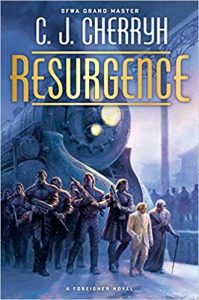 A quarter-century and 20 volumes into a long-running series, it’s hard to figure the exact audience to address in a review of the newest, Resurgence. When C.J. Cherryh’s Foreigner sequence began in 1994, it looked like it might have been the start of a mere trilogy. Over the last 25 years, it has become a string of trilo­gies – six and two-thirds of them now – that constitute a single continuous narrative with an ever-expanding cast, complicated relationships, and settings that stretch across landscapes and light-years. That’s a lot of story and character development and background to keep track of, and the theoretical ideal reader will have had a long-running start to fully enjoy each new entry, let alone Number Twenty. So I can (and hereby do) make my now-standard recommendation to newcomers: find an entry point (ideally, Foreigner itself) and start the long, satisfying journey – though in this case, the triad that begins with the tenth volume, Conspirator (2009), would serve pretty well, for reasons to be revealed below.

All the same, I can’t resist the opportunity to make a few remarks on how Cherryh is de­veloping this grand project, which manages to maintain its essential pleasures without merely repeating itself. Resurgence begins with a half-dozen pages of exposition that frame both the recent and deeper history of the series’ story line: how a shipload of lost humans came to make the world of the deceptively human-appearing atevi their home, despite near-disastrous initial misunderstandings on both sides; how, two centuries later, the brilliant atevi Tabini (head of a major regional govern­ment) and the gifted human translator-diplomat (“paihdi”) Bren Cameron and their allies have managed a series of crises that include a second contact with lost humans, first contact with a powerful neighboring alien civilization, and various political upsets, including an atevi coup and civil war.

Thereafter we get to the meat of the book, with Bren again involved in one of the long-term projects of Tabini’s grandmother, the far-sighted, fearless, independent, and generally unstoppable dowager Ilisidi. Once more Bren finds himself dealing with the very able, ambitious, and dan­gerous lord Machigi, once an opponent but now a possible stabilizing figure in his turbulent region, the Marid, a wild-west kind of territory occupied by clans who have long resisted integration into the coalition led by Tabini and who are in constant conflict among themselves. The story’s emphasis is on negotiations among the atevi to settle matters tied to their interests and conflicts, the geopolitics and economics and ethno-cultural tensions of their world, rather than their issues with the human population.

The roots of events in this volume go back to Betrayer (2011, the climax of the Conspirator triad), which introduced Machigi and examined the complicated, hazardous dance that is the career of an atevi lord. Machigi established a strained but stable connection with the dowager and Bren, and now his troublesome neighbors (where “troublesome” can mean “intending murder and usurpation”) have him looking to reinforce that association. Possible new projects face issues at the intersections of transport infrastructure, trade, and regional/clan rivalries and feuds (some going back centuries), and Ilisidi drafts Bren into the craft­ing of a multilateral agreement that can serve her long-view plans for those parts of the atevi world not yet knitted into her grandson’s association.

Most of the novel consists of scenes of formal and informal social interaction and technical debate, as the parties hash out whose economic interests and clan connections are affected by various infrastructure and trade rearrangements: how such changes might destabilize or settle down factional rivalries and alliances, where there might be hidden agendas or trapdoors waiting for the unwary. It’s a bit inside-baseball in its details, but the project also takes Bren and the reader to previously unseen parts of the world and culture, since, for strategic and security reasons, the meet­ings are held in the remote, mountainous territory of a provincial clan, folk who have never expected the attention of the great powers of their world, let alone ever seen a human. The visit affords a view into the atevi past as well as the geographi­cal hinterlands.

The other side of the book follows a quite different set of negotiations and another of the series’ continuing pleasures: watching Tabini’s nine-year-old heir, Cajeiri, continue to grow up, as he bears down on his responsibilities, determined to earn the respect of his father and maintain his connections to Bren, Ilisidi, and his human as­sociates, to build a relationship with his difficult mother – and even to do right by his obstreperous pet, the monkey-like Boji, who, like his master, is impatient of cages and restraints.

Cajeiri’s struggles are psychological, familial, and decidedly non-violent, but in the final chap­ter, Bren’s attention is forced from diplomatic-technical negotiations to a familiar mode of atevi conflict resolution, thanks to the appearance of players whose agendas (simmering since before Betrayer) are carried out via ambush and gunplay. This is the kind of extended story-arc that makes the series feel like one very long novel, rather than a series of episodes – there is no single resolution, but the sense that every apparent ending is going to generate another situation to understand and navigate. When the smoke clears, tea is served, bullet holes are patched, and Boji is re-homed; there will certainly be more intrigues to untangle and loyalties to realign. One looks forward to it.

Paul Di Filippo Reviews The Best of the Best Horror of the Year, Edited by Ellen Datlow