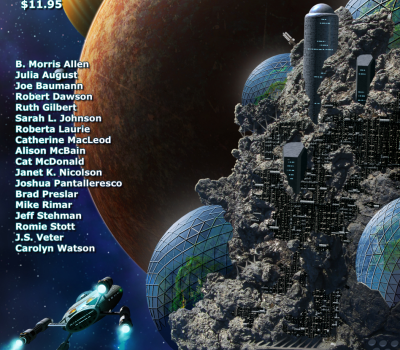 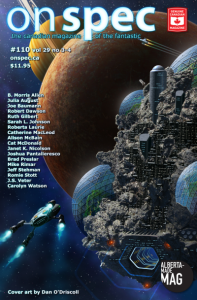 I found that I enjoyed several stories in the last issue of Asimov’s for 2019 by, well, men of roughly my age, let’s just say. “Escape from Sanctuary” is Allen M. Steele‘s latest tale of the human settlement on the planet Tawcety and its fraught relationship with the doglike rulers of the planet. Crowe and his young friend Philip are in jail… but before long they are freed and soon after are in the hands of an outlaw gang, looking for a way to reunite Philip with his wife – which may end up taking them off Sanctuary, the only place humans are allowed. Fun and fast-moving adventure. James Van Pelt offers “SeeApp“, a surprisingly affecting story of a janitor in a Colo­rado high school who realizes that his phone’s new application is alerting him to dangers in the school – including a couple of guns, which of course raises echoes of Columbine (and too many other school shootings). The resolution is all about character, however – that of the janitor, a new student he meets, and a troubled teacher, to say nothing of the mountain lion. Ray Nayler (who, I’m sure, is rather younger than I) offers “The Disintegration Loops“, set after a slightly alternate WWII in which the US gained some tech from a crashed flying saucer, including the title device, which allows the protagonist, Sylvia, to relive the memories of a dead person, with increasing uncertainty. Sylvia’s latest assignment is a suspected Russian spy, but the story concerns the compromised morality of all sides.

James Patrick Kelly, in “Selfless“, portrays the boss of a pulp museum, who is also the son of an imperious but dying woman, and husband to a fine man, father to a great kid. None of these are his Selves, really: he seems to have been forced into a scary sort of dissociation as a bullied child, and takes on different personae. One of them is called Hunter, which points to a potential hor­ror story, but then a “hunt” ends unexpectedly, and suggests a couple of possibilities – a larger community of people like him, or – something like redemption, maybe. The best story here, one of the best of the year, perhaps, is “Cloud“, by Michael Swanwick, about Wolfgang and his first meeting with his fiancée’s intimidating family. It’s a striking, really rather breathtaking look at the super rich, with the metaphor/reality of the Cloud on which they living working very well.

In the November-December Analog Marissa Lingen contributes a strong, well-grounded story, “Filaments of Hope“, about Lif, who has been planning to go to Mars as long as they’ve been able to. Left at loose ends when the mission is canceled, they visit relatives in Iceland and find, perhaps, that what they’ve learned about adapt­ing to Mars has meaning on this ever-changing, ever-challenging world. It’s a quiet story, with no bombshells: just solid and believable characters. Mark W. Tiedemann’s “Follow, Past Meridian” is another quiet character story, though with a distinctly SFnal, if somewhat mysterious, set­ting. Terik is a 14 year old in what seems perhaps a post-apocalyptic future, embarking on his “Forage”, a sort of coming-of-age ritual, with two of his friends. They wander in the direction of Gatepost, the city at the limit of their range, and wonder if they might see an American. One of the small mysteries here is precisely what an American is, as the trio meet a strange woman also heading to Gatepost and Terik’s coming of age takes a different turn. Nothing is explained, much is hinted, and the story subtly limns an interesting future. Also quiet and effective and making a neat and subtle point is “Empty Box“, by Allison Mulvihill, in which Harry gets a call from his friend Eliza, whom he only knows online, though he’d like to meet her IRL. She wants him to watch a debate/contest between two online avatars, one apparently a human, the other an AI. The idea is to decide which is which. (So, yes, Eliza’s name might be significant – or not!) It’s quite lovely how the story presents its argu­ment – or question – and leaves it for the reader to unpack. Another story dealing effectively with ideas of digital identity, from a much different angle, is “Binary“, by Rajan Khanna, in which an instantiation of a woman is created in a distant system to help the ship’s AI explore a mysteri­ous object. She misses her wife – and envies her “real” self back home, and wonders about some gaps in her memory, and – well, there are surprises here, all in service of really intriguing questions. I also really liked Craig DeLancey‘s “Sojourner“, yet another examination of the nature of AI, and AI rights, as a young woman in recruited to the new Underground Railroad to save an AI from federal agents who want to se­quester it. She runs to a safe house… but when she is eventually caught, her captors have questions for her, uncomfortable questions. The somewhat ambiguous implications on offer are quite dark, and very interesting.

There’s lots more good stuff here – this is a particularly strong issue of Analog. A couple of stories are pretty straightforward reworkings of familiar ideas, but are quite well done. Louis Evans‘s “The Prince of Svalbard: A Saga of the Thaw” had me thinking of Poul Anderson, as it’s told in a faux-Norse voice, depicting the heroism of a man in a far future, evidently after climate change has done its worst, who discovers a “castle” from the far past, and are shocked to learn its purpose. Edward Ashton‘s “Wolves” is about the aftermath of superpowerful aliens conquering Earth and enslaving humanity. One such slave encounters a free human and realizes he must kill her to save himself – but will he? Ashton’s resolution is clever and powerful. Jay O’Connell‘s novella, “You Must Remember This“, is nice work too, about a woman restored to life some years after the AI “Zeitgeist” took over the world (benignly). She’s given a chance to shake her addictions and make a better life – and after encountering the man who paid for her resurrection (for unexpected reasons), and reuniting with her brother, as well as finding an unexpected career, she finds a (somewhat typi­cally Analogish) purpose in life.

On Spec #110 is a double issue. I greatly enjoyed Julia August‘s series of vignettes collectively called “The Care and Conservation of Un­usual Properties“, in which various items of a magical nature are discussed by a curator or librarian who explains, sometime mordantly, what’s being viewed or perhaps cleaned… there might be some danger! And “Mnemosyne“, by Catherine MacLeod, is first-rate. The title refers to the narrator, who goes by Syne, and who is sort of a ghost catcher. She sells the ghosts – they’re too dangerous to keep in her head and there is a market for them – but her latest client, her former lover Aidan, is unexpected. We learn in flashbacks something of their history; and we meet Aidan’s wife, and then the ghost buyer. The story snaps shut quite delightfully.

The Autumn 2019 issue of the UK “little magazine” Popshot Quarterly is subtitled “The Fantasy Issue”. This is a very attractively produced, lavishly illus­trated publication. The stories tend to be quite short, even those not labeled “Flash.” I wasn’t bowled over by any of them, but there is some decent work here. “For the Splendour with Which She Shines” by Jen Lua Allan is told by the roommate of Aoife, who is a prophet. Aoife’s gift is, as usual, no gift, and it makes some of those she tells the future to quite angry, and even more so the people whom she hasn’t warned of danger. This can only end sadly – the more so for her roommate, who falls for Aoife, despite warnings. It’s well written and intense work. Daniel Wigham‘s “The Wind Feels Loss” is fine work too, about a girl saved, at a cost to a djinn, who feels compelled to offer her life to the djinn. What that creature makes of her life is the burden of the story. Rowena Fishwick‘s “The Change” is a nice, honest, depiction of a young woman coming to terms with her transition to a mermaid.

New Margo Lanagan is always good to have. Stray Bats is a collection of very short stories – vignettes really – mostly inspired by work of a number of Australian women poets. Some of the stories are essentially prose poems, some are short, sharp tales. I looked at a few of the original poems and the correct word is “inspired” – one can see the allusions to the poems’ imagery and themes in Lanagan’s stories, but much transformed, usually taking a mundane image and building a little piece of fantastika from it. It’s hard to name particular favorites among these tiny pieces – “Foxwife” is a good one, about an ordinary housewife who can become a fox – but there are mundane costs to that. Another favorite is “Dragon“, a fairly simple portrayal of the butchering of a newly killed dragon, with a bit of a sting to its tail.