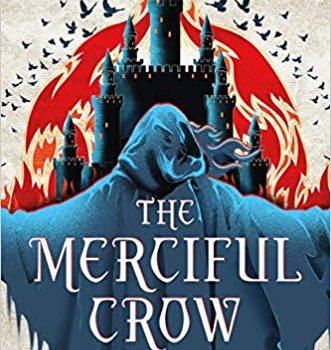 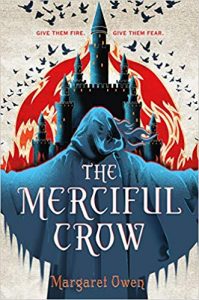 In The Merciful Crow, the first book of her new series, Margaret Owen introduces a world that is both familiar (distracted king ignoring his duties, ambitious second queen who wants her young son to rule, crown prince who is the target of his murderous stepmother, faithful best friend determined to save prince, many many unhappy subjects, etc., etc.) and packed with a ton (!) of story elements that readers will never have seen before. The Merciful Crow should be front and center for any class on worldbuilding, as Owen has done some quite impressive things on that front. (Teeth with power. TEETH.) In all the respects that matter though, this novel is a classic fantasy adventure that shows just how much a talented author can accomplish with a big enough imagination and the writing chops to back it up.

Fie is a Crow, the lowest of castes in Sabor. They are permitted to live on the fringes of so­ciety due to an inborn plague protection. When the disease claims a victim, a band of nomadic Crows are alerted via burning beacon to come to the location and take the body (or bodies) away for cremation so the plague does not spread. If the victim is still alive, then the Crows provide a quick death – the “mercy” alluded to in the book’s title. Throughout their lives, the Crows are denigrated and even murdered by those who cannot abide their plague immunity, or simply find their mere exis­tence distasteful. At the very least, the Crows and the abuses they suffer are ignored. Fie knows that the generational prejudice against her people has been impossible to change, but as a future chief and increasingly powerful witch she can barely stand it. Then Sabor’s prince and his bodyguard die from the plague and her band is called to take the bod­ies. In a bold moment, Fie demands great payment from the queen for such responsibility and obtains it: the teeth of long dead Phoenix dynasties, teeth that have been stored for eons and never collected. Teeth are the greatest price that Crows can demand for their work and are great magic in Sabor. By her successful demand for them, Fie marks herself as someone the fearsome queen will not allow to live.

Oh – and the prince and his friend have faked their own deaths and Fie’s chief secretly agrees to help them and as soon as they leave the city the entire Crow band becomes complicit in this crime, and thus the queen soon has a bunch of soldiers and witches and undead monsters after the lot of them. So Fie has to get her act together. Fast. (There is also a cat in the story and the cat does not die and is quite fabulous.)

The Merciful Crow has all the action and in­trigue readers could want. Crown Prince Jasimir and his guard, Tavin, prove to have a lot more depth than many in their positions (Owen does not dismiss them as spoiled or stupid, which would have been the easy authorial way out), and they are forced, just like Fie, to roll with dozens of plot punches as the relentless bad guys close in. This is not just a novel about running for safety, though. Both good guys and bad find different reckonings along the way as frustrations over life in Sabor bubble to the surface. This is a land that has been barely holding itself together, and Jasimir’s bid to live – his refusal to be quietly murdered – is the spark that sets multiple fires. Fie’s is the greatest; she is literally the worst and best person to have been present as the entire escapade begins. Fie’s faithfulness to her fellow Crows, and the task she has shouldered since birth, coupled with her burgeoning power make her a force no one could have predicted. And yes, there is a romance in this novel (how could there not be?) but Owen patiently lets it unfold with a build-up and payoff that read­ers will love. All in all, from Rich Deas’ stunning cover design to the interior maps and the extent of Owen’s world-building, The Merciful Crow is a first book in a series that most certainly will garner much attention.