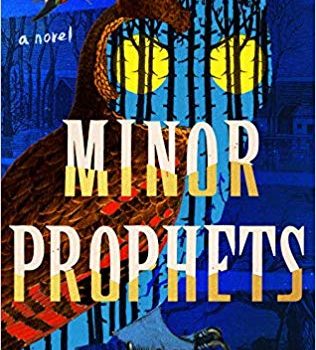 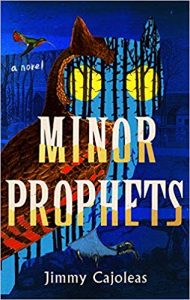 Minor Prophets by Jimmy Cajoleas is presented as a thriller with slight supernatural elements. In the opening pages, teen Lee recounts how he has long suffered from prophetic visions, many of which have come true. One of those visions strikes hard after his mother and stepfather have a loud fight and she roars off in her car, declaring, “This ends now.” By page four Lee knows his mother is dead and he and his sister Murphy immediately suspect their stepfather, suspicions borne out by discover­ies made after the funeral. The siblings steal his car and hit the road in search of safety with their long-estranged grandmother in Louisiana. That is Minor Prophets, except for the longtime vision of a disturbed man that terrifies Lee, the ghost of their long-lost uncle who shows up at Grandma’s, the slow realization of just why their mother and grandmother were estranged in the first place and why the fine folks of Benign LA are really happy to meet Lee. Be afraid, Lee and Murphy. Be very afraid.

Lee’s visions have the power to inspire people, if he can translate them effectively. Unexpectedly (again, be afraid) Grandma knows about the vi­sions and is intent on Lee embracing his power. It all seems great to Lee, because who wouldn’t want to be a source of devotion and inspiration? The ghostly uncle then shows up to tell Lee how to better inspire the eager townspeople, Grandma wants to get the family farm ready to host visi­tors, and the local police promise to keep Lee and Murphy safe from their murderous stepfather (and look into the death of their mother).

If only Murphy would just chill out and stop saying everything is freaky and weird about Grandma, and then Lee finds out that it is all freaky and weird. Apparently, they need a human sacrifice to make the visions work for the eager followers, so Lee needs to get himself ready for that. (Can anyone really prepare to sacrifice a human? I’m thinking no.)

Jimmy Cajoleas does a great job of taking read­ers through the twists and turns of Minor Proph­ets, slowly pulling the rug out from underneath them as the narrative unfolds. The grandmother provides equal parts security and horror, leaving Lee and Murphy almost immediately in a near constant state of paranoia. Should they stay or should they go? Should Lee embrace the power of the visions or deny them? And what really hap­pened the night their mother died? Who are the villains and who are the heroes and what exactly are Lee’s visions worth? If they make so many people happy, are they really bad? And here’s the biggest question of all: why do the residents of Benign need Lee’s visions so much? Why can’t people think for themselves and find their own happiness?

What makes Minor Prophets so downright terrifying is that it is all completely believable. Yes, there is a ghost, there are visions, and maybe that is not possible, but the rest… the parts where people gravitate to someone who promises to fix everything and make their lives wonderful, and are willing to do whatever that person com­mands them to do? History has proven more than once how dangerously true that scenario can be. Cajoleas has his pulse on the dark horrors of the modern world, and he brings them home to teen readers with a story that will stay with them to the final page. (Also, thank heavens for smart little sisters like Murphy who don’t take crap!)