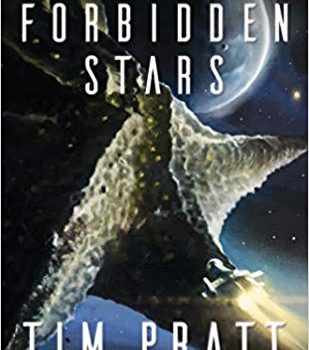 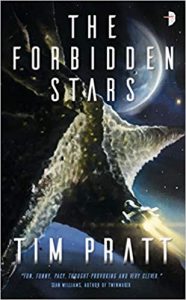 Tim Pratt’s Axiom novels (The Wrong Stars, The Dreaming Stars, and now The Forbidden Stars) have delighted me since almost the first chapter of the first book, back in 2017. They’re a very modern iteration of action-heavy pulp, with appealing characters and worldbuilding that hints at more depth than we have the chance to see. A plucky crew of misfits stumbles onto a threat to all human life and shenanigans ensue. So when The Forbidden Stars landed on my desk, my first reaction was very close to unfettered joy.

My second reaction was dismay, for The Forbidden Stars may well be the final volume in the Axiom series. That’s not to say it’s a bad concluding volume – far from it! – merely that I’m disappointed it had to make moves towards wrapping things up at all.

As The Forbidden Stars opens, Callie and the crew of the White Raven are checking out (breaking into and blowing up) an Axiom facility that their mysterious informant – an individual who refers to himself, not at all omi­nously, as “the Benefactor,” and who definitely for sure doesn’t have an agenda of his own – has told them about. This facility – defended fiercely by the alien Liars who still serve the memory of the long-disappeared, genocidal, potentially universe-endingly powerful Axiom – is home to a weird transdimensional key, and Callie’s engineer Ashok gets hold of a trans­portation device that brings them to the place the key opens….

They decide they’re better off not opening it. It’s an Axiom thing, and who knows, it could unleash a weapon that destroys the uni­verse. Instead, they put these two components somewhere safe. As safe as they can make it, anyway. Which, when the Benefactor contacts them again – in the person of an AI drone called Kaustikos – to point them at the Vanir system, from which no traffic has emerged in about a hundred years, may turn out to be not that very safe at all.

The crew of the White Raven – Callie, Callie’s lover (and executive officer and medical officer) Elena, engineer Ashok, AI Shall, and piloting team Drake and Janice, as well as their ally, the rogue ex-Axiom-cult Liar Lantern – suspect that it’s a trap. But most of them are the kind of people who’d rather go spring an interesting trap than wait around in boring safety, so it’s off to the Vanir system for them.

They don’t arrive as they expect to. They’re bounced out of their own personal wormhole by the system’s unexpected defences, where they’re met by a ship – a hostile ship – that Lantern identifies as a scourge-ship, one of the ships that the Axiom once sent out to destroy worlds and eradicate sapient life. But when they manage to disable it, they discover its (now-dead) pilot looks human – human with alien limb grafts and weird internal organs. Something extremely peculiar and very disturbing is going on in the Vanir system. It’s being run by Liars – with a certain amount of human co-operation – who’re really into experimenting on sentient beings. Mostly humans: they’re interested in Callie and her crew as potentially useful new genetic material. There’s a resistance movement in the system, and the crew of the White Raven find themselves unwilling to not do everything they can in order to make sure that the weird non­consensual hybridisation doesn’t keep going.

Callie becomes pretty much single-handedly (along with her crew) responsible for overthrow­ing the system’s administration, which turns out to be mostly composed of the Axiom-worship­ping kind of Liar in the higher echelons. And there’s an Axiom facility in the system. Things could get even more complicated.

They do. And then they get still more compli­cated – and gut-wrenching – when the so-called Benefactor shows his true colours, and the transdimensional key from the beginning makes a second appearance, complete with the vault it opens, marked Open on the last day of the war.

The Forbidden Stars does many of the things I loved about its predecessors: the fast, frequently entertaining banter, the high-stakes action, the ever-escalating problems and the sheer panache and competence with which the protagonists address those problems. But it doesn’t spend as much time on character development or personal considerations as the preceding two volumes, which makes it feel a little shallower than The Wrong Stars and The Dreaming Stars. I like explosive fast-paced space opera pulp. (I like it a whole hell of a lot, and I’d prefer that there should be much more available that shares in the Axiom series’ modern and queer-friendly sensibilities.) Much as I like it, though, I like it a lot better when it spends some of its time on its characters’ growth and change. 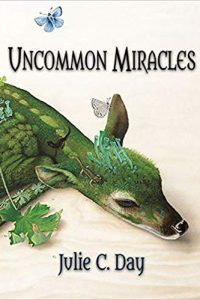 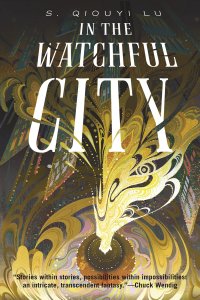