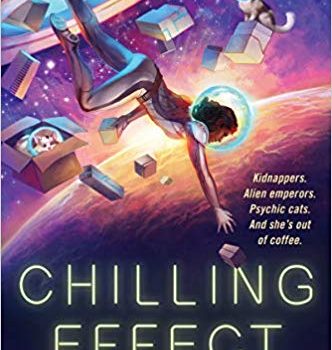 I met Valerie Valdes briefly at the Dublin 2019 Worldcon. Part of me wishes I’d already read Chilling Effect, her debut space opera novel, at that point, because I’d like to ask how many of the little things that look like nods to Mass Effect and the likes of Star Trek: Deep Space Nine are there on purpose, and how many are the product of a shared cultural moment and shared sensibilities.

Captain Eva Innocente has a ship, La Sirena Negra, and a small crew. Her cargoes are small and her profits even smaller, ever since she broke with her not-exactly-all-aboveboard father and the crew of smugglers and mercenaries she used to run with. (Eva Innocente has a Dark Past, but unlike so many of literature’s Dark Pasts, it’s not lovingly dwelled on and brooded over – it’s only mentioned occasionally as explanation for some of her skills and attitudes.)

Things are going reasonably well for Cap­tain Eva until her sister Mari is kidnapped by a mysterious and largely mythical criminal syndicate known as The Fridge, which holds people hostage in cryosleep until their ransom is paid, or until the poor schmucks who value the kidnapped person have gotten themselves killed doing The Fridge’s dirty work. The Fridge wants Eva to do their dirty work this time: she has both the skills and the motivation, since she loves her sister.

Unfortunately, Eva also has a knack for at­tracting trouble. An encounter in a bar (where she turned a rich bloke’s proposition down with added punching) means that a deeply unpleasant (but powerful) emperor is pursuing her with all the might at his disposal, and a violent disre­gard for civilian casualties, in order to forcibly add her to his harem. Her ship has been partly colonised by psychic cats, and she’s falling in love with her engineer, a state of affairs that’s ap­parently quite mutual, while lying to her whole crew (including said engineer) about what’s going on while she tries to work out how to pay off The Fridge. Lies aren’t a very good basis for relationships of trust, and her crew begins to suspect something’s wrong.

Then The Fridge instructs her to do something that completely violates her personal ethics. Eva refuses to do it and starts to fight back, but her penchant for attracting trouble is hard at work. She ends up kidnapped herself, spends a year in cryosleep – and when she wakes up, she learns nothing about her sister was what she thought, that her sister betrayed her in the first place, that her engineer-maybe-lover Vakar has disappeared, her shitty dad has her ship, her crew have dispersed, and The Fridge are messing around with ancient alien technology that might be terribly dangerous.

Eva wants her ship back. And her life back. And maybe to apologise to a few people and find Vakar and apologise to him. And also, just maybe, to ruin someone else’s day. The last fifth or so of the novel is dedicated to Eva owning her shit, getting the band back together, and showing The Fridge and her sister (and a certain rape-tastic emperor) why they probably shouldn’t have screwed with her in the first place.

In its way, Chilling Effect is just as delight­fully pulpy as Pratt’s Axiom series, and it involves nearly as many explosions. (Eva maybe gets a bit more character development packed into a single novel than some of the protagonists of the Axiom series, mind you.) Set in a large universe filled with many different intelligent alien species, it has a broad canvas for its action, and one that hints at more than the reader sees directly. (It feels big and detailed, but not heavy on the infodump. And it acknowledges that queer people exist and have families, so that’s pleasing to me personally.) The crew of La Sirena Negra, apart from Eva and Va­kar, are lightly but deftly sketched. They feel like individuals with lives and concerns of their own. (Vakar gets a little more attention.)

Eva, as befits the protagonist and viewpoint character, gets the most attention. She’s a cocky asshole, but she’s an appealing cocky asshole, one with a sense of compassion, ethics (even when she’s crossing a whole lot of lines she promised herself she wouldn’t cross), and the competence to back up (most) of her cockiness. And she grows and changes throughout the book – not necessarily always in the ways one might expect.

Where Chilling Effect excels, though, is in its voice and its sense of humour. It’s got a downright compelling voice to go along with its interesting cast, and a gift for enlivening its action with humour. It’s funny without being comical or ridicu­lous, and it’s not afraid to poke fun at its characters when appropriate.

Also, it has space cats.

This is a self-contained novel that holds out the possibility of more stories in this setting. It’s a talented debut: I enjoyed it a hell of a lot, and I confess to looking forward to seeing what Valdes does next.