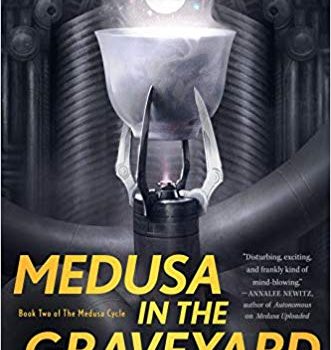 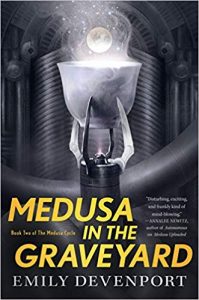 The first book in Emily Devenport’s Medusa Cycle, Medusa Uploaded, introduced an intriguing science fiction universe, a society with a complex and lay­ered social structure, and a grandiose, unfathomable pantheon, but it limited the narrator and antihero Oichi Angelis to stepping-stone motivations, mostly espionage and murder. Medusa in the Graveyard, the second volume, grants Oichi diplomatic respon­sibilities and lengthy quests, and it uses character conflict to add well-earned tension to the narrative as a whole. It still relies on strangely flimsy ideas – for instance, the absurd “Minis,” which resemble sentient toys and are given extensive dialogue and scenes, or continual musical references to commu­nicate Oichi’s mood and refinement. But the second book improves on the first by giving the characters more humanity and by extending the plot objectives.

The Medusa Cycle is a space opera with the scope and slickness of the Mass Effect video games. The characters mostly reside on Olympia, an enormous spaceship slowly coasting toward a to-be-colonized world and equipped with almost unlimited technol­ogy. Life on the ship was once strictly regimented by clans and social groups (like upper-class Europeans in the 19th century), but Oichi overturned all that in Medusa Uploaded. She also introduced Medusa units (AI symbiotes) to much of the population of Olympia and entangled herself with the alien Weapons Clan, as well as the Three, overwhelmingly powerful entities residing on Graveyard, a planet in a suspiciously familiar solar system. In Medusa in the Graveyard, Oichi must decide how much to involve herself with the Three, how much to listen to her Medusa unit, and how much power to accept.

The first half of the novel offers more information about life on Olympia after Oichi’s revolution, in­troduces newcomers to the ship, and essentially acts as setup for the second half, which is a well-paced, super-weird adventure quest on Graveyard. That quest is full of surprises, including riddles, messing around with time, gods and illusions, and a great deal of reasonably integrated exposition. Graveyard is so named because it’s where spaceships from past eras have gone to rest and disintegrate. The conscious­nesses of these ships remain:

These were not the tame ships whose parts were spread throughout Joe’s Salvage Yard. These were revenants from past ages, made by races long since decayed into dust. They did not tolerate salvage. If we got anything from them, it would be something they chose to give. If anyone stole from them, there would be a price to pay.

Perhaps it’s this journey that nudges Medusa in the Graveyard above its predecessor, because it’s unpredictable and unrepetitive enough to intrigue the reader through about 100 pages. The book also has a strong sense of cause and effect, of mistake and consequence, absent from the violence of the first novel. “I counted my mistakes like sheep,” Oichi notes at a crisis point. Her errors in judg­ment cost her an important relationship in this novel, something she can’t win back with guile or treachery. As a result, she’s close to being a real leader, rather than a guerilla, at the end of the book. “You can teach Ashur how to kill – or you can let him teach you how to live,” one character advises her. That choice, that character arc, tightens the book, makes it greater than the sum of its flashy, imaginative parts.

The book invokes a mixture of mythologies – Greek tragedy, Baba Yaga – to shore up its plot and ideas, but aspects of it ring a little bit false. Char Char­acters’ interest in late 20th- and early 21st-century films, for instance, when this novel reveals that 30 millennia may have since passed. The generic cheer and snark of Oichi’s narrative voice, when her actions paint her more like a contract killer with political ambition and major psychic damage. Plot movements occur so quickly, and in so many dimensions, that catching on and keeping up often requires rereading. Alternating this kind of nar­rative structure with the eerie, grand dimensions of the Three leaves the reader with whiplash. It’s as if Devenport has combined Rogue One with Lovecraft: heady, spooky, techy, cool, but difficult to get used to.

On the whole, the Medusa Cycle is unusual enough, particularly in the elaborate universe it builds, to attract readers with a penchant for complicated science fiction mixed with political and social intrigue. Should the pattern hold, the book that follows Medusa in the Graveyard will be better yet. For the moment, though, it feels like a series that has only just located its heart. 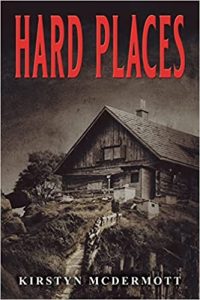