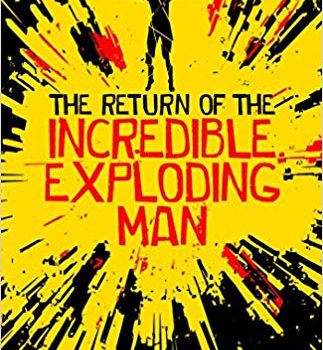 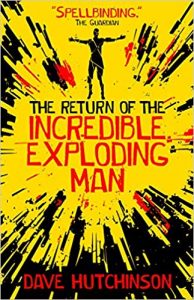 There are two things that should be noted up front about Dave Hutchinson’s The Return of the Incredible Exploding Man: first, as the title might suggest, it’s quite different in tone and scope from his acclaimed Fractured Europe sequence of novels; and second, despite what the title suggests, it’s not a sequel to his 2011 story “The Incredible Exploding Man” – and familiarity with that story might undermine one of the novel’s most dramatic shifts. For most of its length, the novel builds its suspense as an artfully paced corpo­rate paranoid thriller: a down-at-the-heels expat British journalist named Alex Dolan, while checking his piled-up mail, discovers that all of his debts have been paid by a tech billionaire, Stan Clayton, who wants to hire him to chronicle the development of the world’s largest privately funded supercollider in a remote Iowa town. Miffed by Clayton’s arrogance but intrigued by curiosity and the promise of solvency, he arrives in Iowa to discover that Clayton has essentially bought up the entire county around Sioux Crossing, including the dying town, which he has rebuilt from the ground up, directly or indirectly employing everyone who lives there. At first, Sioux Crossing seems to be an odd amalgam of a latter-day Los Alamos and a creepy Stepford, with most of the population cheerfully accepting the notion of being more or less owned by a billionaire’s pet project and only a couple of crusty local residents, such as the town’s newspaper publisher and a retired but once-famous novelist, expressing any suspicions about what might really be going on. To add to the paranoia, Dolan is recruited by a British intelligence agent, who is also convinced Deeds Are Afoot. More mysteries quickly arise: what happened to the couple who previously lived in Dolan’s new house, who are the mysterious figures who seem to be watching him, and why is the house occasionally plagued by static electricity and mysterious sparks?

That’s more than enough to keep us plowing through the first two-thirds of the novel, which only marginally approaches SF and seems to be leading us in something of a Michael Crichton direction, only with clearer prose and more in­teresting characters. After all, given what we al­ready know about science-geek tech billionaires – who tend toward utopian applied-engineering projects – why would Clayton spend billions sim­ply trying to outdo CERN in basic physics? It’s a question that haunts Dolan as well as us, and it seems to have also occurred to a project scientist named Wendy, who emerges as Dolan’s only real ally. We’re invited to explore questions about how readily a community is willing to sell itself to the promise of ersatz economic salvation, and the portrait that emerges of Sioux Crossing is the most compelling aspect of the novel.

But then, more than two-thirds of the way through the narrative, it either drives itself off a cliff or achieves liftoff, depending on how willing readers are to accept Hutchinson’s bold and somewhat playful strategy. To reveal almost anything about the last third of the novel might count as something of a spoiler, though anyone who read that earlier short story might feel a shock of recognition. Suffice to say that Hutchinson seems to be drawing on everything from classic SF paranoid fantasies like Dick’s Eye in the Sky to a waggish parody of superhero comics (there’s even a nod to the Incredible Hulk), combining surreal comedy with timeslips that cleverly echo the novel’s earlier chapters, shifting the comic tone which earlier had been largely a function of character into a kind of gonzo New Wave narrative experiment. If you approach the novel as essentially comic-inferno in tone from the beginning, it all adds up in a satisfying if surprising denouement, though readers who expect a Crichton-style shutdown and wrap-up might be disappointed in the risks Hutchinson chooses to take. From my perspec­tive, Hutchinson’s ambiguous resolution is more spectacular than convincing, but it’s finally quite a bit of fun.