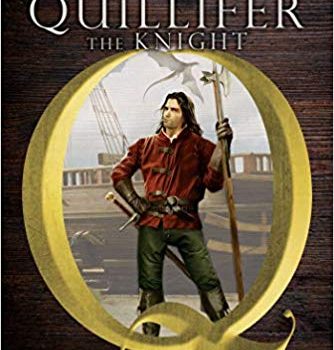 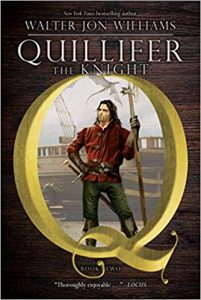 When Walter Jon Williams introduced us to his amorous and sometimes hapless hero Quillifer a couple of years ago, he was clearly and joy­ously celebrating the kind of essentially comic, faux-historical swashbucklers that date back as far as Rafael Sabatini and Anthony Hope and as recently as K.J. Parker. Like Hope and Parker, he sets his adventures in an imaginary nation, the kingdom of Duisland, that bears pointed resemblances to early Renaissance Europe but also gives Williams room to introduce a few dragons and pissed-off goddesses. With Quillifer the Knight, his lowborn hero – son of a butcher and a one-time law student – has found a place at court, but still finds himself surviving by his wits and occasional duplic­ity, still waggishly inventing new words on the spot, and still finding himself embroiled in both amorous intrigues and political machinations. What becomes clearer in this second volume is that he also shares some literary DNA not only with figures from historical fiction and fantasy, but with the science fiction that remains at the core of Williams’s considerable reputation. Not only is a brilliant woman astronomer one of the more intriguing minor characters (involved in a Galileo-like debate over what the newly invented telescope reveals about the cosmos), but Quillifer himself is above all a supercompetent tactician and problem-solver that Heinlein would have been proud to know.

For example, in one extended sequence involv­ing a quest to slay a dragon plaguing a nearby land, Quillifer’s companions, following the con­ventions of heroic romance, fail miserably until Quillifer approaches the problem (minor spoiler here) by using what amounts to tear gas and bal­listics. He is, in his own way, a harbinger of this world’s coming age of technology and commerce, and he knows how to do stuff. In addition to the lovingly detailed descriptions of lavish clothing and arcane weaponry, we get lessons on how to carve a ham, design stagecraft, build a canal, and make your own ink – as well as how to create a market for that ink and then cleverly manipulate supply lines in order to guarantee a monopoly for that market. When he finds himself cornered into boat races or duels – things he knows he’s not good at – he finds creative tricks to even the odds. Quillifer, in other words, is a future-oriented thinker in a culture trapped by its own traditions.

Except for that dragon, a few characters from a nonhuman golden-skinned race called the Aekoi, and that pissed-off goddess (whose advances Quillifer rejected back in the first volume), there isn’t a great deal of material fantasy in Quillifer the Knight, but there is a good deal of geography, and worldbuilding has become such an aesthetic of its own these days that many readers will hardly notice the restrained use of the fantastic. There is, however, a keen sense of a fully developed culture, including (all too rare in such historical fantasies) the arts and sciences as well as political structures and military tactics. Among the colorful cast of secondary characters are the singer Knott, who seems intent on turn­ing Quillifer’s feats into ballads that sometimes come back to haunt him, and the poet Blackwell, whose latest play has flopped and who needs a hit (which he finds by introducing political protest themes to the otherwise hidebound theater of the day). There are also figures who, like Quillifer himself, seem to presage a changing world – that woman astronomer Ransome, for example, or the inventive young engineer Mountmirail, who sometimes serves as Quillifer’s personal industrial revolution. Throughout Williams’s episodic and sometimes ramshackle plot, Quil­lifer himself emerges as the chief change agent of his world. As his faithful lover Mistress d’Altrey says to him, “No one has met anyone like you, and no one knows what to do with you.” Wil­liams knows exactly what to do with Quillifer, and it’s hugely entertaining. 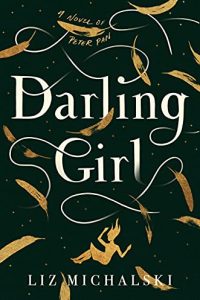