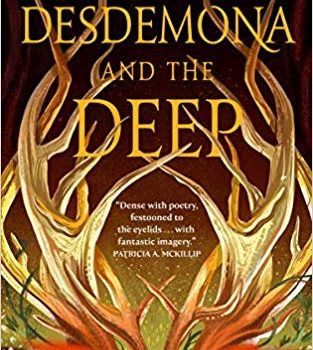 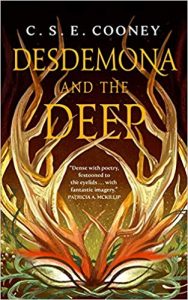 I’ve been looking forward to C.S.E. Cooney‘s Desdemona and the Deep for quite a while, and having arrived, it doesn’t disappoint. This is the third of her Breakers novellas (though it stands completely alone), centered around a set of houses called Breakers in three different worlds: the hu­man world, the world below, of the Gentry, and the deep world of the kobolds. Desdemona is the fashionable daughter of mining tycoon H.H. Man­nering, and we meet her and her best friend Chaz (who is a woman in a man’s body) at a charity function arranged by her mother. Desdemona is deeply bored and finally escapes home, where she happens to overhear her father arranging a deal with the King of the Kobolds, who seems none too happy. This clue leads her to realize something horrible when the next day there is a disaster at one of H.H.’s mines. Her father must be responsible, but how to make some sort of amends? Thus she ends up on a mission to find and free the daughter of the King of the Kobolds, and so she and Chaz end up traveling to both worlds below, where she and (and Chaz) not only save the worlds… but find their real selves. The best thing about this book is the prose – lush images and glorious words mix in a sometimes comic and sometimes earnest olio. The plot is hectic, but drags just a bit in places – but there is always the music of the writing, and the comic coloration, and the engaging and just awakening Desdemona to keep us entranced.

C.S.E. Cooney won the World Fantasy Award for her collection Bone Swans. She has a strong – even glittering – track record with short stories, but Desdemona and the Deep is her first book-length work.

Desdemona and the Deep is a really effective novella. At any other length, it would lose some­thing of its impact: shorter, and it would not have time to build up the momentum for its series of punches; longer, and the effect of its short, sharp, furious poetic dismantling of assumptions would be diluted away from its pointed achievement.

We first meet Desdemona, our eponymous protagonist, at a charity affair: a benefit for the factory girls with phossy jaw. Desdemona is the daughter of wealth, a frankly appalling degree of wealth, and her mother (estranged from Desde­mona’s contemptuous father) is a social reformer using that wealth to draw attention to the plight of the less fortunate. Desdemona lacks her mother’s fiery investment in the cause: the sight of the fac­tory girls in borrowed high-society gowns makes her feel a little disgusted. At the same charity affair, we’re introduced to her best friend Chaz, a high-society gentleman with similar levels of wealth and a preference for wearing dresses – though to call Chaz a gentleman is to lie about his true nature.

This opening, in Cooney’s elegant and po­etically atmospheric prose, introduces us to one world among three: Athe, the world of mortals, the Valwode, world of the gentrykind, and Bana, world of goblins. And it introduces us to a world kin to our early 20th century, rotten with all the ills of capitalism. That night, after the charity affair, Desdemona overhears her father compel­ling Kalos Kantzaros, Goblin King of Bana the Bone Kingdom, to help him get richer – as part of a bargain sealed by Desdemona’s ancestors, in the house where Desdemona was raised, which, legend has it, connects to the other two worlds. In order to cover up his bargain, which tithes several living men to the Bone Kingdom, Desdemona’s father arranges for the deaths of hundreds of his mine workers, who were only going to cause him trouble by unionising anyway.

When Desdemona sees the headline about the mine deaths, she’s overcome with fury (and a certain amount of guilt and self-disgust that she profits from her father’s absolute lack of morals). Her fury leads her to open a way between the worlds so that she may at least get the tithed men, if not the dead ones, back: a furious, desperate quest with her life, their lives, and the life of Chaz – fallen with her between the worlds, transformed now so that Chaz’s outer form reflects her inner truth – at stake. Desdemona too is transformed, a transformation that continues to affect her on her journey, and in her quest to save the lives of the tithed miners she must also save the realm of the Valwode from destruction, rescue the Bone King’s daughter, witness the marriage of her best friend, and decide once and for all whether she’s truly her father’s daughter – or her mother’s.

Desdemona and the Deep is an eloquent, elegant novella about power, art, consequence and change. It’s also pleasantly queer and drunk on language, which appealed to me deeply. I recommend it. 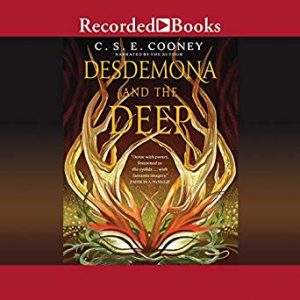 Spoiled and decadent young socialite Desdemona Mannering, the daughter of a ruthless industrial­ist and a driven social reformer, must determine what side she’s truly on when she discovers the source of the family wealth: a brutally exploited loophole in an ancient contract with the goblin king. During her journey through multiple worlds to make amends – and to rescue her best friend – she will discover the truth behind childhood myths, become involved in a royal power struggle, undergo more than one profound transformation, and find a meaningful life’s purpose.

Professional audiobook narrator Cooney (re­viewed previously in this column as an author/nar­rator contributor to Ellen Datlow’s Alice-themed anthology Mad Hatters and March Hares and the author/narrator of her own collection, The Bone Swans) reads her own tale with joy and confidence. She is delighted to tell you her story and you will be delighted to hear it. Cooney also does a great drunk voice, and some really fun character voices. I particularly liked the voice of the assistant to Desdemona’s mother; it reminded me a lot of Jane Horrocks’ character Bubble on Absolutely Fabulous, if Bubble were American and somewhat smarter.

These reviews and more like them in the October 2019 issue of Locus.