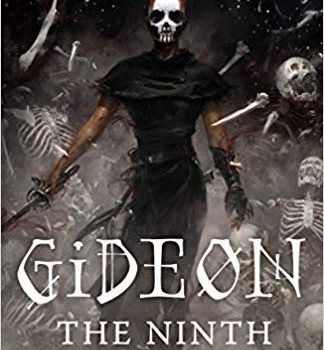 The Locus Bestsellers for December include top titles Gideon the Ninth by Tamsyn Muir (Tor.com Publishing); Oathbringer by Brandon Sanderson (Tor); To Be Taught, If Fortunate by Becky Chambers (Harper Voyager US); and Forgotten Realms: Boundless by R.A. Salvatore (Harper Voyager US).

Tamsyn Muir’s debut novel Gideon the Ninth, the first book in The Locked Tomb trilogy, captured first place on the hardcover list with a respectable lead over A Little Hatred by Joe Ambercrombie. Annalee Newitz’s novel The Future of Another Timeline (Tor) was the new runner-up. We had 44 nominated titles, down from 51 last month.

On the paperback list, Good Omens by Neil Gaiman & Terry Pratchett slid into second place, following Brandon Sanderson’s Oathbringer in first. The latest October Daye novel to appear in paperback, Night and Silence by Seanan McGuire, was our new runner-up. There were 56 titles nominated, up from last month’s 48.

Becky Chambers’s standalone novella To Be Taught, If Fortunate, jumped to the top of the trade paperback list, while The Three-Body Problem by Cixin Liu moved into second. There were no new runners-up. We had 73 titles nominated, up from 67 last month.

On our media and gaming-related books list, R.A. Salvatore’s new Forbid­den Realms book Boundless stormed the list with over twice as many votes as our second-place finisher Star Wars: Thrawn: Treason by Timothy Zahn. There were no new runners-up. We had 20 nominated titles, down from last month’s 24.

Matthew Hughes was born May 27, 1949 in Liverpool, England. His family emigrated to southern Ontario, Canada when he was five years old, and then moved to Vancouver when he was 13. He attended Simon Fraser Uni­versity but left school before graduating. He has worked various jobs, but spent most of his career as a freelance writer, including nearly 40 years as a speechwriter for various Canadian politicians and corporate