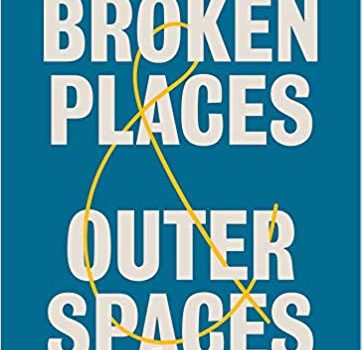 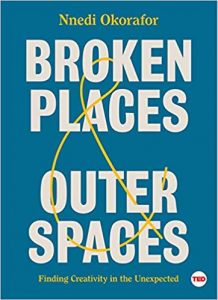 Nnedi Okorafor’s surprisingly and sometimes achingly personal account of her battle with sco­liosis and post-surgical paralysis, Broken Places & Outer Spaces, isn’t exactly a literary memoir, but one anecdote strikes me as ironically emblematic of her unique relationship with SF: when she was hospitalized, she was given an old paperback copy of Asimov’s I, Robot. It would be more than a decade before she actually read it, but she began scribbling in the margins, “around the printed words of Isaac Asimov” – not commenting on the stories, but rather beginning to invent stories of her own. Since then she’s had an almost meteoric career, still writing in the margins of traditional SF, adding her own voice and cultural perspective to a genre that used to know what its classics were supposed to be. She does men­tion some literary influences, mostly horror writers, and lists King & Straub’s The Talisman as an early favorite, but says she didn’t discover writers like Butler and Le Guin until her own writing career was well underway.

Mostly, though, she offers a heartfelt account of her childhood encounters with racism in a working-class suburb of Chicago (where her speed and strength became survival tools), her promising adolescent career as a tennis and track-and-field star, and the sudden end to that career due to the scoliosis which also plagued her siblings, though her own case was by far the worst. She calls this the Breaking, and suggests that it had a good deal to do with her self-discovery as a writer, as opposed to the entomologist she’d once hoped to be. She also briefly speculates that a similar sort of breaking might have influenced the careers of Frida Kahlo and Mary Shelley. What may be of more interest to Okorafor readers are bits that suggest her own later work. When she first learns of her paralysis, her rage is such that “The room should have looked like a tornado had ripped through it. Everyone’s hair should have been blown about. Some of the residents should have been dead, dashed violently against the battered walls.” It’s a stunning description of the power of anger and frustration, and we can see echoes of it in later scenes from Who Fears Death? to The Book of Phoenix. She describes writing a Marvel comic in which a disabled Nigerian girl “joins forces with an alien symbiotic organism to become a shape-shifting superhero”; “the strong will she uses to control the symbiote is one she developed while learning to live in a world in which she was disabled.” There are obviously a lot of additional factors that have shaped Okorafor’s career as a writer, and she alludes to several of them in passing, but Broken Places & Outer Spaces gives us a pretty good sense of where those determined and resourceful women in her fiction really came from. 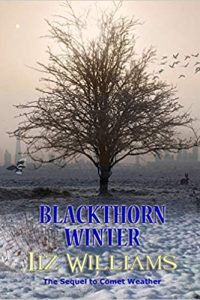