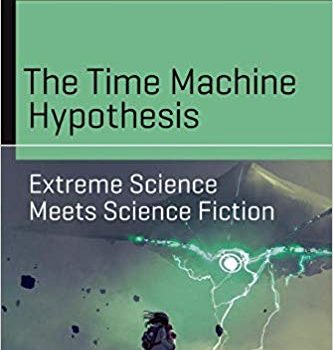 J. Richard Gott III’s epigraph in Damien Brod­erick’s engaging survey may contain a mission statement of sorts: “To appreciate what scientists are studying now, an excellent first step is to explore major time-travel themes in science fiction, where many ideas in this arena were first advanced.” Brod­erick undertakes this exploration with commendable adroitness and wit.

In the first Part of his volume, comprised of four chapters, Broderick probes modern science in an effort to answer the following question: “If time travel is feasible, not a breach of the established laws of physics, is it possible that we are already being observed by visitors from the future or even the past?” He offers three possible answers, and then attaches probabilistic weight to each as he covers the relevant science-based thinking. Unsurprisingly, these are physics-centric outings, offering solid lay coverage of dozens of ideas, from the early notion that “positrons could simply be represented as electrons going from the future to the past in a back section of their world lines,” to the history of black holes, to more complex proposals about traversable wormholes, “exotic matter,” extra-dimensional brane theory, and various paradoxes such as causal­ity loops. Broderick neatly summarizes key ideas and opinions by a notable cadre of scientists and writers, including Stephen Hawking, Paul J. Nahin, the aforementioned J. Richard Gott, Ronald Mallet, Sean Carroll, John G. Taylor, Robert L. Forward, Kip S. Thorne, Joe Polchinski, Fernando Echeverria, Gunnar Klinkhammer, Ulvi Yurtsever, John Wheeler, Richard Feynman, and Frank J. Tipler. He even refer­ences John G. Cramer’s Transactional Interpretation of quantum mechanics. The conclusion seems to be that according to our deepest contemporary theories about how the cosmos operates, “time travel is not impossible, just very, very difficult.” I found these chapters engrossing and measured. My only gripe is that I feel Broderick is too soft on the pseudoscience of psychic phenomena. His finding that “faint but cumulatively impressive evidence” exists for the claim “that the human mind itself can breach the accepted limitations of entropic space and time” failed to convince this particular reader.

Next, we arrive at what most SF readers will prob­ably consider the book’s core: a diligent overview of some 50 time-travel related works of fiction, from H.G. Wells’s seminal The Time Machine (1895) all the way through Gregory Benford’s recent Re­write: Loops in the Timescape (2019). Broderick wisely uses the chronological arrangement of these book discussions to show how specific twists on time travel are recomplicated or in some cases de­constructed by successive generations of authors. These conceptual ties are necessary to give these mini-essays cohesion; the strategy is successful, but I could have used even more linkage. I applaud Broderick for the scope of his commentary, which runs the gamut from writers like Murray Leinster, Jack Williamson, C.L. Moore, Henry Kuttner, T.L. Sherred, Clifford Simak, to Ward Moore, James Blish, Andre Norton, John Brunner, Michael Moor­cock, Wilson Tucker, Marge Piercy, Connie Willis, and less obviously traditional candidates such as John Fowles, Martin Amis, Audrey Niffenegger, Claire North, and Joyce Carol Oates. Broderick’s comments on the relationships with and attitudes towards SF by non-SF writers are often eloquent and grounding, e.g. “Oates and other newcomers to this mode of invention are laboriously reinventing the basics, or failing to do so.”

Time and again, Broderick proves himself a sprightly and knowledgeable tour guide, who ap­portions clear summaries of the stories under his temporal lens. Most of these capsule pieces are structured in the same way: a few biographical lines to place the author in context and adduce the importance of this particular story to the time travel sub-genre, a succinct evaluation of the story’s liter­ary qualities or lack thereof, and a recapitulation of the plot, peppered with quotes that illustrate its style and major ideas. Be forewarned: he often gives away the last paragraphs and lines of stories and novels, quoting them verbatim.

My interest in the story discussions was roughly proportional to my interest in the particular narratives themselves, with Broderick acting as an amiable host who is enthusiastic but never pushy, letting the material speak for itself. He dusts off gems worth revisiting and points us to non-genre reads we ought to seek out, highlighting complementary rather than competitive readings. Broderick occasionally interjects autobiographically, which enlivens his task, by contrasting his changing perspectives on a story – how apposite – over a period of time. He says, for instance, about James Blish’s “Beep”: “Reading this at age 14 or so, more than half a century ago, I found it wondrous in the extreme. Despite a strong suspicion these days that Blish was flummoxing me at every turn I still find cognitive breakthroughs or paradigm breaches enthralling.” In other instances he acknowledges that what once shone with wondrous luster is now riven with aesthetic cracks. Broderick is at his strongest when he wears his vast erudition and learning most lightly, and when he pauses to ponder why our imaginations have become so captivated by this sub-genre. “Why time travel?” he inquires early on. “Perhaps as an imaginative response to the vast gulfs of time revealed by 19th-century geology and biology, the profound shocks of heredity shaped by natural selection rather than divine forethought, the vast age of Earth and cosmos alike.”

The fiction analyses are followed by a piece on the possible connection between UFOs and time machines, an original short story, and a rich recommended reading list. When writing about Wilson Rucker’s The Year of the Quiet Sun (1970), Broderick observes that “the primary role of time travel fiction is to confront radical physics with both inventive and pedestrian humans and watch what happens.” Thankfully for us, he has spent decades doing this kind of watching, and the result is a delightful ethnography of time travel providing welcome relief from our tempus fugit reality – and dreams of even grander flights through time.