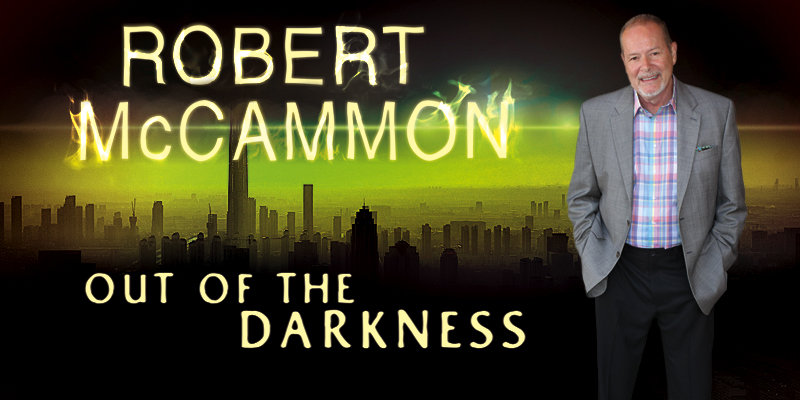 Robert Rick McCammon was born July 17, 1952 in Birmingham AL, where he has lived all his life. He received a BA in journalism from the University of Alabama in 1974, and worked on the copy desk at a lo­cal paper before becoming a full-time writer.

He began publishing short fiction in 1981. His story “Nightcrawlers” (1984) was a World Fantasy Award finalist and was adapted as an episode of The Twilight Zone in 1985. “Best Friends” (1987) was also a World Fantasy finalist, and “The Deep End” (1987) and “Eat Me” (1990) won Stoker Awards. Some of his short fiction was collected in World Fantasy Award finalist Blue World and Other Stories (1989) and Tales from Greystone Bay (2018). The Hunter from the Woods (2015) is a story suite set in the world of The Wolf’s Hour.

McCammon began to move away from horror with Stoker and World Fantasy Award winner Boy’s Life (1992), a Bradburyesque coming-of-age novel with elements of mystery and fantasy. His next book was psychological thriller Gone South (1992). McCammon then took a hiatus from writing for some years, returning with his­torical mystery Speaks the Nightbird in 2002, as Robert McCammon. That book began the Matthew Corbett series, which continues with The Queen of Bedlam (2007), Mister Slaugh­ter (2010), The Providence Rider (2012), The River of Souls (2014), Freedom of the Mask (2016), and Cardinal Black (2019). Final volumes The King of Shadows and Leviathan are forthcoming. He also published standalone novels The Five (2011), The Border (2015), and The Listener (2018).

“I was raised by my grandparents, and they were not readers. My grandfather was a good storyteller, and I remember him telling me ghost stories about his childhood. I’m sure he made most of them up. My grandfather was wealthy, and had begun one of the first department stores in Birmingham. I grew up on a huge estate, really. We had two swimming pools – one for children, one for adults. They had servants, with a servant’s house in the back. I came from an old Southern Gothic sort of upbringing. My grandparents were not well-educated people, though, and they did not understand my interest in writing and reading, though I found writing and reading an escape. Many people find that as an escape when they’re young. My grandparents fought all the time, and I was used as a pawn in the game between them. My most wonder­ful thing was to go into my room and read or write, or ride my bike someplace and just get away. I spent a lot of time by myself. I still enjoy time by myself to think and just be easy with myself, and that came from my childhood. My grandfather and I didn’t really get along that well. He picked up a copy of Swan Song at one point – a big, thick paperback – and said, ‘We don’t live in the same world, do we?’ He never read any of my work, but he never read anything – it was beyond him. He recognized that we were in a different world. He wanted me to go into the department store business, and it was very bullying. I had to start out as a rebel against what my grandfather wanted me to do.

“I initially went into journalism, because that was the only thing I could think of where I could use my interest and talent – I thought I had a talent – in writing. I did do short stories, but who in the world would ever think they could write a short story that would actually sell? I was reading books and short stories, but as a kid I never believed I could write them. So I edited my school paper and I went to journal­ism school, and got a job at the local newspaper on the copy desk. I was writing headlines and editing other people’s stories. I had ideas for feature stories I wanted to do, and did a couple I think were pretty good, but they sold to another newspaper. When I tried to sell stories to the paper I worked on, the city editor said, ‘As long as I’m the city editor for the paper, you will never write a story, because you are on the copy desk. That’s what you do. We have reporters here – we don’t need you.’ So instantly, I hit a brick wall, and had a dead-end job. That editor is still there! This was in 1976 or ’77. I decided, ‘Let me try to do a book’ instead.

“It took me about five months to write Baal – some people pronounce it ‘ball,’ but I pronounce it ‘bale.’ Even after the book came out my editor wouldn’t let me write for the paper, because a novel was not reporting. I kept my job, and worked at a department store and other places as I continued to write. I never thought this would be a career. I did another book and then another one, and suddenly realized there was a demand for my work. It amazed me because I sold the first book I ever tried to write. I never had a trunk novel. I had to learn to write in public. I got a lot of criticism, but those books were the best I could do at the time.

“I learned to observe people better. I began to understand more of what was behind a person’s face, or a person’s motivations, or a person’s words – that there was more to a person, and much more to any question you could think of, than met the eye. I was reading more. My first love of reading was science fiction. I was reading all those great magazines – Galaxy, Amazing, Fantastic, Analog. I loved reading Ray Bradbury – ‘The Lake’ was where I real­ized a story could be horrific but touching. That was his thing. I got to meet him once, and he was always my idol. His work was so heartfelt. I remember reading books when I was a kid, and when I got to the end of a book, I was always a little sad. At the end of a book, you’re leaving those characters forever. You can never come back – you can reread the book, but it’s never like the first time. I have gotten reviews and comments from people who say, ‘I did not want this book to end.’ That, to me, is the greatest compliment. They don’t want to lose you – they don’t want to leave you, and they don’t want to leave the characters that you’ve built.

“Boy’s Life started out as a murder mystery set in a small town. I was writing it and I was so bored. I don’t ever use an outline. I’m not really sure what’s going to happen next. I have an idea – a beginning scene, a middle scene, and I kind of know where it’s going to end, but that might change. I was writing it and I thought, ‘This is so boring. I’m not interested in this at all. So I’m going to do something off-the-wall for me.’ It’s something I’d wanted to do – just write about a year in the life of a boy who wants to be a writer, where he’s influenced by all of these fantastic things in his life and his town.

“I turned it in to Pocket. I had some great editors at Pocket, and great friends there, too. I turned it in and told all my friends, ‘I did well with this book. They’re going to call me and say, “Rick, we didn’t know you had this in you.”‘ Until then I’d been doing steadfast horror work, vampires and ghosts, all that. I had developed a brand, and the publisher liked the brand. My editor called me back and said, ‘Rick, we don’t really understand this book, and we don’t think your readers will understand it either. We want you to go back to what you were writing before, the murder mystery.’ They said, ‘People are going to think you’re writing about yourself’ – and I always thought, ‘Why is that a problem?’ I had signed a two-book contract, so I said, ‘I’m going to be in New York tomorrow. Let’s talk about it.’ The halls at Pocket Books were silent, because they knew I was upset. I said, ‘I really want it to be as it is.’ They didn’t want to publish it because they didn’t understand it. Until that point, I thought that all publishers and all edi­tors and everybody involved in the book business were gods. To realize that they’re not – to realize they don’t get your vision and they’re wrong – was devastating to me. But they published Boy’s Life as it was, with no changes.

“I love those people, and they were great to me, and they certainly paid me good money to do what I did. They took me on autographing junkets, and I did a keynote speech down in Miami for one of their gatherings for Pocket Books, and I was a star for them in that era… but I got so angry at them. I had another book to do on that contract, and that was Gone South. I told them, ‘I want to do something totally different from Boy’s Life.’ They didn’t want that. Suddenly when Boy’s Life got successful, they wanted a sequel. I don’t believe in doing sequels, because sequels are never as good as the original. That’s not always true, but it’s true for me. I felt boxed in again, like the situation at the newspaper. It’s like, ‘No, you can only do one thing. We don’t want you to do something different.’ Gone South wasn’t even a horror novel. They were like, ‘What are you doing? Why are you not doing horror? That’s what you made your name on.’ I wanted to do something different.”

Read the full interview in the November 2019 issue of Locus.