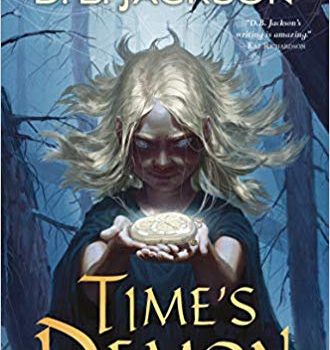 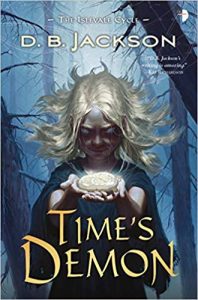 D.B. Jackson’s Time’s Demon is the sec­ond book in a series, the Islevale Cycle, that began with Time’s Children. I had been under the impression that it was the second book in a duology, but events proved this assump­tion wrong. It does its readers the courtesy of recapping the events of the preceding volume in “What Has Come Before: A Summary of Time’s Children,” which was lucky for me, since I could scarcely remember anything beyond “time-travel­ling fantasy boy travels back in time, is instantly aged up to adulthood, and is immediately thrown into the middle of peril and tortures, plus there’s an infant princess to keep safe.”

Time’s Demon is mostly concerned with keep­ing that infant princess safe, as Tobias Doljean is joined by fellow time-traveller Mara, and as they are pursued by assassins who bear Tobias, at least, a very strong grudge. Meanwhile Droë, the child-sized Tirribin time demon, is pursuing Tobias for her own reasons: she’s at least a little obsessed with Tobias, and wants to understand hu­man love – and makes some very unwise bargains in order to begin to do so.

Droë’s story in Time’s Demon is a compelling tale of self-discovery and growth, and as such it contrasts with the narrative threads that follow Tobias and Mara more closely. Tobias and Mara’s plotline is one of marking time: reactive, rather than active, and taking no steps to resolve any of the problems that they encountered in the previ­ous volume. They have not decided whether to keep running with the infant princess or to try to restore her to her throne, and though many months pass in the narrative’s chronology, they don’t begin to consider their options as choices which they might make, which makes the novel feel somewhat directionless.

In part as a result of this, Time’s Demon made very little impression on me as a reader. Time’s Children was a promising opening to a longer story: it had pace and urgency, and its characters directed themselves towards understandable goals. Time’s Demon lacks its predecessor’s tension and direction, and its characters and its voice generally aren’t strong enough to make it a deeply compelling read despite this lack. It’s not a bad book – hell, I’ve thoroughly enjoyed books that are objectively much worse – but it’s hard for me to find it in myself to call Time’s Demon anything but mediocre. It doesn’t speak to me on the level of emotional satisfaction that those objectively much worse books have.