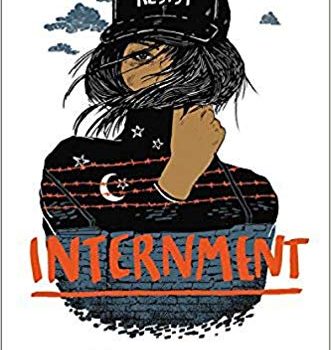 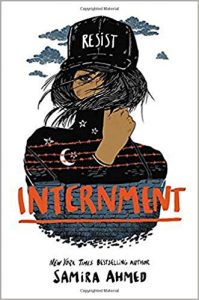 Internment is a breathless novel of our po­litical moment. In that vein, it succeeds com­pletely: it spools out the logical conclusion to the fearmongering and intolerance that currently gathers at rallies and shouts on Twitter, and it posits, with no small amount of real-life proof, that only the people who are teenagers right now have the capacity to effect change. As a YA novel, it walks a difficult tightrope between hard truth and too-scary circumstances, with a bit less success. It may not serve well as a permanent record of our times for future readers, but as a read for right now, it’s sublime, propulsive, a TKO.

The book takes place in the immediate future. The government has begun rounding up Muslims, based on their answers to a census question, and relocating them to a newly built internment camp. Our heroine, Layla Amin, is a middle-class girl from Los Angeles, a senior in high school who likes tennis and loves her white-passing boyfriend. She and her family are transported to Camp Mo­bius, near the former Japanese internment camp Manzanar (and Death Valley). The camp has FEMA trailers, arranged by nationality, prepared for the internees. The conditions are not appalling, but they are grim.

The rest of the book is a reasonably familiar narrative of life in a prison camp: small moves, big consequences. Layla refuses to adjust to life in the camp, or to “go along to get along,” as her parents and many of the other adults do. She makes alliances, resists her captors, smuggles informa­tion into and out of Mobius. There is violence, and injustice, and a great deal of fear, and tragic death. There is also a fiery spiritual battle against tyranny, and a careful unpicking of different moral positions. Finally, good triumphs and evil loses – the battle, not the war, alas.

To judge it as a YA novel, briefly: Internment has plenty of bad language, both from the bigots and from the good guys, but Layla’s relationship with her boyfriend is quite chaste. The violence against her never goes farther than a punch, which seems unrealistic in her circumstances, but is more bearable for the reader. Ahmed telegraphs Layla’s fear and her courage in equal measures, demonstrating usefully that even heroes get scared: “When I hear the words in my mind, they sound brave, but coming out of my mouth they are weighted down by fear.” She’s Emma González, crying openly but standing all the same at that podium. And just like González, Layla acts in resistance because she must, because this is the world she lives in, despite adults who’d protest she’s too young to understand or have her own opinions. If she is old enough to understand being taken from her home to an internment camp (or to be shot at by a machine gun) for no reason, she is old enough to be heard as an activist.

The book is unapologetically partisan, in that the only solution to fascism is full-throated protest. In this regard, it sometimes feels like it’s lecturing, or even hectoring, especially when the narrative touches our current situation more closely than the near-future situation Ahmed has created. (The two aren’t that different.) This occasional tone, and the ripped-from-the-headlines relevance of the book, make it a little hard to determine whether Intern­ment has staying power. Perhaps it’s too tied to 2019 to make sense to a seventeen-year-old in 2059. Then again, fascism may be unfortunately perennial. Anne Frank could have written a book like this one from inside Bergen-Belsen, and we’re still reading her story nearly 80 years later.

Ahmed skillfully uses the words of others to offer solace to her young characters: Layla screws her courage to the sticking-place, she follows the example of the White Rose (German students who wrote pamphlets of protest against the Nazis), and she finds inspiration in her father’s poetry, Star Wars, and even Friedrich Nietzsche: “He said something like, all I need is a sheet of paper and something to write with and I can turn the world upside down.” In addition, Internment is incred­ibly involving. A strong, innocent character in an unjust situation tends to pull the reader along rap­idly. This reviewer’s heart remained in her throat for almost the entire page count, hoping Layla would survive without losing too much. Of course, she has already lost an essential right guaranteed her by this nation’s founding document: freedom.

The book never specifies the name of the president in power, but the stand-in for the cur­rent American president is the Director of Camp Mobius. He is somewhat cartoonish, with purple lips and on-the-nose bigotry, but then, the real world is also populated with cartoonish villains at the moment. Toward the end of the book, he offers Layla her most useful lesson:

At their core, bullies are cowards… He can still hurt me. Kill me, even. But he will never win. Remember who the enemy is. I’ve been fighting myself. My fear. My failures. That’s the wrong fight. The fight is in front of me. 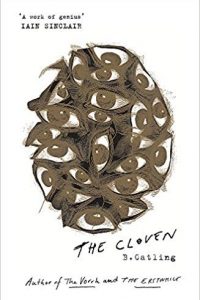 Katharine Coldiron Reviews The Cloven by B. Catling