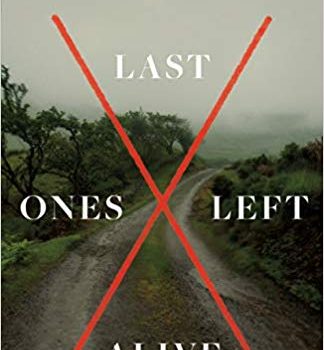 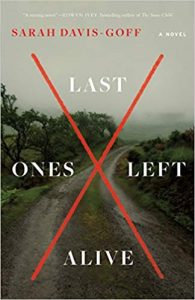 If you were to ask me what was the one horror trope I found tiresome and repetitive, where a millennia-long moratorium on any future work wouldn’t go astray, it would be the zombie apoca­lypse. As far as I’m concerned what needed to be said about zombies was covered by George Romero, and everything since then – includ­ing Romero’s later films – has, aside from the odd outlier, been a case of diminishing returns. Given my strong position on the matter, you’d be justified in asking why I chose to review Sarah Davis-Goff’s zombie apocalypse novel, Last Ones Left Alive. It’s largely because I have a deep fascination in authors outside the specu­lative community – you won’t find their short fiction in Clarkesworld or Asimov’s, and they don’t attend Clarion workshops – who decide to tackle a sub-genre that has been well and truly strip-mined. It’s also because, while this is a de­but novel, I’m familiar with Sarah Davis-Goff’s other creative endeavour as co-founder with Lisa Coen of Tramp Press. As an independent publisher who champions and specialises in Irish fiction, they have published some extraordinary work, including one of my favourite novels of the last decade, Solar Bones by Mike McCormack (which deservedly won the Goldsmiths Prize back in 2016). I was, therefore, curious to see what Sarah Davis-Goff, someone whom I already admire for her literary tastes, would bring to this worn-out subgenre.

Last Ones Left Alive is set at an unspecified time in the future where many decades (possibly centuries) previously a worldwide event called “The Emergency” devastated the planet. It’s never made clear by our teenage narrator, Orpen, what brought about this Zombie – or should I say Skrake – Apocalypse, but given the pathology of a Skrake bite – the slow and horrific way it gradu­ally eclipses a person’s memory, their identity – I’m going to guess the escape of a genetically mutated virus from a top-secret lab. In any case, when the novel opens, Orpen, having lived most of her life on a secluded island off the west coast of Ireland, is travelling toward Dublin, seeking sanctuary in a place called Phoenix City. Along with Orpen is her dog, Danger, and Maeve, her mother’s partner who lies senseless in a wheel­barrow, recently bitten by a Skrake.

At first glance, Last Ones Left Alive cleaves closely to the tried-and-true Zombie Apocalypse formulae. There’s a resourceful, young girl, who journeys across a ruined landscape of crumbling buildings, rusting cars, and the dusty bones of the dead. From time to time she confronts a Skrake – as zombies go they are more Return of the Liv­ing Dead than Night of the Living Dead in that they run rather than shamble – and she dispatches them with her finely honed knife skills. She inevitably encounters other survivors and, after some wariness, they band together. We know at some point one of them will be chewed on by a Skrake. As generic as that sounds, Davis-Goff makes several astute and sympathetic choices that push against the traditional post-apocalypse nar­rative. The flashbacks to Orpen’s childhood are not only thankfully free of abuse, she is also not exposed to a hard-scrabble, subsistence existence, surrounded by people who couldn’t care less if she lived or died. As Orpen tells us:

I had a childhood and it was happy, and the fact that my mother and Maeve were able to do that for me while the country was ate around us says probably everything anyone needs to know about them.

I also can’t recall ever reading a post-apoca­lypse novel (zombies or otherwise) that has such an intimate and sensitive regard for the natural world. Ireland might be in a state of decay and overrun by monsters, but Orpen’s curiosity and excitement mean that it’s never depicted as mis­erable or grim – “the world ended a long time ago but it is still beautiful.” Arguably, the most subversive aspect of Last Ones Left Alive is that the introduction of a male in a female-dominated narrative does not end in the brutal rape of the main character. Yes, Orpen is justifiably fearful of Cillian, but he is sensitive and thoughtful, nary a misogynist bone in his body. When feelings develop between the two, Goff-Davis avoids the icky power dynamics of an older man taking sexual advantage of a younger (much younger in this case) woman.

Last Ones Left Alive ends with a fascinating reveal which muddies Orpen’s conception of her identity and her relationship with her mother and Maeve. As this wrinkle occurs late in the novel, I can only assume that a sequel is in the works. I hope so. This is a zombie apocalypse I’d be happy to revisit.